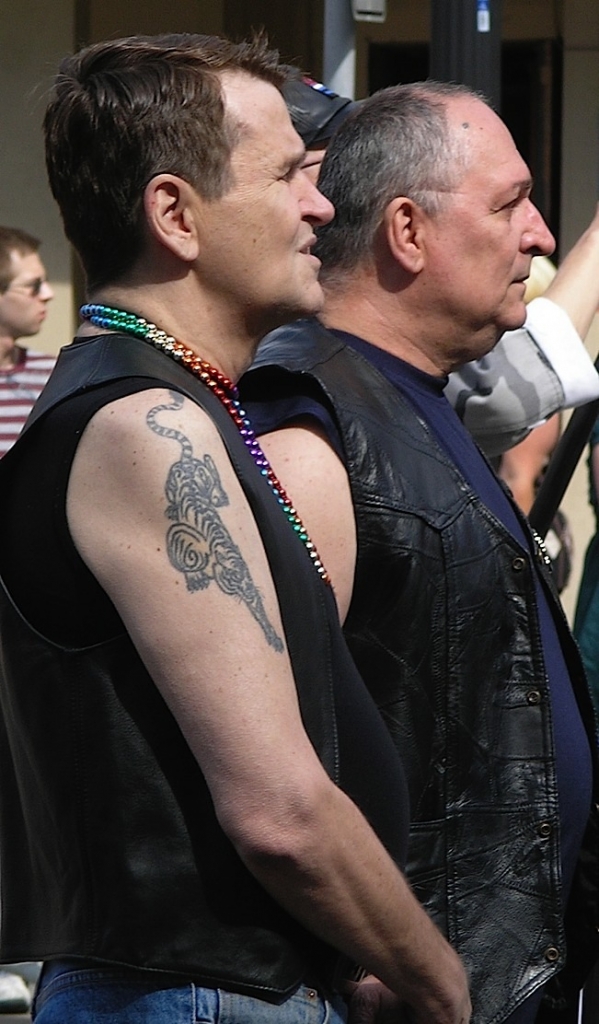 Colin Spriestersbach and Carl Gscheidmeier in 2008 at the retirement ceremony for the original leather pride flag. Photo by Bill Schlichting.

Minnesota’s giant rainbow and leather pride flags have been part of the annual Twin Cities GLBT Pride Parade (now called the Ashley Rukes GLBT Pride Parade) since the original giant flags first made their appearance in the parade in 1998.

In keeping with this year’s Minnesota Leather Pride theme of “American Leather Story,” here is the story of the creation of the original giant flags, as told by Gscheidmeier:

It all started one day, sitting at the Brass Rail with Colin having cocktails, when the topic came up of having a flag made to begin the parade. Colin knew that I did sewing for the Black Guard shows and for Allison, so he asked if I would be interested in making the flag. I said sure. His thought was to have someone like Adam (who was then the bouncer at the Gay 90’s) carry it. He wanted a large rainbow flag and someone to carry it who was strong enough to handle it in case of strong winds.

Being the type of person that I am, I like doing things in a grand fashion. I then said, “Why not make it something worth talking about? If New York City can have big things like the Macy’s Thanksgiving Day Parade with all those balloons, let Minneapolis come up with something bigger and better. I’ll make a rainbow flag representing the gay community, and a leather flag representing our leather community.” Colin thought that was a great idea.

That was when I really got excited and said, “I’ll go all the way and make the flags curb-to-curb and a block long.” Colin’s eyes just about exploded. I said, “If you get the materials, I’ll make them.” We both said that would be really grand and put Minneapolis on the map.

At the time, New York had a rainbow flag but it wasn’t sewed together. They just had rows of material loose. Mine was all one piece of material. As for the leather flag, to my knowledge there were none bigger. Both flags measured approximately 50 feet wide and 75 feet long.

A few days later, Colin picked up bolts of fabric of each color and delivered them to my apartment, where I would then spend the next few weeks in the basement sewing them all together, creating the rainbow flag first. It took about 3-1/2 months to sew both flags. Sometimes I thought they would never get done.

The flags were funded by Colin 100 percent. The fabric came from Michael’s. I wanted the fabric to be light, bright, and sturdy so it would not rip at the seams.

The sewing machine I used was a home Singer machine. All the seams had to be done two or three times so they would hold together.

The basement where I did the sewing was rather small, about 30 feet by 50 feet. I used a ping pong table with the sewing machine on one side and the material to be sewed by my feet in back of my chair. The material went over my head, into the machine, was pulled across the table and folded on the floor at the other end of the table.

A special thanks should go out to Dan (Colin’s partner) for helping figure out the size of the red heart to be put on the leather flag, and to Tom Weiland and Mike Delorme of the Black Guard for helping me a couple of times just pulling the material back and forth over the table.

The flags were done, and now it was Sunday, June 28, 1998 — time for the flags’ first appearance in the parade:

At the beginning of the parade route, the flags were folded up in a rectangle. The persons holding the corners of each flag were told to head toward the corners of the intersection (one heading left, the other heading right).

As the flags were opening, they got bigger, and bigger, and bigger, and all I could do was cry with happiness. I was so overwhelmed at the size of these flags, I just couldn’t believe it. I was at the front of the rainbow flag between the yellow and green colors, and watched this creation come alive. What I created with my sewing machine was totally a gift of my labor to the community to enjoy.

These original giant flags were part of every year’s parade until they were retired and replaced in 2008 (leather flag) and 2009 (rainbow flag). Every time you see the current giant flags, remember that they are in the parade because of the inspiration and actions of two gay leathermen, and the flags’ continuing presence in the parade is also a testament to the Black Guard of Minneapolis. 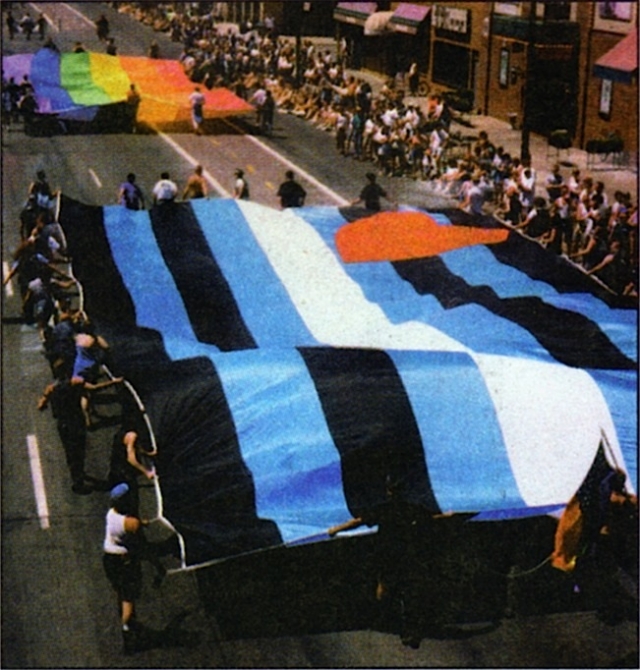 The first appearance of Minnesota’s giant rainbow and leather pride flags in the pride parade, June 28, 1998. Photo by Sherman Ford.