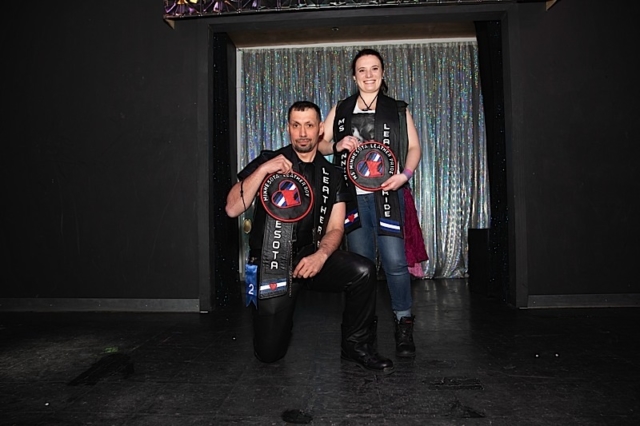 Two titles were awarded—and, surprisingly, one was not—at the 2018 Minnesota Leather Pride contest weekend. The contest was held Saturday evening, April 7, 2018 at LUSH.

The weekend started with a Meet and Greet on Friday evening, April 6, at LUSH. This was followed by a cigar social presented by the Twin Cities Girls of Leather and the Atons of Minneapolis.

On Saturday morning, Kink U sessions on whips, parenting, and saline infusion were presented at eagleBolt Bar and The Saloon. At noon, a contestant roundtable discussion took place in the Fire Bar at The Saloon. The roundtable was a chance for the audience to get to know the contestants better by hearing them answer the types of questions usually asked in the contestants’ private interviews with the judges.

Saturday evening’s contest and show at LUSH began with a moment of silence for the loss of Sam Carlisle, who was instrumental in making Minnesota Leather Pride what it is today and whose memorial service had been held at The Cowles Center that afternoon. Then, after a blessing by the Ladies of the Lakes, Minnesota Sisters of Perpetual Indulgence, the evening got underway.

The contest and show included many memorable moments and a few surprises. Among the fantasy performances, Rosie drew cheers (and her fantasy partner drew a few boos) as she topped someone wearing an orange-haired mask that made him look very much like the current occupant of the Oval Office. After Rosie’s fantasy, emcee Ryan Brown quipped, “I think Stormy Daniels could probably learn a thing or two from our Miss Rosie.”

And Mikayla, the outgoing Ms Minnesota Leather Pride, addressed bigotry within the leather community: “As your titleholder this year, I have felt loved and welcomed by most of you.” After that surprising statement, she continued, “A new era is on the horizon for this community, and that era includes transgender people, people of color, women, young people, and many more minority groups… If you hold the opinion that because I am a woman, or because I am a transsexual woman, I don’t belong on this stage or in this community, you are no longer in the majority. In this new era, you are in the minority—because the majority of the people standing in this room tonight want me here.” She concluded by cautioning leather community elders uncomfortable with changes to the membership and makeup of the community, “Do not let bigotry be your legacy.” Her speech drew a standing ovation.

Mikayla’s speech was followed by a surprise covering ceremony in which Kurt Patton jumped up on stage, told Mikayla what a great job she had done during her title year, and concluded by handing her a leather Muir cap and saying, “You’re gonna look damn sexy in this hat.”

And then there was another surprise—and, unfortunately, not a pleasant one. When only one contestant is competing for a title, that contestant must score a minimum of 60 percent of available judging points, plus one more point, to be awarded the title. It was announced from the stage that the contestant for Minnesota Leather Sir did not score enough points to be awarded the title, so the Minnesota Leather Sir title sash will remain vacant for the year.