Leather Life: A Gallery of Local Leather Luminaries Plus Web Extra: The Stories Behind their Speeches 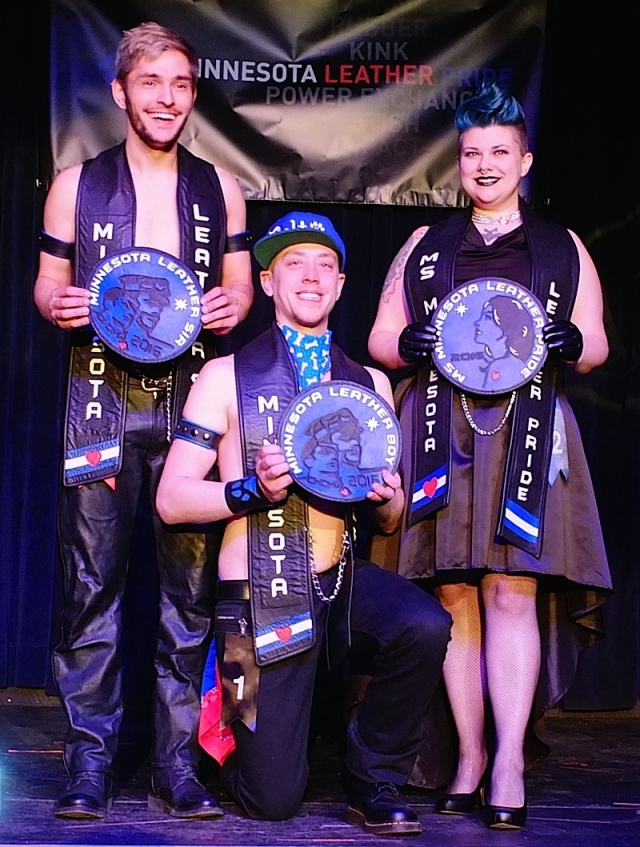 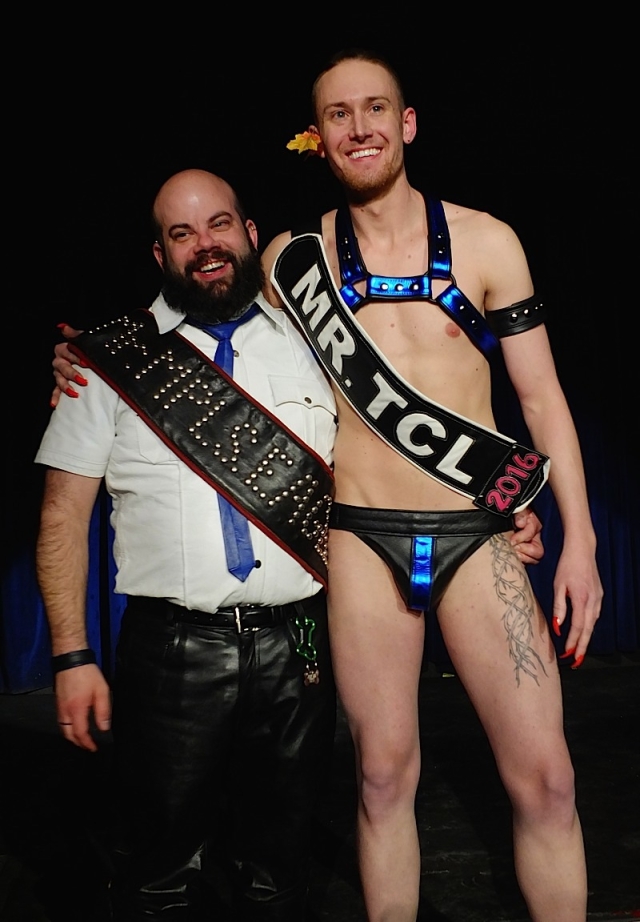 Best of luck to L. Russell Waisanen (left) and Emerson Kellogg (right) as they represent Minnesota in the 2016 International Mr. Leather contest, May 27-30, in Chicago. Waisanen is Mr. Minneapolis Eagle 2016 and Kellogg is Mr. Twin Cities Leather 2016. Photo by Steve Lenius 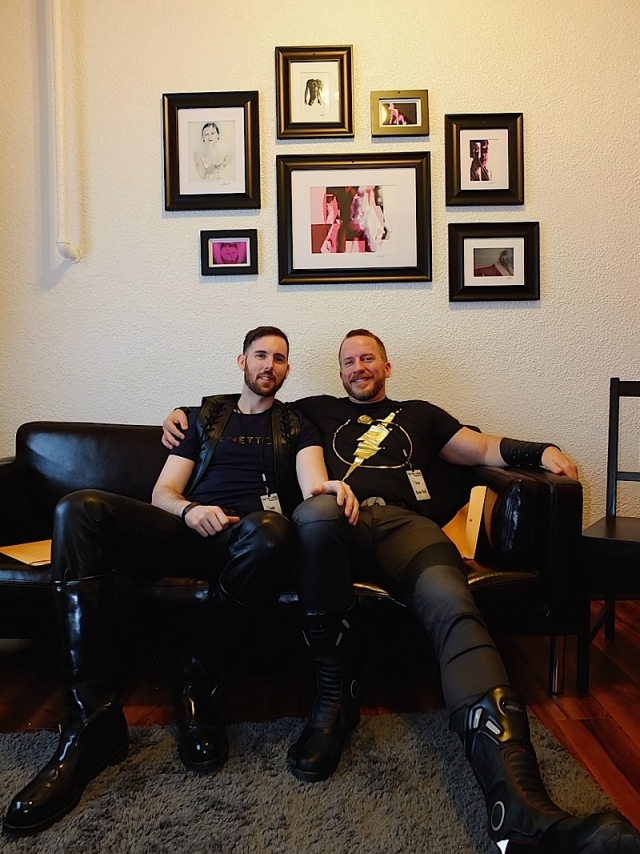 Kevin Murphy (left) and Brian Donner (right) during their recent joint interview at The Saloon in Minneapolis. Photo by Steve Lenius

During the 2015 International Mr. Leather (IML) contest, memorable speeches were made by Kevin Murphy (Mr. Leather Ireland 2015 and IML first runner- up) and Brian Donner (Mr. Tri-State Leather 2014 and IML second runner-up). Both men were in Minneapolis recently and I had a chance to ask them a few questions.

Web Extra: The Stories Behind their Speeches 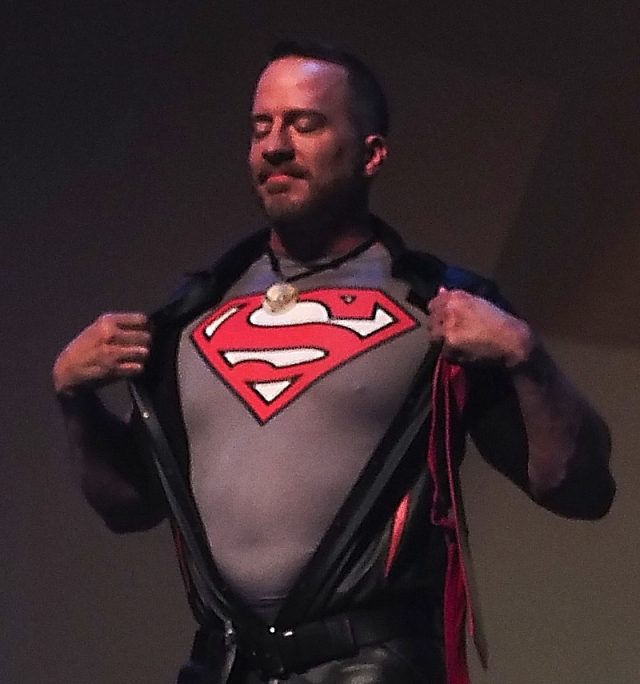 Brian Donner revealing his Superman shirt during his speech at IML 2015. Photo by Steve Lenius

Brian, tell me about your speech wearing the Superman shirt. How did that idea come to you?
Brian Donner: The superhero thing and comic books have been a big thing for me, and I felt like I could tell my leather story as a part of that. Every time I’m out in my comic- inspired leathers, I have someone come up to me and talk about them. It resonates with them. I had my formal leather uniform shirt, and the Superman UnderArmour shirt, and it just occurred to me one night—what if I did a full Clark Kent reveal on stage?

What I was trying to say was that everyone has the ability to make the world a little bit better where they are, if they choose to. But you have to choose to.

When I came out on stage and whipped off my tie I did it rather dramatically because I had to make sure it was gonna come off. I had only gotten that tie that day, so I never had a chance to practice with it. I was afraid it was going to get stuck, so I whipped it off, and there are a couple pictures of this big dramatic arc of this red tie during my reveal. 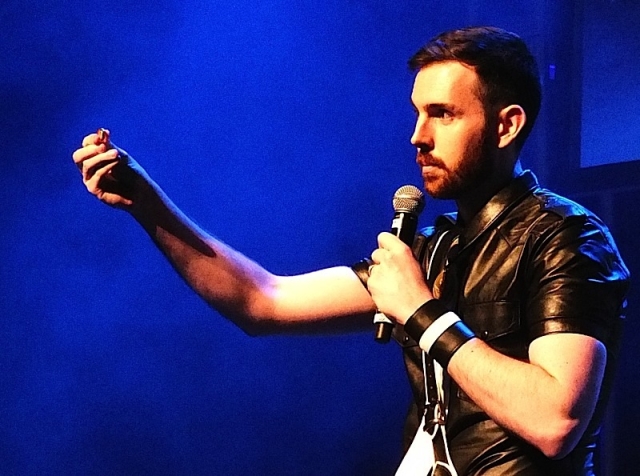 Kevin Murphy proposing to his partner Rob during his speech at IML 2015. Photo by Steve Lenius

Kevin, your speech surprised everyone by including the first marriage proposal ever from the IML stage. The voters of Ireland had approved same-sex marriage the day before your speech.
Kevin Murphy: A lot of things just aligned. The proposal wasn’t preplanned to be part of the speech. That was something I decided that morning. I suppose the back story to myself and my partner Rob is that we got a civic partnership many years ago. We were one of the first couples to get partnered. Whenever same-sex marriage came to Ireland, I was going to propose to him again. We were fairly sure that the vote was going to go through, so I secretly brought our original engagement rings, from when we had the civil partnership, with me to IML. I wanted to create a moment between us during the weekend when we were alone together to propose to him after the vote had passed.

But I came to realize very quickly that we would not get any alone time together. Any time we did spend together, it was maybe half an hour and I’d be gone again. I didn’t want to propose to him and then be gone for six or twelve hours, and not see him except from the stage.

So that morning I decided to change the end of the speech. I tried practicing it myself in the room when he wasn’t there, and I couldn’t stop myself from crying. I was worried that I was going to break into tears onstage and not actually say anything, and people would be wondering, what the hell is this? And if I didn’t get into the top 20, then it wasn’t going to happen [because I wouldn’t be giving a speech]. So I said, look, I’m gonna do it—assuming I make the top 20, please let me not break down during the speech and start crying, and please let my speech be under 90 seconds so they don’t turn the microphone off right as I’m about to ask Rob to marry me.

The other thing is, I couldn’t see the audience. I asked friends, look, can you make sure he sits close up front? Which they did, but he’d gone out and bought himself a new leather shirt that day, so he wasn’t wearing something that I could recognize. It was actually the moment I was walking out on stage to give my speech, I spotted him in the audience. At that moment I knew I’m gonna go ahead with this.

Everybody has seen the video of the speech back home, all my family, all my friends. Even people who I haven’t seen in years come up to me and say, man, I saw that video, and I broke down crying.