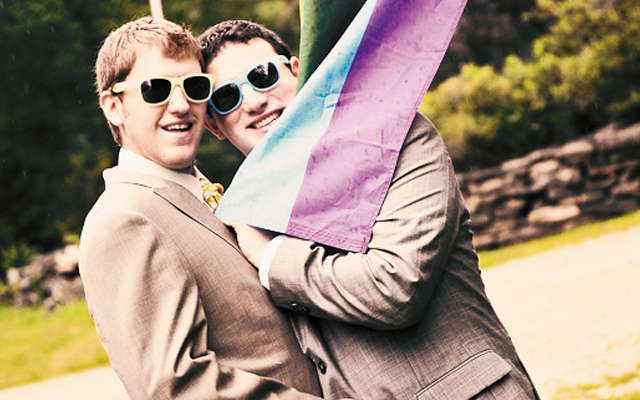 It was a Halloween night filled with costumes and dancing at the Saloon.  A young Chad Kampe was a senior at Macalester College at the time when he randomly convinced himself to take a study break. So he dressed himself up as a Tennis Pro and hit the Saloon. It was that night nine years ago when Matt Felt decided to do the same and went out as a Pro Wrestler. They spotted each other on the dance floor and the rest was history. “We have similar ideas about what is fun, and really seem to understand each other,” Chad confessed. A couple years later, they decided to get married but the proposal was not needed. They just knew that it was the right thing to do. “It was very natural,” they explained to me. In the mountains of Western Massachusetts, they rented out a property and invited close friends and family. A total of 150 people: “That shows us just how much people really do care about us.” The wedding was a special and meaningful occasion. It was their first chance to publicly declare the love the have for each other in a larger group. Before, the nerves of holding hands or even kissing in the street was not always appreciated. A majority of their guests stayed on the property as they celebrated their love on both Friday and Saturday. Each night the dancing continued until about two in the morning. Throughout the day, they had activities such as wine tastings and jazzercise classes. Overall, it was a colorful weekend of pride and love. The idea of a life together, raising a child, traveling the country are all what brings this couple their deserved happiness. The willingness to offer your life to another does not necessarily make you happy. It is sharing your lifetime with the person you care for the most with the expectance of only love in return. 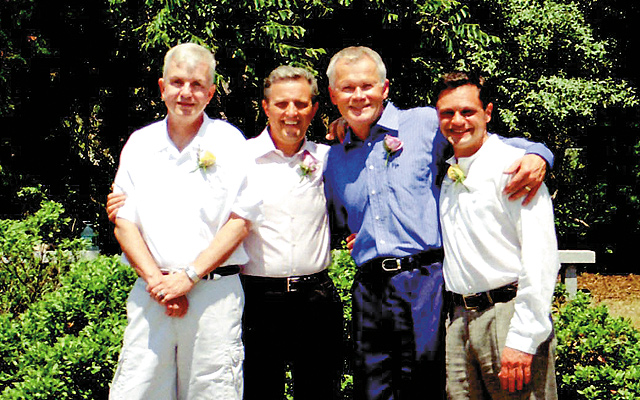 Don Ofstedal and Jerry Lee met in the early 70’s in a now defunct bar called Suttons. Sitting around the bar, their eyes met. They struck up a conversation that made them want to get to know one another better. Over a year later, they moved in together. It was at the time where they were moving back and forth from San Francisco to Minneapolis that their relationship thickened. They were in their 20s that night they met at the bar, and 40 years later they are still together. Having that strong support and unconditional acceptance was key to enhancing their relationship. They try to never go to bed with an unresolved conflict between each other and have a high respect for one another as individuals. When Massachusetts passed the legislation for gay marriages, Don and Jerry undoubtably agreed to tie the knot. They went online and applied for a license and made arrangements with the justice of peace in Provincetown to complete the ceremony. In June of 2004, they were married. A quick four years later, they decided to remarry in California, as well. They are even not eliminating the possibility of a third marriage. I asked them for their secret and they replied, “It’s not all easy to say exactly what has worked for us, but certainly the support of nearly all of our friends and family gave us a foundation that helped us grow over the years.” Don then gave me a word of advice, “Having the encouragement of our friends and family all seemed to enrich the life we have had together and, also, the life we still have ahead of us.” 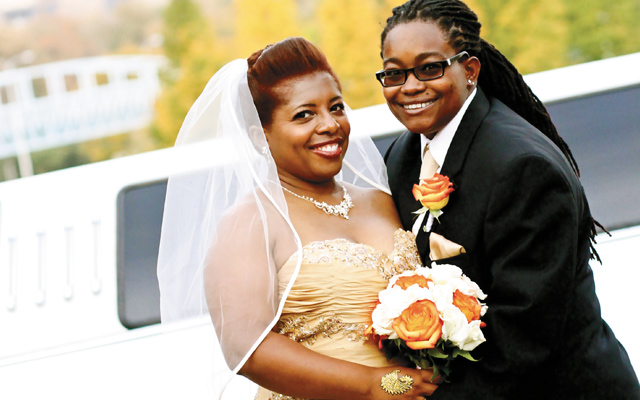 Patricia and Sonia – Proposal One and Proposal Two:

How would you spend all the days of your life together with one person? I asked Patricia Rhodes and Sonia Wright, “Laughing!” They replied. They met each other years ago in California while visiting a friend. Afterward, the memory of one another stuck with them as they progressed as close friends throughout the years. They fell in love and in 2006, they started dating. Patricia became defenseless against Sonia’s smile and in 2007 they became domestic partners. A year later, they both knew the time was right for a more meaningful commitment.

In July of 2008, Patricia got down on one knee, holding a gorgeous diamond ring, and asked Sonia to marry her. Sonia was speechless and dazzled by the beauty of the ring. She was worried about the expense Patricia invested and suggested getting a more affordable wedding band. One day while Sonia was reclining in a chair, the ring fell in the cracks of the cushions. After much panic and determination to recover her ring, she could so longer imagine her finger wearing anything else.

When the time finally came, they set the date three weeks in advance of their wedding day. Even with such  short notice, they had full support of their families and were able to make a dream wedding come true. Patricia and Sonia were married on 10-10-10. “Marriage is important to us, it helps our children feel secure and our extended family recognize our level of commitment to each other,” they told me. In the future, they see only brightness. “We are just really happy, and excited to share the rest of our lives together raising our kids and growing old.” 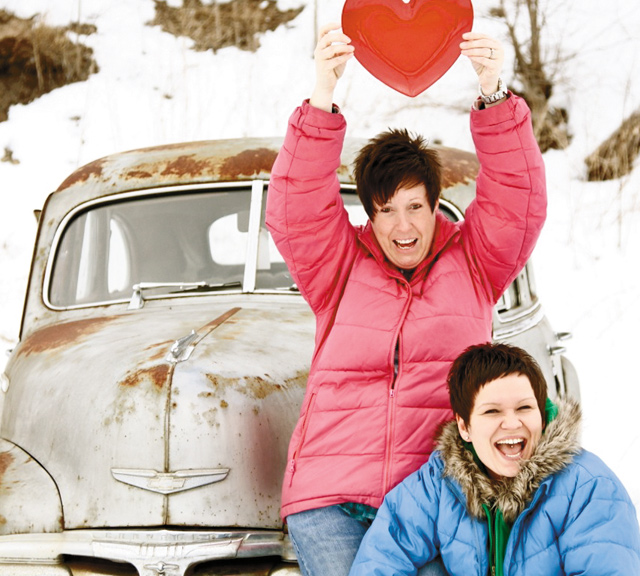 Ania and Molly – The Best of Two Worlds:

Ania Nadybska traveled from Poland at the age of 19 on 9/11 with high aspirations of experiencing new endeavors and an education in the United States, unaware of the happiness ahead waiting for her to unravel. Molly and Ania crossed paths while working together in her sister’s restaurant back in March of 2003. Hypnotized by her thick accent, Molly Ahern was literally hooked at hello.  Immediately, Molly was drawn to Ania as soon as she saw her outgoing personality and captivated by the radiance of her smile. Neither Molly nor Ania were out at this point but, after about a year of flirting, their relationship became almost enviable. Molly gathered up enough courage to take the first leap and ask Ania out on a date. Joyfully, Ania accepted.

The first date was at the Lagoon Theatre where they shared their first kiss. They have been together ever since, eight years. Molly has a deep understanding and enthusiasm for learning the tradition and culture of Poland, so when Molly knew she wanted to propose she practiced for weeks the translation into Polish. Molly’s sister, Kelly, helped in the planning as the family took off to Costa Rica. Molly and her sister picked up a ring and packed it secretly on the trip. The execution had to be perfect so the decision was made to go on a horseback ride through the rain forest and end up at a beautiful waterfall.  When they reached the waterfall, Molly was amused to discover that is was actually Costa Rica’s dry season and there was barely a stream to be seen. Regardless, the feelings remained abundant. On one knee in front of that tiny stream, Molly looked up at Ania and asked her for a lifetime together. “I absolutely love the feeling of knowing that I have someone as wonderful as Molly in my life,” Ania professed. Today, Molly and Ania are still hoping for Minnesota to pull through on marriage equality, but in the meantime they continue each day together. “I would marry her today if I could,” Molly told me. Molly and Ania give reassurance that love truly does inspire one another to become better people.