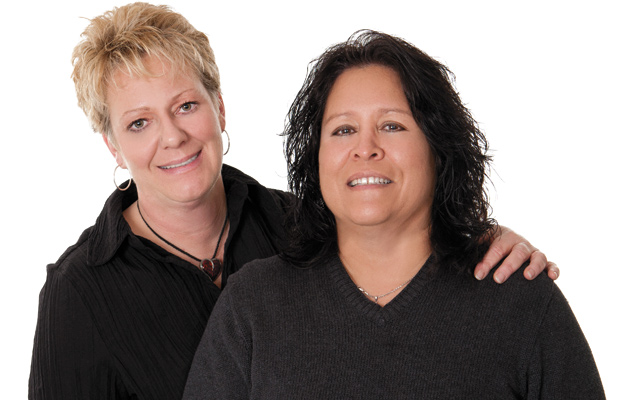 Every romantic couple comes with a unique story. Some loves stories are told and retold, embellished and perfected in order to become a perfect storyline fit to be made into a romantic comedy. And some romances begin simply through a beautiful connection between two people—no bells and whistles are needed to turn an everyday situation into something extraordinary. On October 1, 2006, a typical night at a lesbian bar in Denver turned into the beginning of Shirlyna and Traci’s love story.  Theirs is a love story that’s real—no huge romantic gestures, no perfectly-scripted scenarios—just two people finding the soul that makes theirs complete.

When Shirlyna and Traci locked eyes across the dance floor, the physical chemistry was hard for Traci to ignore. The confident woman walked straight up to Shirlyna and requested a dance, a request that Shirlyna shyly declined due to the song selection. As Traci was about to leave, Shirlyna stopped her and clarified, “I just don’t want to dance to THIS song…maybe the next one?” When an acceptable song came on, Shirlyna and Traci held each other close, dancing eye to eye on the crowded dance floor. The two continued to dance and talk until 5:00 am, when they both began to realize that their evening hadn’t just been a fun, flirtatious night out.

As Shirlyna and Traci began their relationship, they soon realized that they were at different levels of being “out” in public. Traci had been living as an out lesbian in the Colorado community for quite some time, while Shirlyna (after ending a traditional marriage) was not comfortable being openly gay in public. As an early date ended in the parking lot of a popular steakhouse, Shirlyna warned Traci that she couldn’t kiss her in public. Not hearing what she had said, Traci swooped in and kissed Shirlyna, then responded with “I’m sorry, I missed what you said!” Though initially taken aback by Traci’s openness and comfort in public, Shirlyna felt that their relationship was too important to keep secret, and the two worked together to ease into their status as a couple.

With the strong connection between the two, they found it very hard to take things slowly. “We U-Hauled it; it’s true,” Shirlyna admits with a laugh. The two tried to keep their children in the dark as their relationship blossomed, especially Shirlyna, as she was concerned about how her kids would deal with their mother being a lesbian. Traci recalls one humorous evening when they were snuggled up on the couch and watching movies.  As the women drifted off to sleep, Shirlyna heard her girls come home early. She panicked and pushed a sleeping Traci off the couch to avoid getting caught. Though they look back and laugh at that night, they acknowledge that the fear of what their children would think was difficult to endure. Traci says, “It’s not like you can end a relationship with your kids because they don’t agree with your lifestyle. They’re your kids!” The women eventually decided to tell their children about their relationship and both families have grown to love and accept the couple.

As the two women recall the beginning of their relationship, they admire each other from across the table. They smile and their eyes twinkle as each woman hears the other speak of their beloved’s most endearing qualities. Each woman is surprised by what the other says she loves, and Traci notes that “we don’t necessarily talk to each other like this when we’re one-on-one.” Traci likes “how bubbly Shirlyna is,” and how much she likes to laugh. “She has gorgeous eyes, and she was so fun to watch across that room on the first night.” Shirlyna jokingly recalls being drawn first to “those white pants” Traci was wearing as she caught Shirlyna’s eye from across the room. Then Shirlyna’s voice softens as she describes Traci’s compassionate nature, the way she carries herself, and her welcoming smile. After eight years, Shirlyna is “still in love with her—I haven’t ever stopped being in love with her.”

The couple recognizes that communication is key to making their relationship work. As self-proclaimed “complete opposites,” Traci appreciates that Shirlyna is “uncomplicated in every way that I’m complicated.” Traci notes that she is the type of person who would “dive head first into an empty pool, but Shirlyna’s there grabbing my ankles and telling me to ‘wait a minute.’ She’s very practical. I am not.” Traci believes that people mirror one another: “You’re either drawn to or pushed away from traits you either desire or don’t have yourself. She has the traits I don’t have, and we balance each other out.” Shirlyna’s realistic nature balances out Traci’s impulsive side, Traci’s emotional openness has encouraged Shirlyna to become more aware of her feelings and how she expresses them. Shirlyna initially struggled to open up about her past experiences and her emotions, but Traci’s support and encouragement allowed Shirlyna to process and express her feelings in a healthy way. This balance, and their ability to communicate, keeps their relationship strong and healthy as they tackle whatever life throws their way.

Over the past eight years, the women have made memories by cooking together, traveling around the country, nurturing their relationships with their children and grandchildren, and enjoying each other’s company around bonfires with friends. They’ve learned a lot along the way (including the truth behind the warning that you should never add bubble bath to a Jacuzzi), and they’ve kept their focus on what they believe is most important: their families. Marriage is a possibility for Shirlyna and Traci, but they don’t know when the big day will be.  Yes, this is a “girl-gets-girl” love story, but their future is anything but scripted; they just know that they will begin and end each day together, hand in hand.