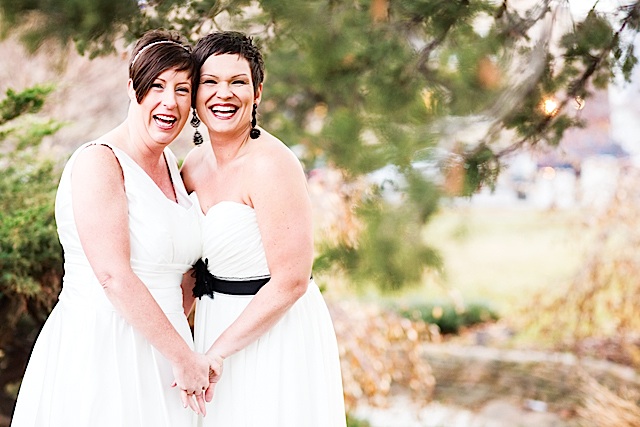 What may sound like the start of a bad joke is actually how Molly and Ania’s love story begins. Ten years ago, Molly was working as a business manager for her sister’s restaurant when Ania, a new server, walked past with a training group. Though Ania caught Molly’s eye when she walked by, it was her thick Polish accent that captured Molly’s attention. Molly recalls, “When she stood up and said something, I was like, ‘I’m in love with this girl’…I didn’t even know her. I heard her speak, and I knew I wanted to date her.”

After weeks of flirting, Molly asked Ania out on a date. In an attempt to impress Ania, Molly planned to take her to an epic period piece movie. The women quickly realized something was strange when “the previews started, and one preview kept going and going…we realized we went to the wrong movie.” What they thought was an artsy period piece was actually Napoleon Dynamite. The women laughed through what became their favorite movie, and they’ve been laughing together ever since.

The women quickly fell in love with each other. Ania was drawn to Molly’s personality and sense of humor. Molly valued and respected Ania’s Polish culture and loved Ania’s winning smile. They became partners in life and business by turning their shared love of photography into their own studio, am photography. When they aren’t working their full-time jobs (Molly is a social media specialist, and Ania is a director of online content strategy and branding), the dream duo works together to capture everyday moments and special events.

After several years of dating, Molly decided that she wanted to take the next step. When the couple traveled to Costa Rica in 2009 with Molly’s sister and brother-in-law, Molly planned the perfect proposal. With the help of her sister, Molly scheduled a horseback-riding excursion that promised to end at the base of a glorious waterfall. The excursion ended after a hot, sticky, and sweaty ride through the jungle, when they arrived at the most disappointing waterfall the women had ever seen. “It was a total letdown because it was the dry season,” Molly recalls. “The waterfall was really just a trickle, and the water below was green and nasty.” 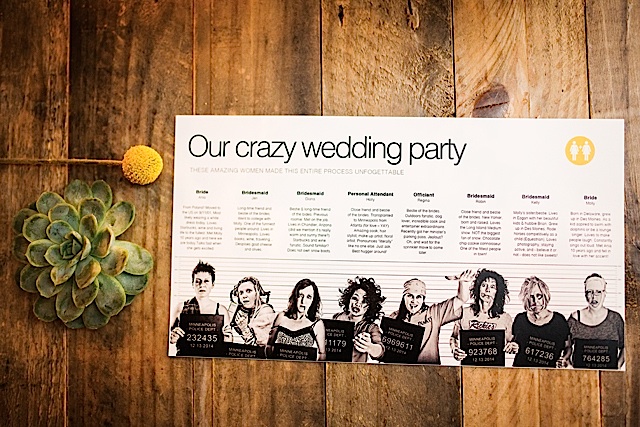 With the encouragement of her sister, Molly decided to go forward with the proposal as planned. Molly’s sister herded all the tourists away so the women could share a private moment by the lackluster waterfall. Ania had no idea what was going on until Molly got down on one knee and asked her “Will you marry me?” in Polish. Ania recalls, “I was very impressed because in Polish, ‘Will you marry me?’ is very dependent on the gender and the time of the proposal. You can say it so many different—and so many wrong—ways. She said it perfectly.”Ania joyously agreed, and the couple celebrated their engagement.

After ten years of being together (and a four-year engagement), Molly and Ania tied the knot on December 13, 2014. The women had a casual ceremony and reception at Spill the Wine in Uptown Minneapolis. Ania notes, “We wanted it to be with the people we love…full of love, emotion, and humor.”

One humorous aspect that made quite an impression on guests was the program. Ania and Molly were asked many questions leading up to the wedding, including the classic lesbian wedding question—“Who’s wearing the dress?” The women took all those questions and provided funny yet informative answers in their Practical Guide for Attending a Lesbian Wedding. The program also introduced the wedding party in an unconventional way; Molly and Ania flipped their guests’ expectations around through a mugshot-themed bridal party photo.

The couple worked closely with Todd Pinzuti from Bungalow 6, an event design and décor company that hopes to become the go-to group for GLBT weddings, to completely transform their venue to capture their dream feel. Todd describes the wedding’s aesthetic as “hipster lesbian chic with a color story of grey and yellow.” As a full-service décor company, Bungalow 6 designs all aspects of events, starting with an initial concept all the way through to the execution of the vision. 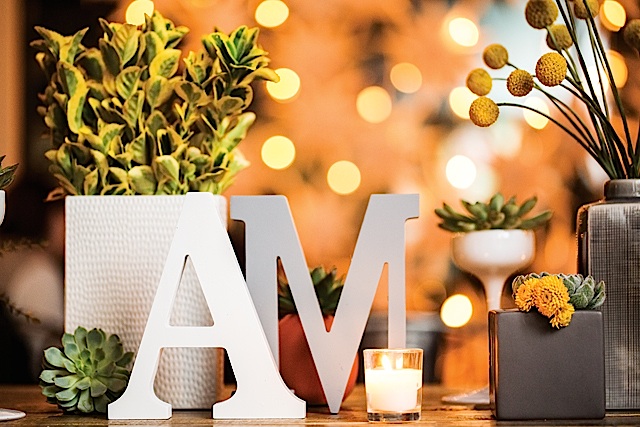 In order to create a casual, cocktail lounge atmosphere, Pinzuti and his crew removed Spill the Wine’s existing furniture and brought in new lounge furniture. They also created unique floral arrangements, table settings, and a jaw-dropping star backdrop that twinkled behind the women as they exchanged vows.

Before the women arrived, guests were invited to enjoy a cocktail hour and relax in the space. Ania remembers waiting behind the curtain and getting ready to enter the space: “Everyone knew we were there and there was an epic rush of adrenaline and excitement. Everyone was cheering for us. Walking down and seeing all the people we know in the same room was amazing.”

As a way to reflect their individual personalities, the women wrote their own vows, incorporating five statements of love and five promises to the other. The crowd went wild when Ania said, “I love you more than Starbucks,” and Molly countered with, “I love you more than bacon.” Through laughter and heartfelt sentiments, the two professed their love and were married.

Two very special moments stood out for Ania, whose family was not able to travel from Poland for the event. Ania’s sister virtually attended the wedding via Skype, and Ania was extremely moved by the surprise. Additionally, Molly’s nephew walked Ania down the aisle, a moment that truly depicted the blending of their families. 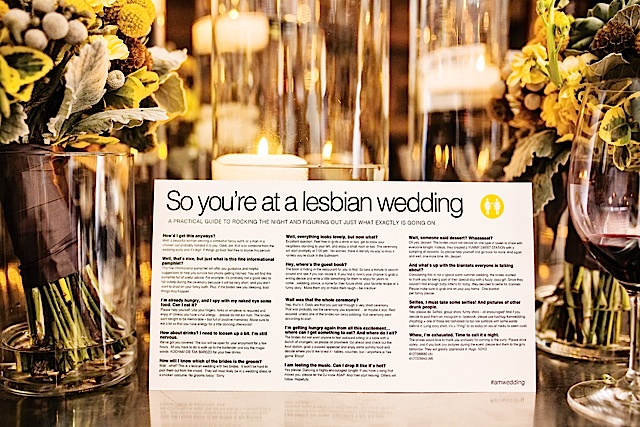 The couple turned to the skills and talents of their friends to plan their wedding in less than six months. Molly’s nieces sang a song during the ceremony, and Regina, a mutual friend, got ordained in order to preside over the wedding. Molly and Ania were also able to enjoy stepping out from behind their cameras and be the center of attention, and they entrusted their photography to Jamie Stoia, a lifestyle photographer and close friend.

Molly and Ania also incorporated several personal touches into their event. They planned a personalized menu with the help of Barbara DeVos, former manager at Spill the Wine. Ania created a signature martini with pear vodka and dry ice. The women also honored their grandmothers’ memories through toasts with their grandmothers’ favorite drinks—Molly sipped Pepsi while Ania slammed vodka.

Molly, Ania, and their guests danced the night away, and Molly says she had so much fun that she would get married again in a heartbeat. She adds, “It felt like a reception the whole time!” One additional element that added to the party feel was a choreographed flash mob, performed by the bridal party, serving staff, and a few brave guests. As the night drew to a close, guests were invited to take home a cozy blanket for some much needed relaxation time.

Looking to the future, Molly and Ania are excited to spend the rest of their lives in laughter and joy together. The women plan to have children and continue traveling, both around the world and around Eden Prairie on their scooters. Whatever the future brings, they know that their love will keep them going. But one thing is for sure: they will always end their night by saying “goodnight” in Polish, a special tradition that reminds them of the magic that happens when two women who were born thousands of miles apart find their home in the arms of each other. 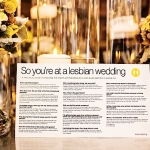 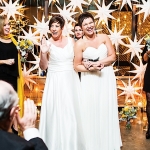 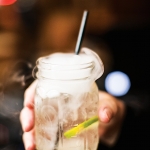 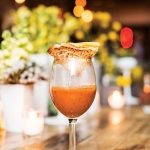 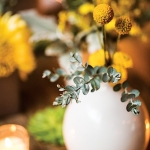 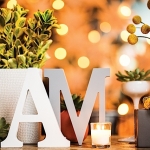 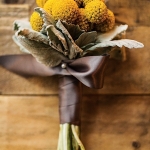 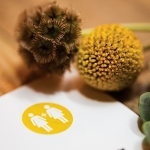 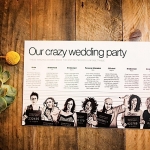 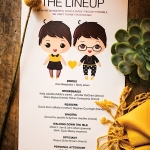 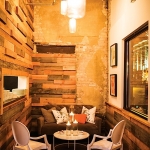 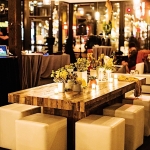 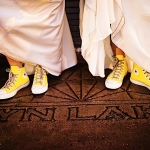 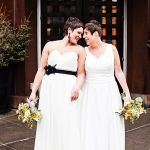