Lavender spoke with Lenius about this stellar achievement. 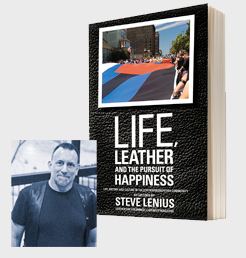 How did you come to the Leather Life?

Having been attracted to and scared of leather for years, in 1993, I decided to investigate. By 1994, I was competing in the International Mr. Drummer Contest in San Francisco, then began writing “Leather Life” for Lavender. Your humble columnist, now your humble author.

Do you have a favorite theme?

I’ve always tried to write about something no one else is writing about, or something everyone else is writing about, but in a unique way—like former Senator Larry Craig’s run-in at the Minneapolis Airport’s men’s room. The spin I put on it was: “Of course I believe you’re innocent. But now that you’ve had a taste of society’s homophobia, why don’t you use your position in the Senate to do something about it?”

Does “Your Humble Columnist” come from your “preacher’s kid” background, or are you naturally modest?

I’m not naturally modest. For years, I would alternate between feeling I was the greatest and the worst person who ever lived—feelings my upbringing as a “preacher’s kid” probably intensified. I’ve had to learn humility, and I’m still learning. Part of the “your humble columnist” moniker is a reminder to me of how I want my writing—and myself—to be perceived. As long as I keep in mind that the community is the hero—not me—I can write what needs to be written without my ego getting in the way.

Bootblacks are the leather community’s unsung heroes. On one level, they’re just putting polish on boots, but for a bootblack and his or her customers, it’s anything but drudgery. Bootblacks care deeply, and take pride in elevating boot polishing to a science, a craft, an art, and a service. And then, there’s the sensuality of having someone polish your boots, or polishing someone’s boots for them. For many, it becomes its own “scene.”

The dynamic in Master/slave relationships?

I mention the Master/slave relationship several times, but I think the best shorthand for it is in the “What’s your LPT (Leather Personality Type)?” column. People assume a Master is a confident, competent, and capable person, and they often assume slaves are weak and/or ineffectual. In reality, a slave can be as strong and confident as the Master they serve—they just express their strength in a different way.

You mentioned having been in an abusive relationship. What would you tell others who are in one?

Just to be clear, I was in an abusive relationship before I got into leather. No one deserves to be abused. There are support resources available, and I would encourage an abused person to reach out for help. I’m grateful for everyone who helped me get out of my abusive situation. One possible advantage for someone in the leather community is that other community members tend to have a pretty good understanding of the difference between healthy and unhealthy kinds of power exchange in relationships, and if they see abusive behavior, they’re more likely to say something about it.

I’d say: “Tyler McCormack is a trans man who uses a wheelchair.” He is also the current International Mr. Leather, which is great. But it’s not great because he’s trans or because he uses a wheelchair. It’s great because the judges decided Tyler was the best man among this year’s contestants to be the community’s standard-bearer. During the contest, his speech got by far the biggest ovation of the evening, so he didn’t just win the judges over—he won the crowd, too. I think he’ll have a great year, and I think there will be a lot of education and consciousness-raising.

Comment on the “community” aspect of the Leather community. You’ve really assigned them full tribal status, with customs, a banner, oral and written histories. Outsiders may just think, “Gang.”

People who see leather, and think, “gang,” are still under the influence of Brando in The Wild One. Sometimes, it’s fun to be perceived as intimidating when I’m wearing my leather, but I think it’s more fun to show people that I’m not that different from them. As I say in the book, we all have the same basic needs and wants. Some of us simply have more colorful ways of expressing them. In the case of the leather/BDSM/fetish community, we express ourselves, our tribe, and our culture through our apparel, our leather pride flag, our history as preserved at the Leather Archives & Museum in Chicago, our events and gatherings. It’s a colorful and fascinating community, which made it easy to capture in what I hope is a colorful and fascinating book.

Tell us a bit about how the book was conceived and designed—it’s really your baby!

I didn’t want to just take a bunch of columns, and publish them, so I arranged these pieces, written over 15 years, to present a coherent picture of contemporary leather/BDSM/fetish life. I wanted to paint an enduring portrait for members and members-to-be—a book to present the leather community in the best light, produced to the highest standards. Our community deserves to have its literature presented professionally. I’ve spent over 35 years as a typographer and graphic designer, involved in the production of other authors’ books, and thought it was time I used those skills on a book of my own.

Life, Leather and the Pursuit of Happiness: Life, History and Culture in the Leather/BDSM/Fetish Community
Steve Lenius
Nelson Borhek Press
$21.95