Kathy With the Good Hair

As the center of controversy and someone unafraid to cross the line, say what you will about Kathy Griffin, but she’s also in a league of her own.

She’s half an EGOT, for goodness sake! She has two Emmy awards, and she’s one of the only three female comedians to have won a Grammy for Best Comedy Album, an honor shared by Lily Tomlin and Whoopi Goldberg. Her 23 comedy standup TV specials earned her a mention in the Guinness Book of Records. In sum, she’s a bigger deal than you may think. She had three lines in Pulp Fiction, starred in Eminem’s video “The Real Slim Shady,” and, of course, in two episodes of Seinfeld (“That’s how the straight guys know me,” she says), in addition to her hit reality-TV show, My Life on the D List.

In her latest standup tour, Like a Boss, Griffin pokes fun at a new generation of celebrities, without neglecting her favorite material, such as her own alcoholic mom. There’s just no holding back with Griffin, who’s stepping up as the spiritual heiress of her departed friend and mentor, Joan Rivers. Like Rivers, Griffin is determined to keep PC culture at bay, and nobody is safe. 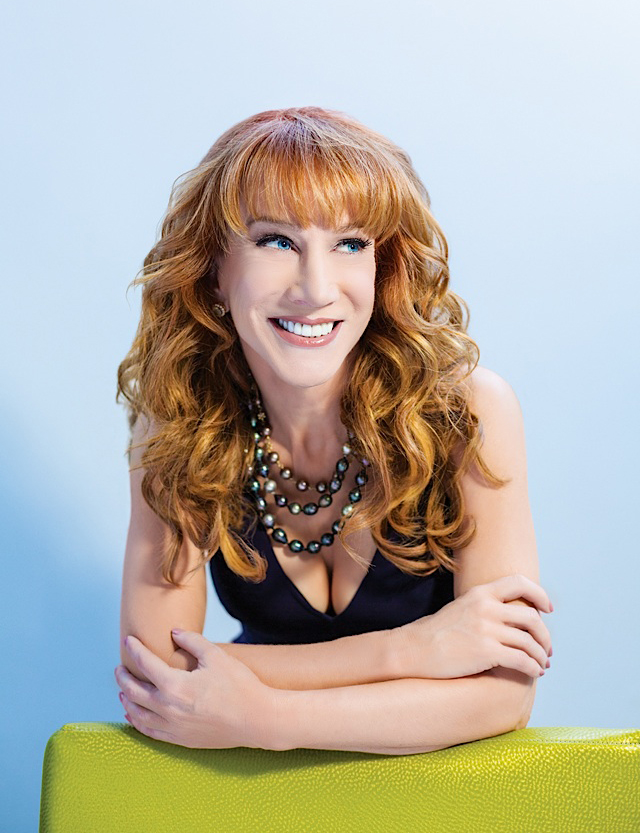 Not even me. Before we even speak, Griffin finds me on Twitter to let me know she’s looking forward to our interview. The woman certainly does her research, at one point even mentioning, “I’m reading your Twitter and you have the cutest dog.” (She’s not wrong.) But before we even began talking, she builds on the repartee we started when we spoke before her last appearance in Minnesota. She immediately shows me that she has familiarized herself with me and began our conversation by catering exactly to the kind of information I would want to know.

“I have some news for you, Shane,” she said with a wink in her voice. “And you should know this is breaking news, but I’m giving it to you exclusively. Since we’ve spoken last, I can now reveal I’m Becky with the good hair.”

All jokes aside, Griffin promises all new material for her Pride kick-off appearance at Orchestra Hall. “I’m doing 80 shows this year alone,” she says. “That’s 80 cities. I fly more than a pilot. And I love doing new material. And I can’t even avoid doing new material; let me tell you why. I just recently had run-ins with everyone from Leonardo DiCaprio and I was with Lily Tomlin (who played Orchestra Hall last year for Pride, so she can vouch for me) and I’ve seen Kris Jenner recently.”

This is the point in the conversation where Griffin takes an uncharacteristically long pause. The term “Chatty Kathy” may well have been coined in her honor, so getting silence from her is a bit unnerving.

She continues, “Let’s cut the shit, I’ve been immersed in the community since you people were merely called gay. Now that you’re LGBTQIA2 (345Caitlyn), even I have to admit, Kris has had a rough year, like, give it up. Come on. She’s had to act like Lamar overdosing in a whore house and then coming back onto their private jet is like a fun thing. I personally would be like, ‘I’m sorry Lamar, you can’t come on the private jet yet, you have to kind of work your way back into the family.’ So, I mean, I can guarantee it’s new material, because if you’ve ever seen me, I’m just talking shit about the Kardashians for two hours solid and now I actually have some empathy for Kris Jenner. Which I never thought I would say.”

Aside from (maybe) going easy on Kris Jenner this time around, she will also be bringing a Cher story (this is Pride, after all), and Griffin won’t hold back with regard to behind-the-scenes stories with Anderson Cooper. Of course, the ever-political Griffin promises that the presidential election will get discussed at Orchestra Hall, calling it the “biggest Punk’d Ashton Kutcher prank on the country in its history.”

“And you know what? If I have to use humor, then I will use humor,” she says, citing her funny bone as her political tactic. “But I’m really excited to stand on the stage at Orchestra Hall and be inappropriate. Because, you know, I love playing Minneapolis, and I’m a Midwestern gal from Chicago myself so I get the sensibility, I get it. I get the whole vibe there. And I’m gonna crack the whip on you LGBTs because god only knows what party you will have come from and what party you’re dressed for, but dammit, for two hours you’re going to sit prim and proper in Orchestra Hall and listen to my dick jokes.”

Let there be no doubt about it, Griffin will be talking about whatever pops into her head or is in headlines that day. Just during our conversation alone, she made fun of Anderson Cooper for admitting he likes Nick Jonas on New Year’s Eve, Nick Jonas for not knowing who The Monkees were when she met him, and Ryan Seacrest (always Ryan Seacrest).

“I am going to be talking about whatever is on top of my mind,” she reassured me. “And also, who knows, what has been happening in the community? I’ll be on stage at 8 p.m., and I’ll be checking my iPad or phone just up until 5 to 8 to see what is going on locally. Every show is different. Minneapolis is always a hotbed of activity for politics and LGBT rights.” 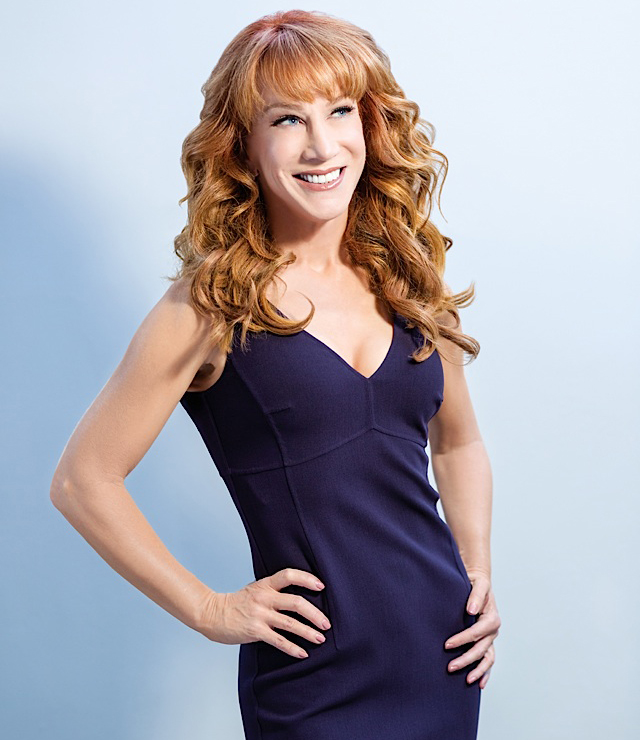 In discussing what to expect at her show, there inevitably comes a time when Griffin does research and flips the script. Without warning, Griffin suddenly becomes the interviewer to gain fodder for her performance. Out of nowhere, Griffin stops mid-sentence before saying, “Let me ask you this: do gay boys want Brad Pitt any more or is he too old now?”

As I fill her in on how there is a crowd of younger gay men who enjoy the older crowd, she responds with a laugh, “You are vicious! All right, so tell me who you want now. I’m actually writing this down for my show.” Not expecting the question, I get visibly flustered, which spawns a conversation on her inability to control what comes out of her mouth and remaining politically correct.

“I just feel really strongly that comedians are in a way the last bastion of people that need to be politically incorrect. If you were to give me an assignment that said: ‘OK, you have to do two hours of material and everything has to be politically correct,’ I would have to leave,” she says. “I was actually able to meet Prince Charles one time, and I was nervous meeting him of course, and my friend introduced us. She said, ‘This is Kathy Griffin, she’s an American comedian and she’s very outrageous,’ and Prince Charles pulled me in and he said, ‘Well who would keep us honest if it weren’t for newspeople and comedians?’ I was like, that’s right! I’m gonna try to do that because the Prince of Wales told me.”

Her ability to say whatever she wants while remaining charming is certainly her trademark. Now, if she could find a way to bottle that, she would be well on her way to accomplishing her goal of becoming a brand. Whether the idea came from Kim Kardashian or her conversations with Adweek, Griffin has been vocal as of late about becoming a brand as her next career move.

“I’m so tired of being a human,” she says without batting an eye. “I want to be a brand or an emoji. Or an app. I think if you’re an app, you’re actually making more money than a human. I talk to my comedy friends who are like, ‘Fuck your two Emmys and Grammy, what are you doing going town to town with your dick jokes? You should just be an app.’ And I can’t help it. I love it. Because nothing, nothing can replicate the live experience. Especially during Pride at Orchestra Hall. Like, come on, that’s as good as it gets.”

Pride. The event that Griffin was born to play. And, being Pride, Griffin says she is going to “gay it up.” As a guarantee, Griffin says audience members will laugh until they’re choking a little bit because everything she’s said is very inappropriate.

“I’m going to say things I can’t even say on HBO or Netflix,” she promises. “The live shows, I’m getting a little bit worse. I just want to say, as I get older, like, give me a dollar and I still won’t buy a fuck. I’m having more fun, because I give less of a fuck.”