Police Chief To Make It Legal 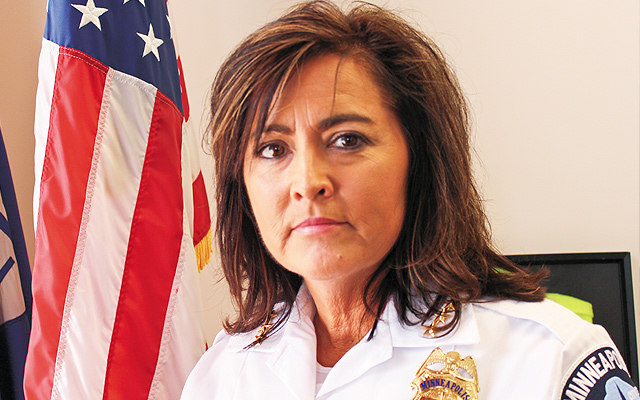 In March of 2012, the City of Minneapolis made history by swearing Janeé Harteau into office. Janeé is the first female police chief in our city and the first openly lesbian police chief in the country.  When you add those distinctions to her French Canadian and Cherokee ancestry, Harteau is prompted to joke, “I’m a melting pot within myself.”

Janeé was a high-achieving, first-born child in a family of daughters.  Most of her childhood years were spent in Duluth, Minnesota.  She aspired to be a singer, her father was a musician, and she began playing guitar at the age of five.  “When I was growing up, little girls didn’t even think about becoming a police officer,” Harteau recalls.  In high school, she became the lead singer in a band that played hits from the 1940s and toured all over northern Minnesota.

Her mother didn’t think there was much job security in being a singer. Janeé was steered to school to become a medical secretary, where she was bored. “It was really because I wanted to do something that made a difference, and some guys that I had gone to high school with were going to be cops. I didn’t know that was an option for me, but I found out that it was,” Harteau recalls.

Harteau completed law enforcement school in Hibbing and took a job with the Minneapolis Police department in 1987. She was drawn to the diversity and anonymity of a larger city. Harteau was twenty-two years old, “I tried to not be different you know, there were some organizations that formed for women in law enforcement, I never participated in that. I didn’t want to show any separation. I wasn’t trying to be one of the guys, I was just trying to be a chameleon in blue.”

She was proving to be an outstanding officer, and cites her communication and listening skills as reasons for her success. “I try not to be judgmental, I think it is important because a lot of people are in embarrassing situations and they didn’t want to call the police. You are often dealing with people at very low points in their life and so I remember that this could be me. I never feel like I am above any situation.”

Her career was going well. The chameleon approach was working, but then something happened that took her by surprise. She fell in love with fellow officer and friend, Holly Keegel. “It was a surprise for both of us and that’s why we kept it private. It was a struggle, we had to be strong as a couple before we could have that conversation with other people, so it was hard, we had to go through accepting it ourselves. But I also think that’s what makes our relationship so powerful, because in those early years we only had each other. It was a long 5 years.”

They were assigned to work together, and that is when the trouble started. They were partners on the street and at home, and nobody knew it.  The problem was not with the whole department, just a few individuals. Harteau recalls that they didn’t know if the problems stemmed from “rumors or jealousy or the fact that people would ask us out on dates and we wouldn’t oblige.” It was increasingly becoming an unsafe work environment.

Things grew more difficult. They weren’t getting backup, people interfered with their radio transmissions, and things were planted in their vehicle.  They went to a supervisor, who made a comment about their complaint being worth $100,000 dollars.  They weren’t motivated by money, they simply wanted to do their jobs in peace.  Eventually they felt forced to take their case to the Equal Employment Opportunity Commission (EEOC), a state level human rights agency. It was a dark time. Some witnesses to events were not forthright when it came time to speak to internal affairs. However, there was enough evidence for the EEOC to find in their favor. Harteau seems to speak from her heart when she states, “I worked too hard to get where I was to have somebody try to undo that because they didn’t like me, because I didn’t date them, because I was with Holly, whatever it was. It didn’t matter, it interfered with my ability to do my job.”

Harteau considered leaving the police force, but things grew better after they were both transferred to a different department.  “I was with a good group of people and it didn’t matter a thing about me. They were just good cops who wanted to do their job, and I had a great supervisor and it was like starting all over. Holly and I never looked at it as we have a problem with the whole department or policing in general. We had issues with these individuals,” recalls Harteau.

Their victory led to internal changes within the department. Although it was horrible at the time, Harteau feels the bumpy road contributed to her success, “I wouldn’t be sitting in the chief’s chair now. I would have just enjoyed being a cop. You have to have those struggles so you get stronger and stronger, and then you can help other people.”

In terms of the department, Harteau is quick to add, “We are so vastly different today because we are hiring diversity, because there are more men and women who think differently, and we are a more educated department; we require degrees to be police officers. The right people with the right amount of education lead to open minds, and let’s face it, what job is more about people and empathy than being a police officer?”

Harteau loves the job thus far. She knew what she was getting into because of her close proximity to former Chief Dolan.  She feels frustrated because sometimes there are things that she is unable to legally talk about, such as open investigations.  She also has become visible in a whole new way, Harteau shares, “It doesn’t matter where I am or whether I have a uniform on or not, I’m very recognizable. I didn’t expect that, I feel like I can’t go to the grocery store in my pajamas. I definitely feel like I represent the city all the time and I always have to be on my A game.”

She also attributes her success to her strong family bonds.  Holly Keegle remains her soulmate and partner, they have a 14-year-old daughter.  After marriage equality passed in Minnesota, people in Janeé and Holly’s lives, including their daughter, began asking if they were going to get married.  The answer is YES!  “I felt married for 24 years and so now I’m going to have the paper to prove it,” Harteau says with a smile.