It’s a Furry Affair: How I went from Being a Foe of Felines to being a Cat Fanatic 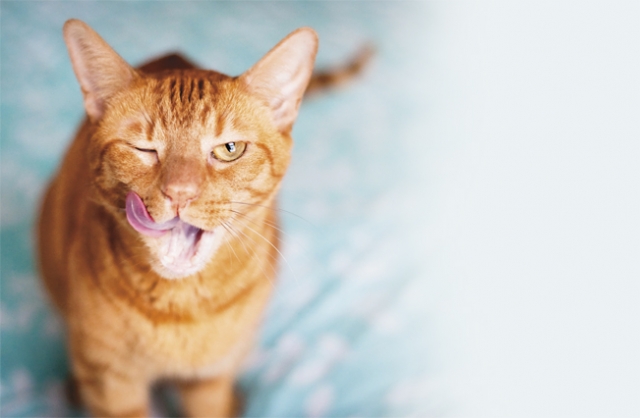 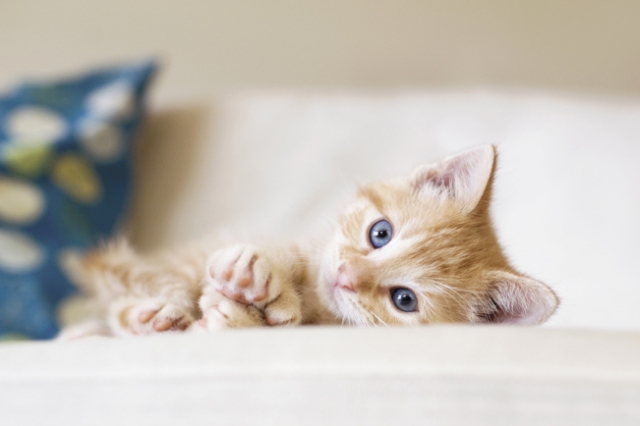 He’s waiting for me when I stumble in the door after a long day of work, green eyes flickering as I cross the threshold into my humble abode. As I drop my things and head down to my basement lair, he sprints ahead, anticipating our daily ritual. He beats me to my bed and leaps in. I flop down beside him and whisper for him to come closer. He snuggles into the crook of my arm, my hand slowly rubbing his cotton-soft belly. I feel him purr and his eyes close—perfection. As I’m dozing off, I feel a tiny paw reach around my arm and start to softly pet me. That’s when I know. I’m in love.

I grew up in a household where the only thing worse than cats was the devil. With an extremely allergic mother and a father who was less than enthusiastic about any pets at all, I grew up without a furry friend to keep me company. My mother’s opinions wore off on me: “Cats are filthy. Sneaky. Evil.” I would avoid houses of friends who owned cats, and I continued my unjustified hatred of felines until well into my college years. So, when my new roommate told me she’d be bringing her cat Lucas, I was less than thrilled. But what started out as a terrifying trial has turned into a beautiful friendship between Lucas and me. We’ve become each other’s companions.

Lucas spent his first day cowering under the couch, terrified of anything that moved. I enjoyed his absence, assured that I could co-exist peacefully with this creature as long as I never had to see him. My roommate suggested that he spend the night in the utility room adjacent to my room so he could get used to where his litterbox and food were, and I agreed in an attempt to avoid waking up to a cat sitting on my face and trying to suffocate me (yet another horror story my mother used to terrify me). Though he made a little noise, I quickly drifted off to sleep and assumed that Lucas did the same. 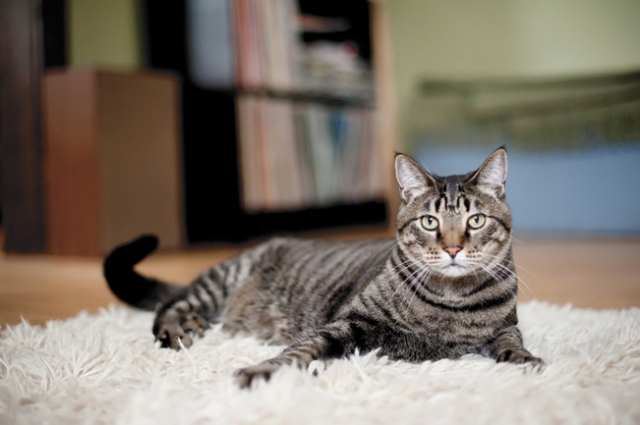 The morning came, and I opened the door to the utility room, expecting Lucas to dash out and escape his temporary holding-cell. But he didn’t appear. I searched high and low—in the cupboards, in the closets, under the laundry rack. Lucas was gone. I panicked. How had I lost someone’s cat in one day? Just when I was about to run upstairs and tell my roommate that her beloved cat vanished into thin air, I heard the most horrible howling coming from the back of the utility room. I cautiously approached, but there was no cat in sight. The howling continued until I realized that Lucas had fallen behind the dryer and become trapped.

I instantly pulled the dryer out—my whole body in rescue mode—and Lucas leaped out, his grey coat covered in several layers of dust. He immediately attached himself to my leg, covering my suit in dust bunnies and dirt. I scooped him up, relieved that this cat that I was determined to hate was alive and well. We’ve been inseparable ever since.

Since the rescue, as simple as it was, Lucas and I have been living in peaceful harmony. He demands my undivided attention and gets jealous when I pay more attention to my girlfriend. I brag about how Lucas loves me best as I rub his tummy. Lucas is slowly taking over the house, and I’m slowly becoming accustomed to the fact that I will probably never get time alone in the bathroom again. (Telling Lucas that “Mama’s having a private moment” does nothing, but I can’t bear to completely lock him out.)

But there’s still much I don’t know about taking care of a cat. How do I know when something’s wrong? How do I accommodate Lucas’s personality without becoming a total pushover? How do I share a million photos of Lucas on Facebook without becoming a crazy cat lady? All joking aside, owning a cat for the first time is definitely a learning experience filled with joy and tension, but there are many resources that provide great advice on what to expect when bringing home a cat for the first time. 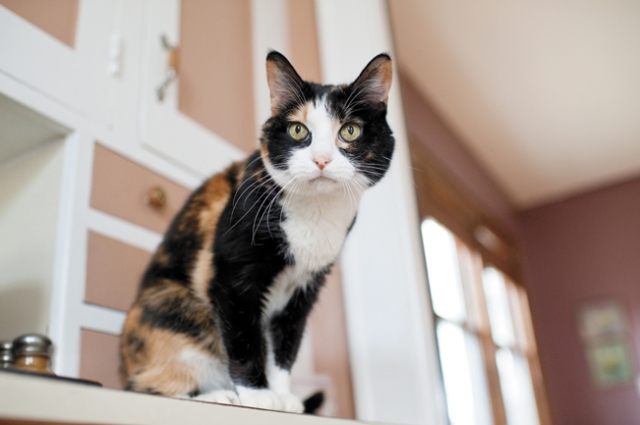 Dr. Heidi Blackburn and Dr. Leslie Goldblatt, veterinarians at Golden Valley and Greenbrier Animal Hospitals, offer great advice for first-time cat owners. Dr. Blackburn believes it’s important to know that “cats have distinctive individual personalities…some are very affectionate, others are not. Unlike dogs, their goal in life is not to please the owner but more to please themselves! Having said that, they can be extremely fun, playful, interactive, and entertaining! Keep your mind open to learning about your cat’s personality rather than having a preconceived idea of exactly what you want your cat to be.”

For busy people who still want a furry companion, getting a cat is a better choice than getting a dog that would require being let outside and being walked. Dr. Blackburn notes, however, that “if you are gone frequently for long hours, it would be nice for your cat to live with another cat with which it gets along nicely.” Though cats are more independent than dogs, they still require attention and affection, so owners should make sure that they are not simply dismissing their feline friends.

Before you get a cat, make sure that you’re ready to be a responsible pet owner. Purchase litter boxes (Dr. Blackburn notes, “There is a general rule of thumb as far as how many litter boxes should be in the home with cats: it’s one litter box per cat plus one) and other supplies before the cat comes home. Be aware that the cat will most likely be very timid at first and want to hide. Christina Rubio, a veterinary technician, recommends “keeping your cat in a quiet room, away from other furry members of the household for at least the first few days. This will allow your cat to not only adjust to you but to your home. Once your cat has become adjusted to the room give it a little more freedom, slowly let it meet the other members of the household, introduce toys, etc. A slow adjustment is always best.”

One important aspect of owning a cat is accommodating the cat’s personality. If your personality conflicts with the personality of your cat, Dr. Goldblatt suggests a tactic used to solve disputes between humans: compromise. “Try to find common ground. If your cat is very rambunctious and you prefer a quieter pet, find some form of play that your cat enjoys that tires him out. Set regular play times that will hopefully be followed by quiet lap time.” 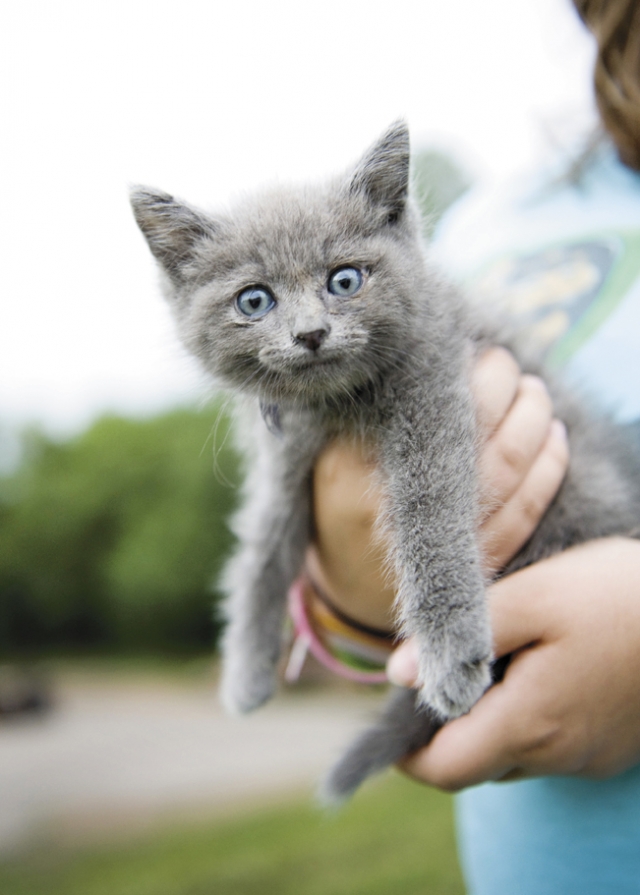 Stacy, another veterinary technician, notes that “most cats are very independent; they like attention on their own terms, and it may be only for a short time.” She suggests that you “get to know what your cat likes and doesn’t like and respect that.” Dr. Blackburn adds, “In the rare case where a new cat and owner cannot meet halfway and accept or enjoy each other for what they are, it is the owner’s responsibility to find an excellent new home for the cat.”

Owning a cat requires work and responsibility, and cleaning out a litter box is anything but glamorous, but the love and affection shared between you and your pet surpasses the annoyance of the occasional stinky surprise. I know Lucas is waiting with open paws when I return home each evening, and he knows I’m coming home to him every night. It’s better than a relationship: we silently cuddle our issues out, and we give each other space when needed. Our friendship is based on trust. He trusts me to rescue him from behind the dryer, and I trust that not only will he never sit on my face and suffocate me in my sleep, but he’ll always be an affectionate friend at the end of each day.

Are you interested in getting a new cat? Follow these helpful tips from the Veterinarians and Vet Technicians at Golden Valley and Greenbrier Animal Hospitals.

• Be aware of your cat’s usual habits and note small changes. Ask a vet if behaviors have changed.

• Play with your cat! Destructive behavior can be minimized with ten minutes of play.

• Feed your cat at meal time.

• Visit a vet at least once a year.

• Provide other “scratchable” items to prevent your cat from scratching up furniture.

• Spay or neuter your cat.

• Don’t free feed. Allowing cats to eat from unlimited food whenever they want leads to obesity and a variety of other health problems.

• Do not let your cat roam around outside unless it is micro-chipped for easy identification and vaccinated. Most cats are and should be indoor pets. With coyotes becoming more prevalent in the suburban areas of Minnesota, it’s important to keep your cat inside. Cats and smaller animals are no match for coyotes, who can be violent and can carry diseases.

• Don’t assume that your cat is “simply being a cat” if it seems unhappy or cranky. Be aware and ask a vet if something seems off.

• Don’t assume that your cat doesn’t need attention. Cats require affection, so lavish it on them! 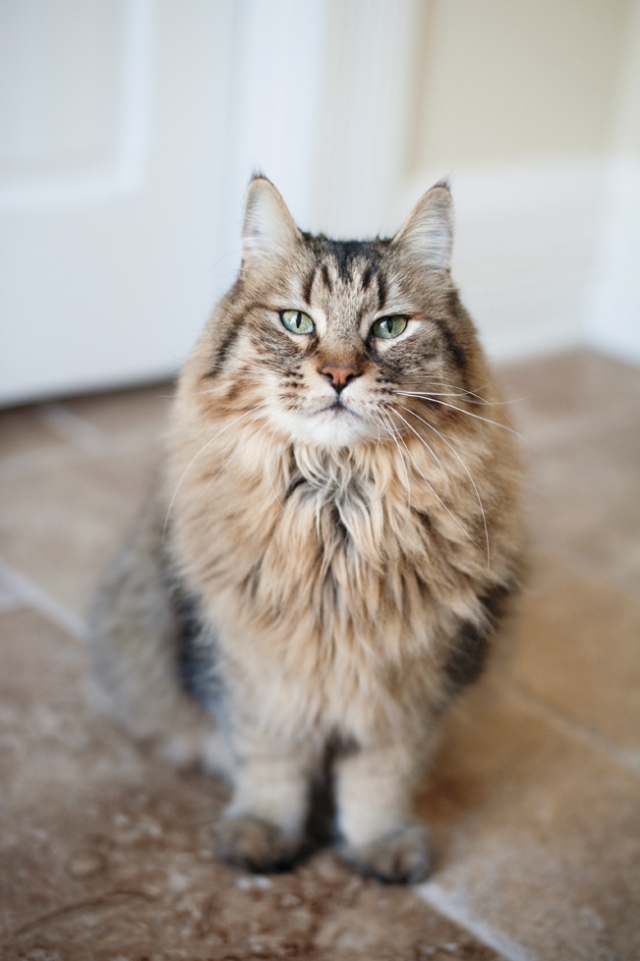