So, you won the Mr. Palm Springs Leather competition, and made it to Chicago. What are your memories of the International Mr. Leather (IML) competition? 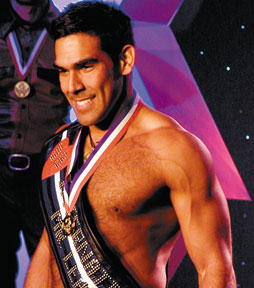 We don’t have time—I could tell you every minute of it.
Thursday night, at the contestant introduction, I saw Guy Baldwin [International Mr. Leather 1989], who is my idol. I learned so much from his books. I just had to introduce myself: “I’m Gary, Mr. Palm Springs. You’ve been my inspiration.” And he saw that I was so moved. The friend who was with him came back later, and said, “You know, you made Guy cry.”

During the contestant number-draw, I picked number 47. I went backstage, and there’s Guy Baldwin. He goes, “Um, kid, I just wanted to mention something to you that you might not know—I was number 47.” That, for me, set the record straight. I said, “I am winning this. I’m not letting down Guy, I’m not letting down myself, and I’m going for it.”

Then, when Chuck Renslow was saying my name as the winner, I couldn’t understand him—my last name is so difficult to pronounce—so it was, like, “And the new International Mr. Leather is Gary—whatever.” I just stood there. And C.J.—he’s right next to me—goes, “Bitch, you won!” I started crying.

Current leather community politics—what do you feel strongly about?

I’m concerned that the leather community has become a preachy church that nobody wants to go to anymore. Put a dollar in the box—we have to raise money for the community, for kids, for breast cancer, for AIDS—money, money, money. Where is the fun?
I want to see the leather community where it was in the beginning. People used to get together in bars. They’d socialize. Yes, they worked for the community, but they took time outside of our Friday and Saturday nights, or whenever we got together, outside that time frame, to do the social work.

But when you bring the social work to the bar, when there’s somebody selling raffles all night, and pushing, “Give me your money,” what happens? The real players, the ones who want to go out and have fun, have built an underground culture, and they don’t leave the dungeons, because they don’t want to go to a bar to keep putting money in a box.

There wasn’t a lot of that at the Mr. Iowa Leather Contest, was there?

And I loved it. How fun was that event? Who was asking for a penny? No one. Did you have fun? Everybody had fun. See the difference?

You can contribute. You can have a special night. You know, we’re working tonight to help whatever, whoever you want to help. And I’ll be the first one to strip down, and sell my jock straps to help the community. But we need to turn it down, because we’re here to have fun with each other, and I don’t want that to be lost.

If we’re going to help somebody, we want to help our own community. Let’s help a leather event to not die. Let’s help within. Once we’re strong, and we are helping each other, and we have all the structure that we need, then we can go out, and help others. I know this is going to be touchy, but it is the truth.

Yes, before I won IML. I haven’t done it for a year. And I think that’s the end of the conversation.

Did you look for it, or did somebody see you, and say, “Hey, you’d be good onscreen?”

I needed to pay my bills, and I had a boyfriend at the time who was into it, so we started doing it together. And then, the thing grew and grew and grew, and everybody started calling me.

Have there been people who have looked down on this?

Have you thought about what you’re going to do after you step down in May?

I want to stick around. I’m the first Hispanic IML, and I think I can bring a lot to the Latino community. I’m going to take a couple months off to, you know, breathe in, breathe out, and then come back.