Gary Iriza came to Chicago last May as Mr. Palm Springs Leather and left as International Mr. Leather (IML) 2008. He’s Latin, he’s passionate, he’s energetic—and he has a great sense of humor. I interviewed him when he visited Des Moines, Iowa, February 13-15 to judge the Mr. Iowa Leather Contest. 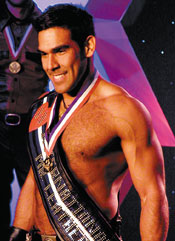 What has your year been like so far?
Working, traveling, meeting new people everywhere. At times, it becomes a blur. When I was flying here, the lady at LAX asked me, “Where are you going?” For two seconds, I just glazed, then answered, “Um, Iowa.” She asked, “What city?” I answered, “Uh, you got me on that one.” But once you get there, and get to know the people, there’s something particular in each city that makes you remember them.

You grew up in Venezuela?
Yeah, in Caracas, Venezuela.

Fancy part of town? Not-so-fancy part of town?
I’m from a family where everybody is a professional. We were not wealthy, but we all went to school, so we can consider ourselves middle-class. However, there’s a fine line between what’s considered middle-class in a country like Venezuela. Either you have too much money, or you have no money at all. It’s a poor country. I mean, it’s a rich country, but there are a lot of poor families.

You studied what?
Systems engineering.

Computer systems?
I was more in the hardware part than the software. I never liked it, to be honest with you. I wanted to be a medical doctor.

What’s it like for gay people in Venezuela, in Caracas?
It’s not easy. There’s a lot of persecution, especially from police. One time, as I was leaving a gay bar, two police officers stopped me. They asked me, “Where were you?” I said, “In a bar.” They said, “Are you gay?” I said, “Yes.” They said, “We have to search you.” They handcuffed me on a light pole for, like, a half-hour. There’s stuff that people don’t know about that’s going on in Latin America.

So, you got to this country, and where did you first land?
Miami, and I loved it. I was learning the culture, and I actually made an effort to learn the language—even though I was in South Beach, and everybody speaks Spanish. I had a rule: Whoever’s going to speak with me, you want to speak in English, because I don’t want to procrastinate my learning.

You live in Los Angeles now?
I was in LA for three years, and then moved to Palm Springs.

And that’s when you won Mr. Palm Springs Leather?
Yeah, that’s when I competed in Mr. Barracks, Mr. Palm Springs, and then IML. Then, I met somebody in San Francisco, I married him, and lived there for two months. It didn’t work out, and I’m back in LA.

Anything more you want to say about that?
Getting married—it was a beautiful thing to do, but it just didn’t work out. Probably, it was too soon for us to jump into that, but we were under the pressure of the American elections and Prop 8. I wanted to represent the community, and say, “I’m in love with somebody,” and I think we wanted to marry because we wanted to support the cause. The only advice I will give anyone is, when you do something, you have to mean it. I did mean it—it just didn’t work out for us. But he’s an extraordinary person, he was Mr. San Francisco Leather 2004, he’s an incredibly handsome man, and he always will be in my heart.

How did you get into leather?
When I was in Miami, I went to a couple of parties and saw leather guys, and I thought they were attractive. When I got to LA, I was very attracted to the Fault Line bar on Melrose. I met my ex-partner, James, at a leather bar in Palm Springs. He is very much into leather, and he took me under his wing, and little by little, he turned me into his boy. And I liked it, I liked it, I liked it!

I had asked him to take me to IML—he had been going to IML every year until he met me, right? And he was, like, “Oh, no, you’re not ready for it.” I told him, “You know what? You don’t take me to IML. I’ll take you to IML.” And he laughed, “Yeah, right, you don’t have the money—you don’t have the means.” So, I remember, right after I won Mr. Palm Springs, he jumped onto the stage, and gave me a hug. He was, like, “Oh, my God, I love you so much.” And I said, “Pack your bags. We’re going to IML!”

To be continued next issue. Until then, check out Iriza’s blog at imlgary.blogspot.com.