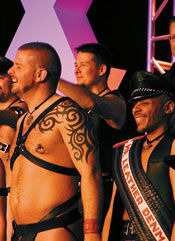 2,019 Number of rooms in the Chicago Hyatt Regency Hotel. Setting a record, IML filled them all.

51 Number of contestants this year.

23 Number of states represented by contestants. (Minnesota, alas, was not among them.)

30 Number of years it took to have a contestant in a wheelchair roll across the IML stage: Contestant Number 33, Richard Hubley, Mr. Leather Ottawa 2008.

400 Approximate number of audience members for the first IML Contest in 1979.

12 Number of contestants in the first IML contest in 1979.

11 Number of contestants from outside the United States (four from Canada, three from Germany, two from the United Kingdom, and one each from Denmark and Sweden). That was more than 20 percent of the contestants, so IML truly can claim to be an international event. 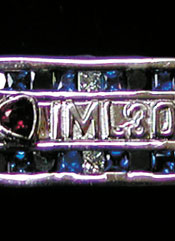 70,000 Square feet of space occupied by the Leather Market.

125 Number of vendors in the Leather Market.

11 IML titleholders from past years on hand for this year’s festivities—including outgoing IML 2007, Mikel Gerle (right).

160 Length in feet of the Hyatt Regency’s bar known as Big, centerpiece of what was, for the weekend anyway, the largest leather bar in the universe. (It’s the longest freestanding bar in North America. And trust me, the bar really is there behind all those people.)