I Never Thought I’d See the Day: Three couples reflect on their upcoming weddings…after a lifetime together. 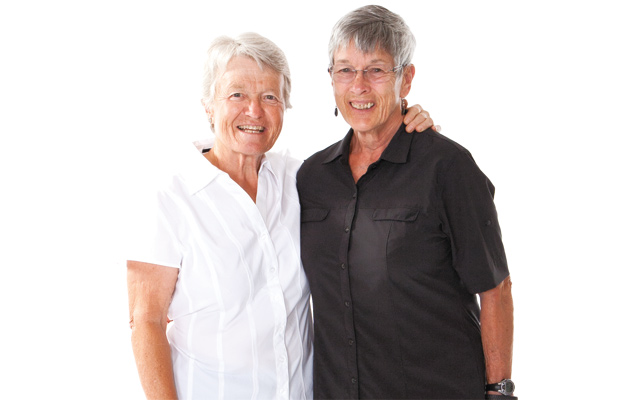 Judy Winiecki and LaVerle McAdams met on the Iron Range of Minnesota in 1969.  Ironically, it was LaVerle’s then-partner who introduced them.  A year later, they began seeing each other. Judy was twenty-two, LaVerle ten years older. LaVerle explains, “It is hard to understand, it just works. It’s like the Ann Reed song, ‘you don’t find love, love finds you.’ ” Judy laughs, “I’m 67 and LaVerle is 77 and we always joked that we would get married when it was federally legal, never thinking that we’d have to plan that wedding.”  The wedding is set for this September 22nd.  LaVerle chimes in, “It’s wonderful.”

In contrast, things weren’t so wonderful in 1970.  Judy was a public school teacher in Tower, Minnesota and LaVerle, a counselor at a junior college in Virginia, Minnesota. They knew that they would lose their jobs if their relationship were to be discovered. They could only be “out” as a couple to close friends.

That same year, Judy took a job in a school in Richfield and moved to the Twin Cities.  By 1973, they had both migrated to the larger and more anonymous metropolitan area. They remained very closeted.

Forty-three years later, they are stunned by the changes that they’ve witnessed. For example, on the first two houses that they purchased they could not take out a mortgage together. One in the couple would buy the house, then execute a quick claim deed and sell to the other. This was the only way that they could own jointly.  LaVerle adds, “It took a while before we bought the cars jointly. The last place we bought a car nobody blinked, nothing. I never thought so much change would happen in my lifetime.”

Despite the challenges, the couple feels very lucky to have found each other. They both say that the relationship has never been difficult.  LaVerle explains, “It’s just that different people have different styles, different ways of doing things, but we get along.” Judy adds, “We’re both retired now, I never felt the relationship was hard, but it’s really nice in retirement.  Not having a job as a third member of the family.”  They have lots of separate time, and individual time with friends, and LaVerle values her alone time. “Have fun, if it’s hard, it’s probably not worth it,” advises LaVerle.

As for that unexpected wedding, they are planning an afternoon ceremony at their condo in the Cream of Wheat Building in Northeast Minneapolis. A close friend will officiate. LaVerle’s ninety-six year old mother will give her away. “I’m an only child, my father died when I was four, my mother and I have been very close. She now will have a daughter-in-law, but I’m still her favorite daughter.” LaVerle jokes, and goes on to explain that her mother has not always completely understood their relationship. “She always wants to know which of us is the man and which is the woman.  We just say, ‘Mom we are just partners.’ ”

Judy comes from a large family with seven brothers and sisters.  They will have many family members and friends on hand for the gathering. Now that the invitations are out and the catering ordered, they are both getting a little nervous. LaVerel says, “I have to admit a bit of a clutch at times, but it’s what I want. It’s marvelous and it’s also surreal. Neither of us has ever been married before.” 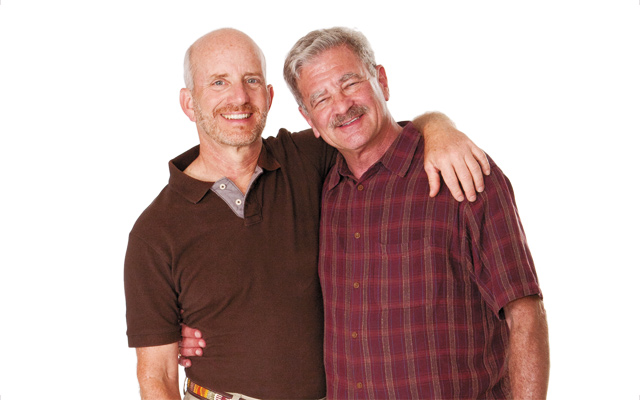 When Phil Oxman and Harvey Zuckman first met, the year was 1975. Gerald Ford was the President, Jaws and The Rocky Horror Picture Show were the top grossing films, and the number one billboard hit was the Captain & Tennille’s Love Will Keep Us Together. They met at Sutton’s Place, a gay bar located where the Target Center is today. They still have an ashtray from the bar as a memento.

Harvey was 24 and had recently, unintentionally, come out to his mother through an uncle. Phil was just a few years older. Friends had been encouraging them to meet. Phil recalls, “We felt a strong pull towards one another immediately, we are both Jewish and I feel that that had something to do with it.”   Whatever the magnet was, it was deep, because 38 years later, love has kept them together.

When asked about the success of their relationship, Phil responds that it takes a lot of work. He credits his profession as a psychologist where he has been trained in communication skills, but he is quick to add, “We both must work at it and it has grown easier over the years. The trick is that we accept ourselves more easily now, and work at not putting expectations on each other.”  He also cites their friends and family as relationship anchors. “Harvey’s family was very open from the very beginning and they lived here in the Twin Cities, so we had a place for spending family time and holidays.”

Like many long-term couples, Harvey and Phil have invested both time and money in legal documents to protect and preserve what they have together. Harvey is the owner of FirstTech, a local Apple retailer, and Phil works as a psychologist.  Prior to recent passage of marriage equality laws, they had no legal remedy to avoid paying inheritance taxes on the estate of the surviving partner. Married spouses do not pay these taxes. This was the central issue in the recent ruling at the Supreme Court.
Harvey and Phil are planning a wedding for next May, however, they will become legally married on August 1st.  Phil states, “We’ve waited too long already.” They also plan to sit down with their attorney and evaluate how their upcoming marriage will impact their current documents.  When traveling, they will continue to carry copies of their medical directives. Phil is still thinking about scenarios where the documents might be necessary, for example, if they are traveling in Oklahoma.

But despite the obstacles that remain regarding marriage equality, Phil is elated, “I never thought this would happen in my lifetime! My head is still spinning, it happened so fast!”

They will marry in May, because it is beautiful in Minnesota then, and all of their friends and relatives can be there. The wedding will be at their synagogue, Shir Tikvah.  Phil is both nervous and excited.  The reception will include the Hora, or chair dance, where guests lift the couple above the crowd on chairs, and friends and family dance around in circles. 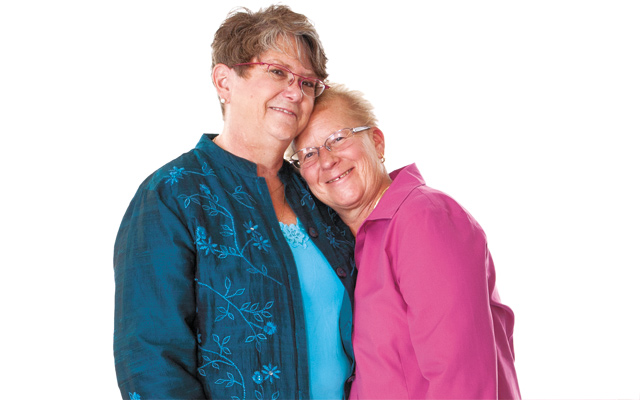 Connie Nyman and Joann Usher plan to celebrate 22-years together by getting married.  In fact, they are preparing for two family weddings. In August their daughter and her partner will come from Arizona to obtain a marriage license and have a Minnesota wedding.  Their own wedding will come next July.

Connie and Joann’s initial coming together would fit under the “it’s complicated” heading.  They had worked together for a number of years at United Seminary. Joann was married to a man and had two children; Connie was in a relationship with a woman.  “It’s just one of those things that when it happened, it was clearly where we both were meant to be. We couldn’t not be in a relationship,” Joann explains.

Now twenty-two years later, they are both in their mid-sixties. Joann serves as the executive director at the Rainbow Health Initiative and Connie works as a financial manager at a large foundation. They have done all the advised steps for legal security such as health care directives and detailed wills, but Connie’s retirement plan specifically states that only a spouse can be a beneficiary.  “My family asks how we feel about the recent changes in the law. There are a lot of different emotions involved.  It’s really exciting that we can finally get married and I can legally be the beneficiary of Connie’s retirement plan. But there’s also a piece that’s just very sad, that we had to wait so long just to have the same rights as the rest of our family.”

Because of their involvement with organizations working for marriage equality, the couple had faith that it would come to Minnesota, although it came even sooner that they had hoped. “I had no idea when the feds would pick it up, so I didn’t think it would happen this fast, but I did think it would happen during my lifetime,” Joann adds.

When asked about what makes the relationship a success, Joann responded, “If there’s a single piece of advice I’d give to any couple, it’s about always putting the other one first, not to the point that you lose your personality, but that you make sure that everything works for both of you.” Joanne goes on to speak of a challenging time for them: “We remodeled the house together for 3 1/2 years. Wallpapering together–oh my God! Sometimes it means you have to step back and let it sit for a little.”  They are practicing “letting it sit” in deciding on the next stage of remodeling the house, which one is keener on than the other.

Their wedding will be in the new chapel at United Seminary, the place where it all began. Music will play a prominent role as Joann used to be the executive director of the Twin Cities Gay Men’s chorus and Connie has always sung in a choir. Joann adds, “We will have been to a lot of weddings before we get to ours, so maybe things will change. I think that is one of the things that gay couples get to do, define what the ceremony looks like.”