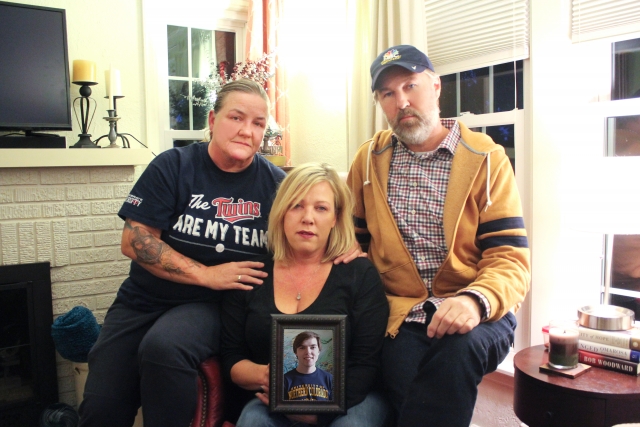 Joshua Kloek was the son of Rebecca Waggoner (center) and Steve Kloek (right), and was co-parented by Waggoner’s wife Kay Johnson (left). Photo by Chris Tarbox

Before reaching his 20s, Joshua Kloek seemed to know what he wanted to do with his life.

“He said, ‘You know, attorneys see people on their worst day. I actually want to be a teacher so that I can help kids have their best day,'” quoted Rebecca. “He was smart as a whip. His potential was so great. And I had to be reminded that the hardest part about this is that you can’t focus on what might have been.”

On June 12, 2019, Rebecca, her wife Kay Waggoner-Johnson, and Josh’s father Steve Kloek experienced any parent’s worst nightmare when Joshua passed away unexpectedly. He was 19 years old.

“Every parent says this, but he really had the capacity to make the world a better place,” said Rebecca. “He had his roommates at his funeral; to get here, they drove 14 hours overnight to get here because…they loved him so much. He touched so many people. You can’t get better than that…which makes this just so much worse.”

Before his passing, it seemed as though Joshua had everything going for him. An education major at the University of Northern Colorado, Joshua was beloved by his family and friends as a bright, loving, generous human being. Last summer, he came out to his parents as bisexual, and Rebecca, Steve, and Kay immediately welcomed his coming out with love and affection.

“He was a freshman in college, and he had come out to me last summer,” said Rebecca. “It wasn’t a big deal at all. He lived in a world where he was very open about that at school. I don’t know if he was as open here, but I know that all of his roommates knew.”

“I was like, ‘Oh! I would not have thought that.’ But it definitely wasn’t a source of anger or a source of fear for him,” Rebecca continued. “He was used to having a life surrounded by LGBT folks. It was literally a casual couple of conversations, which I can only wish for everybody.”

“He loved life,” said Steve. “He was just this wonderful, social, engaging kid. He was into everything and anything.” 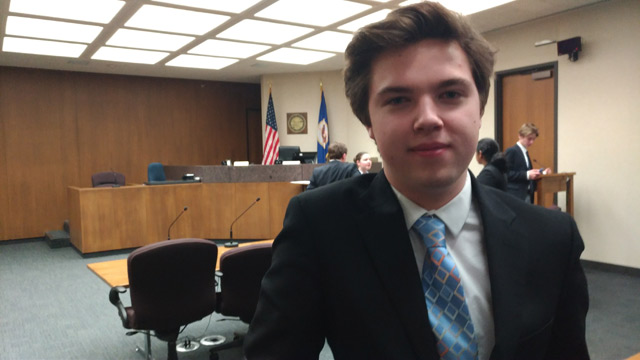 Joshua Kloek, who was an education major at the University of Northern Colorado, had come out as bisexual in 2018. Photo courtesy of Steve Kloek

This made the manner of Josh’s sudden passing all the more painful for his parents, as Josh became another casualty of the growing opioid epidemic. Josh, who was visiting home during summer break, was found in his father’s Southwest Minneapolis home after succumbing to a Fentanyl overdose. Fentanyl is an extremely powerful opioid meant for pain management, but is also known as a recreational drug that was the most common cause of American overdose deaths in 2016, according to the National Institute on Drug Abuse.

“For perspective, heroin is two- to five-times as strong as morphine,” said Jon Hartman, addiction program supervisor at the Hazelden Betty Ford Foundation. “Fentanyl is 50-100 times more powerful than morphine. Like other opioids, it’s used in prescription form (as a patch, a shot, or lozenges) to treat severe pain and, sometimes, chronic pain if patients have developed tolerance to other opioids. But it’s also made illegally in labs in powder and liquid form, and often laced into other street drugs because it takes so little to produce a high with fentanyl.”

Fentanyl can also be imprinted into pills that resemble other opioids, and given the extreme potential for fatalities with the drug, a single use can prove to be deadly if the dosage is not properly measured, in addition to the risks mentioned earlier.

“I saw him as living the perfect normal healthy teenage life,” added Steve. “He goes to college, he goes to parties, not to the excess. He tries things. Can any one of us honestly say that we never maybe took a pill here and there in college?”

“Part of the thing that just makes me so mad is that he came all the way back here,” Rebecca continued. “He was here for three weeks, and he got a pill from somebody who knew how it was made in a basement in Minneapolis by some freak show who didn’t count the Fentanyl right. I had to look at his death certificate, and he died officially of Fentanyl and heroin poisoning.” 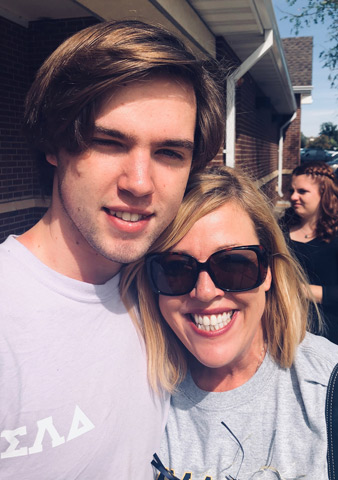 Joshua Kloek, seen here with his mother Rebecca Waggoner, passed away this past June from an opioid overdose. Photo courtesy of Steve Kloek

Although Joshua never displayed any sort of addictive behavior as far as his parents knew, Hartman was careful to mention that “addiction” can be a loaded term.

“The field looks at substance use disorders on a spectrum now: mild, moderate, and severe,” said Hartman. “The CDC reported 422 opioid-involved ODs in Minnesota in 2017; that number has doubled in nine years. We saw almost 2,000 ER visits for opioid-involved ODs in 2018, and in 2016, according to the Minnesota DHS, there were 10,332 treatment admissions for opioid use disorder alone.”

“He told me that he’d tried [pills] in college,” said Steve. “I saw no indication of him being a regular user at all. And if it had just been a regular Percocet or something, he’d be here. It’s 100 percent the Fentanyl in my opinion.”

“And that’s the misunderstanding,” said Kay. “I think a lot of people go under the assumption that there was an addiction to it, and it wasn’t.”

“I was kind of happy when I found this one and I think it was beneficial,” he said. “Listening to so many of them, it seems like you know their children might have been 23 or 24 or 25. They battled with addiction for the most part for years and so on. And that brought out a couple of things in me; I wish I’d had a fighting chance to help him and known if he had some issue.”

Nonetheless, Rebecca expressed frustration that there aren’t enough such groups to help parents and families in similar situations.

“You think about the sheer number of families and friends that are going through this,” she said. “And there’s one group in the Twin Cities that meets once a month. And if you can’t go to that, you get no support in a group setting. So there needs to be more counseling, there needs to be more opportunities.”

Hoping to create a sea change for loved ones of those suffering from addiction, Joshua’s parents are forming the Joshua Kloek Foundation, set to be fully incorporated by year’s end.

“[It’s about] finding and working with hospitals, working with mental health groups, working with parent groups to be able to offer support for friends, family members of kids who die of an overdose,” said Rebecca.

The foundation will focus on education and advocacy, reach out to marginalized communities impacted by the crisis, as well as focusing on harm reduction strategies such as the availability of Narcan antidotes and Fentanyl testing strips. Acknowledging that there’s no easy answer about whether to legalize or restrict drugs to save lives, Josh’s parents agree that there’s no legislating or arresting one’s way out of solving the crisis.

“Ultimately, we have to change the way we have the conversations,” said Rebecca. “How do we make sure that kids are safe? How do we make them look at a pill and say, ‘Does it have an imprint on it?’ How do we get them to use Fentanyl testing strips if…they don’t know what it is? How do we get every bar, every frat, every sorority…to know how to use Narcan appropriately? Every public gathering space should automatically have Narcan and be trained to use it.”

“Narcan saves lives,” said Hartman. “It really is that simple. The notion that Narcan somehow allows addicts the freedom to keep using is ridiculous and reflects zero understanding of addiction. No addict I’ve ever met slows down long enough to consider whether there’s Narcan available nearby in the [off-chance] they OD. Using is just not that rational. Why are we still splitting hairs about this when we’re losing hundreds and hundreds of Minnesotans every year?”

In the end, the Waggoner-Johnsons and Kloek hope that their efforts will expand resources for those whose loved ones either deal with long-term substance abuse issues, or those who overdosed in isolation situations like Josh. Rebecca says issuing platitudes such as “Don’t do drugs!” aren’t enough to address the problem.

Rebecca recounted her final conversation with her son, two days before he died. It was a light-hearted conversation about Waggoner’s misadventures fixing up patches of grass on her front lawn. Josh jokingly implored his mother to “do better” with her lawn care.

“And I was like, ‘Oh, I love you,'” said Rebecca. “And [those were] the last words I said to him. Because that was our joke: ‘Do better’, because I would tell him to do better. He would tell me to do better. We would laugh about it. And I never thought that was going to be the last time I saw him alive.”

If you or a loved one are struggling with substance abuse, visit www.hazeldenbettyford.org for treatment resources, education, and relapse prevention, or call 1-855-402-9581.

Opioids In The GLBT Community

Although the opioid epidemic is widespread and affects all demographic groups, the impact has certainly been felt in the queer community.

“Although opioids are not the most used substance(s) by the LGBTQ+ population, its impact is felt on the population in that the use of heroin and other opioids has a high mortality rate when used,” said Todd Connaughty, director of clinical services for the Pride Institute. “Approximately 10 percent of the LGBTQ+ population seeking treatment use heroin and/or other opioids, which is staggering when you consider the number of LGBTQ+ individuals there are in the world AND the number of LGBTQ+ individuals that actually seek treatment.”

Connaughty said that the queer community is at higher risk for not only opioid abuse, but mental health issues and substance abuse in general.

“The LGBTQ+ population is a marginalized community that is considered a sexual and gender minority,” he said. “The sexual and gender minority stress model posits that LGBTQ+ individuals are exposed to increased discrimination, oppression, stigma, violence, and bullying than heterosexual individuals. The impact of this, as well as the high rates of trauma, lead to higher rates of substance use and mental health issues (co-occurring disorders).”

One major roadblock faced by queer folk who suffer from substance abuse, says Connaughty, are factors such as violence, discrimination, bullying, and intolerance.

“Often times, these negative messages are internalized by the LGBTQ+ individual leading to shame, a lack of self-worth and self-esteem, and invalidation,” said Connaughty. “Another road block that LGBTQ+ individuals face are institutional barriers including access to providers that have expertise in understanding the specific issues and needs of the LGBTQ+ community. It is not enough for a provider to claim that they are sensitive to the needs of the community. Providers must do the work to understand the specific and nuanced issues that may be present based on the LGBTQ+ identity.”

For more information on the services offered by the Pride Institute such as recovery programs and treatment residencies, visit pride-institute.com.