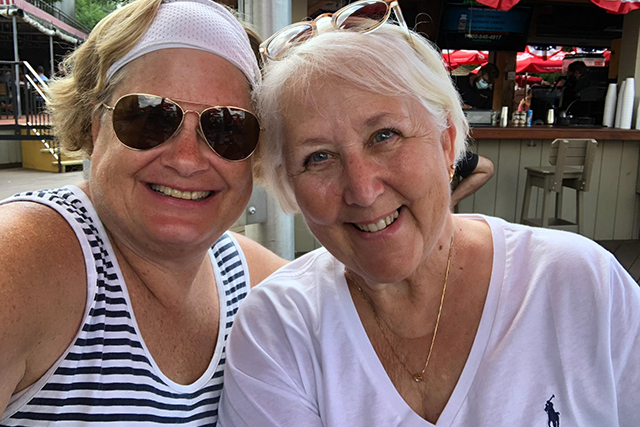 Two Minnesota teachers fell in love while working at the same school. More than two decades later and they’re still living life to its fullest.

“We have been together since then,” Ahmann says. “We had a church wedding in 2000 and a Minnesota certification ceremony/recommitment in 2013 [when same-sex marriage was legalized in the state]. We celebrated twenty-two years on July 22, 2022.”

Four years into retirement from teaching, Ahmann currently works during the tax season as a staff preparer at ROR Tax Professionals, and she also volunteers as a VITA Tax Aide preparer for AARP, which provides free tax-prep services for folx over the age of fifty and taxpayers who are historically underserved.

Though her teaching days are behind her, Ahmann says that her favorite part of being an educator was having fun with students. “I still love their energy and their enthusiasm for a topic in which they are interested. But my favorite thing about retirement is spending time at the cabin,” she says.

Zimmerman, who is in their last year of teaching before they join Ahmann in retirement, says her favorite part of teaching is “Building community and learning together with students are my favorite things.” But, they say, they are “Looking forward to traveling and sleeping in!”

As two LGBTQ educators, Ahmann says “it is hard to know who to come out to and when to keep quiet instead.  School districts and buildings within districts vary widely on how out a staff member can be.”

Regarding recent attacks against LGBTQ educators, including the banning of LGBTQ books, Zimmerman says, “I’m a media specialist. WE BAN NO BOOKS; this is censorship, and I am fully against it.”

Ahmann adds, “In my law classes, we studied all of the movements that resulted in liberation for minority groups, including my own. I did not have any problems with that curriculum in my district.”

As two women who are heading into retirement as a couple, Ahmann points out some difficulties that they are bound to face.

“Statistically, women make less money than men throughout their lifetimes so that impacts retirement income,” she says. “I sometimes feel more vulnerable as two women who are aging/retired as compared to a male couple. It may not be true, but it’s a feeling I have. As we look ahead to being snowbirds, my number one criteria is community support and belonging. I want to be able to be out, proud, and have a great circle of friends wherever we land for the winter months.”

Zimmerman echoes Ahmann’s sentiments, saying “I believe it is harder for two women than two men to retire. I tend to think that people dismiss older women and their opinions and needs from health, to finances, to service in a store. As I age, I feel more physically vulnerable because I am not as strong. When we travel, I feel less safe than when I was younger.”

Case in point: Ahmann didn’t begin teaching until 1994, so she needed to teach for at least twenty years somewhere to be able to retire. “I worked longer than most teachers, but I didn’t start in my twenties like many did,” she adds.

And for Zimmerman: “I was hoping to be retired last year, but that didn’t work out.”

But with Zimmerman’s retirement now on the horizon, the couple is planning for this next exciting chapter of their lives together. And with nine grandchildren, they certainly won’t be running out of things to do any time soon.

“All of the kids and grandkids live within seven or so hours by car, so it’s possible to take road trips to visit them,” Ahmann says.

As their teaching careers come to a close, Ahmann and Zimmerman will have a lot to look forward to—and a rearview mirror to help keep the happy memories alive.

Additionally, the two are planning to do more traveling, beginning with a trip to Iceland, Ireland, and Scotland once Zimmerman’s school year ends.

“We want to spend some significant time in Palm Springs, California, next winter to see if that’s a community fit for us to consider it as our winter home,” Ahmann adds. “We also need to make some decisions about our cabin up north and our house in the metro.”