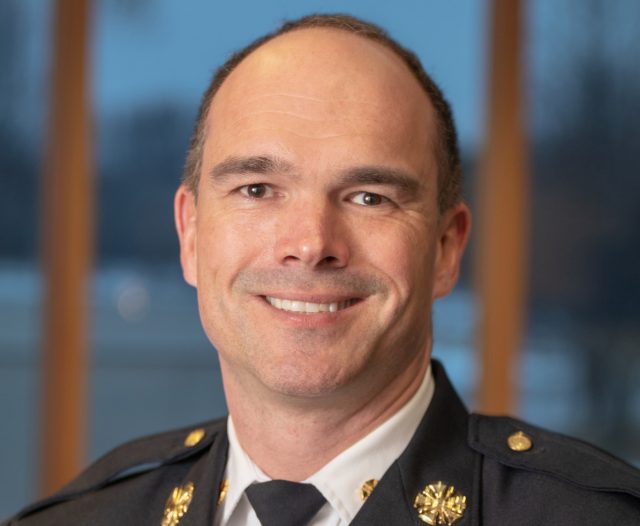 John Cunningham is the chief of the Brooklyn Park Fire Department. Photo courtesy of the City of Brooklyn Park

As the chief of the Brooklyn Park Fire Department, John Cunningham has been dedicated to a life of public safety, even way back in his middle school years.

“I’ve been over on the fire service for over 21 years,” said Cunningham. “I started when I was 13 as a fire explorer, became a volunteer firefighter up in Connecticut. And then I was hired in Elk River, Minnesota, in 2009 as a full-time chief and I’ve been in Brooklyn Park for almost two years now.”

Cunningham, who lives in Elk River with his husband and their two dogs, said that the current COVID-19 health crisis has created a strange new normal for himself and his fire crew.

“We acted very quickly when we knew that the pandemic…was in the United States spreading across the country,” he said. “So we made some strategic decisions to make sure crews were immediately protected and deploying additional PPE to all our firefighters. We did have to shut down our stations to the public, just out of protection for our staff to make sure that we lessen any contact that they might have with the virus.”

Cunningham said that his top priority as fire chief is to ensure the safety of his firefighters, and to make sure that they can continue their work in serving the community.

“[For] the fire service, we have no option to work from home,” he said. “So from a PPE deployment order, firefighters have N95 masks, gloves, feet and eye protection. So they’re deploying that on every call that they go to, just out of abundance of caution. We need to protect not only ourselves, but also our patients from cross-contamination. We respond on almost 10,000 calls a year.”

Cunningham, who also serves as the city’s emergency management director, said that the social distancing parameters has proven sometimes challenging for his crew.

“I think that we have a great fire family,” he said. “We support one another in times of crisis, good times and bad. But it’s weird in that we don’t get to see each other as much anymore, as our stations don’t contact each other. They don’t have personal interaction, except at calls.”

“That can be hard because we are one big family and we want to be there for one another, and we just don’t have those times to see each other one-on-one,” Cunningham added.

“I think we’re seeing that now in a public health crisis on just how vital our nurses, our doctors, our medical providers [are to the community],” he said.

Cunningham also said he couldn’t be any prouder of how his fire crew has performed during this crisis.

“I couldn’t ask for a better crew,” he said. “They are just great at what they do with the resources that they have. We have full-time and part-time staff that [has] 24-hour coverage every day. As chief, it’s a privilege to serve and to lead this team every single day, but especially at a crisis. I sleep well at night knowing that I have highly trained, experienced, dedicated firefighters that are ready to serve.”

Cunningham also strongly encouraged the public to follow guidelines put forth by public health officials to help defeat the spread of COVID-19 in our communities.

“Look out for yourself and for everyone in the community,” said Cunningham. “The actions that you take, however small, you might think that they are going to be protecting someone, especially those that are vulnerable populations.”

“Even if you’re a healthy younger adult, you may not be as prone to being gravely impacted, but someone that you know or may be in contact with might,” he continued. “So the best thing we can do is practice social distancing. Stay home if you’re sick, keep social distancing in place. Wash your hands, don’t cough on people.”

Cunningham said that since this pandemic will play out over months and not days or weeks, we need to be properly prepared in public and at home.

“Supporting one another is more important than ever,” said Cunningham. “There [are] other pieces of this other than just a health care impact, from emotional trauma and mental well-being, to our economy and the people that might be struggling to make ends meet financially. So the only way that we’re going to overcome this is to work together as a community to support each other.”