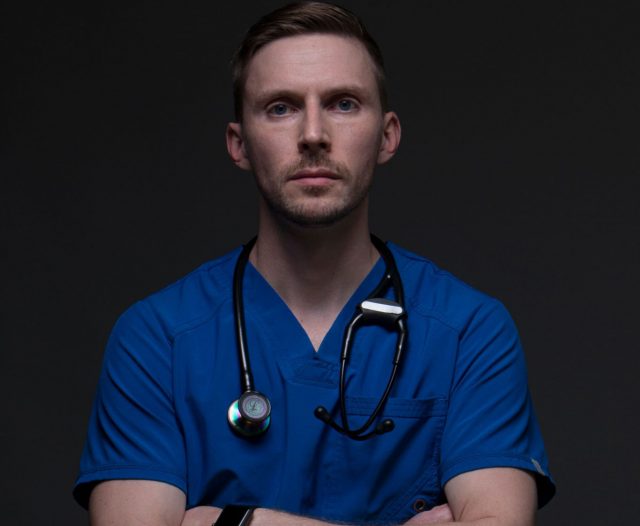 Although many of our amazing medical professionals and first responders at home are doing all they can to combat COVID-19 in Minnesota, the broader spread of the virus is so complex and precarious that some of them are devoting their time and talents to fight the pandemic outside of our state borders.

Jay Martin, a registered flight nurse, did just that when he traveled to New York City in April for a six-week stint of assisting in critical care services.

“I work for North Memorial, their helicopter emergency medical services,” said Martin, who is also an Army veteran who served from 2006 to 2012. “That’s what I do full-time in Minnesota. My job consists of critical care transport a hundred percent of the time, that’s all I do.”

When the pandemic originally started earlier this year, Martin remained in Minnesota due to the uncertainty of the virus’ reach and impact at the time. But when the state began to see a lower number of cases, Martin felt that he needed to lend his talents to places that needed them the most.

“I guess we weren’t really flattening the curve, but we weren’t seeing the spike that we thought we were going to see as quickly,” he said. “I can to go help somewhere that needs me. So that’s what brought me here: I knew they needed help. I packed up and came out here for six weeks.”

During his stint in New York, Martin worked at a small hospital on Long Island as a critical care nurse. He said that hospitals like the one he worked at only has 10 ICU beds on average, and they had upwards of 40 ICU patients in the heat of the crisis.

“The biggest thing they’ve done is limit visitors… completely,” said Martin. “It’s unfortunate, but no visitors can come in. They’ve done a decent job of giving us PPE (personal protective equipment). So we have tieback suits that I put over my scrubs every day.”

Martin said that when the hospital lacked equipment, workers could bring in their own, such as a N95 respirator that he brought in to work every day.

“They’re letting people bring in what they need to protect themselves, which is great,” said Martin. “I can’t say that for all the hospitals around here… so I’m extremely thankful for that. I think the biggest part is probably limiting the visitors that come in and giving us whatever they have to protect us, really.”

Martin noted that the pandemic has brought out just how important self-care is, especially for health professionals.

“A lot of us deal with trauma like this on a less frequent basis just in our career. But dealing with so much trauma…so frequently, it’s brought about how important self-care is, and having people to talk to, going home and taking care of yourself properly: just having a whole regiment, really,” he said. “When I go home, I just take care of myself. A lot of rest. Some yoga, a hot bath. Something just to help me relax and decompress. That’s pretty much what it consists of, before we jump right back into it the next day.”

Martin’s adjustment to quarantine has been considerable in his personal life. Already in a long-distance relationship with his boyfriend, Martin rarely, if ever, makes contact with anybody outside of work.

“It hasn’t been a hard adjustment, I think, for me, because I don’t really have time to do anything,” he said. “It’s consisted of a lot of FaceTime, a lot of phone calls, Zoom. My family Zooms probably once a week. It’s weird to think about where we’re at and where we got to in a matter of six weeks, seven weeks. It’s insane.”

Martin stressed that this pandemic has created an even larger appreciation of our public health framework.

“Public health funding is something that’s cut so frequently, so easily, like, ‘Oh, we can just get rid of it,'” he said. “I think this places a huge importance on having that public health framework and network to not only combat the pandemic we’re at now, but to predict and to get us ready for things in the future. It’s so complicated that it’s really hard to put a finger on, but everything from first responders to providers in the E.R. and ICU… there’s a big variety of what is important.”

Martin was blunt when offering advice on how we can all stem the tide of COVID-19.

“It’s extremely simple: listen to the scientists and the health officials,” said Martin. “That’s pretty much it. I mean, listen to what the health officials are saying. Follow the orders. Being where I’m at and being in the job I’m in, my stay-at-home part of it has been limited because I’ve been working the entire time, so I can understand the stress of people.”

“It’s so extremely important to listen to what the health professionals are telling you, especially those with backgrounds in infectious disease and epidemiology,” he continued. “My worry is that we’re going to get bored with the lockdown and we’re going to end up cycling back in to another outbreak if we don’t listen to those people that are telling us we need to stay home.”