The Women of Wise Acre Eatery 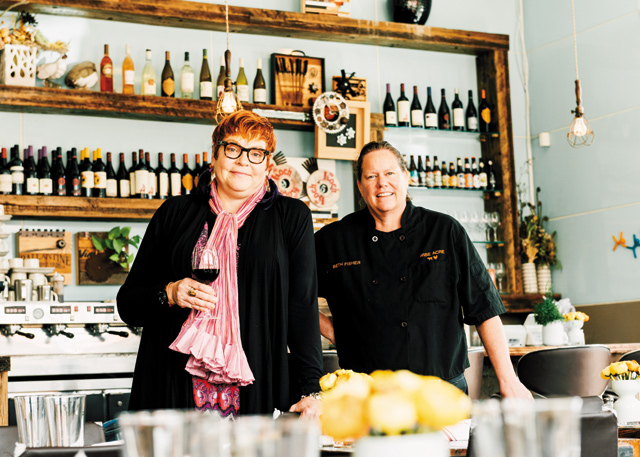 In many ways, the team leading the kitchen and the front of house inside Wise Acre Eatery are complete opposites. Chef Beth Fisher is direct, her speech peppered with line cook phrasing. The youngest of three, and the only girl, she embraced the special brand of love found working in a professional kitchen. That kind of teasing reminded her of her brothers.  Fishers’ chef pants are accessorized with battle scars, she prefers her hair pulled back and her t-shirts black. Caroline Glawe grew up the eldest of her siblings. She exudes the easy going, warm hospitality for which the restaurant is known.  She found her initial profession in human resources, protecting companies, helping employees, pulling together strong teams to get the job done. Her stylish hair is perfectly coiffed, and it’s clear she embraces bold colors. For some, these differences would lead to contention. For these two, it’s a sound foundation of a love that has lasted for over twenty-three years.

The two first met through the ads in the publication Equal Time. “In those days, it was the only way to meet people, other than bars,” said Glawe. “I wrote an ad and got a lot of great responses, but no sparks. I was just combing through the other ads – having fun and getting ideas on how to write something better.” Beth’s ad caught her eye. She was charmed by the writing and reached out, planning only to share the compliment. She signed her letter with a cartoon caricature of herself. It was when they first spoke that the thunderbolt hit. “I knew right away,” she smiled, “the timbre and tone of her voice… I like this person.” 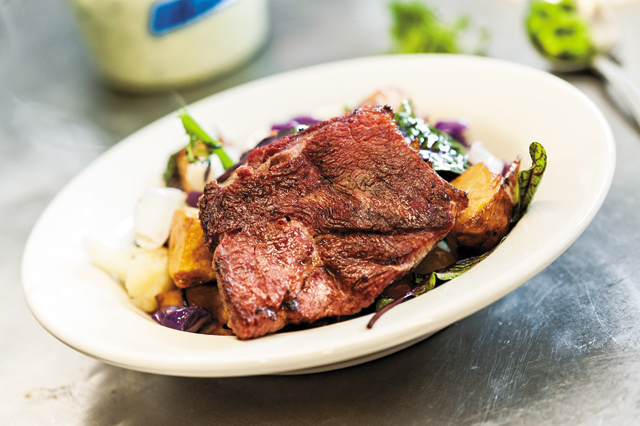 Their first date began at Café Wyrd and progressed to a nearby Mexican restaurant, Two Pesos. Glawe was still on her best first date behavior, sipping a Diet Coke and admiring Fisher as she dug into a burrito.

“And probably drinking a beer,” she interjected.

Glawe admired her confidence, her ease and before long, they would embark on several adventures.

Meanwhile, Chef Fisher was working at Lucia’s, the seminal locavore restaurant, alongside Lucia Watson. Inside that kitchen she was able to promote her love of farm fresh cuisine. Fisher had grown up first on a farm in Arkansas, before moving with her family to Deephaven. Her father had been an engineer who sold strong-bar steel at state fairs. Her mother was a stewardess when they met. The family lived in Minnesota, but would always return to the South for the summers. It was there that the young Fisher spent time in the kitchen with her grandmother creating taste memories that can be found all over the menu at Wise Acre. (Just get a mouthful of those biscuits and her grandmother’s recipe for white gravy.) 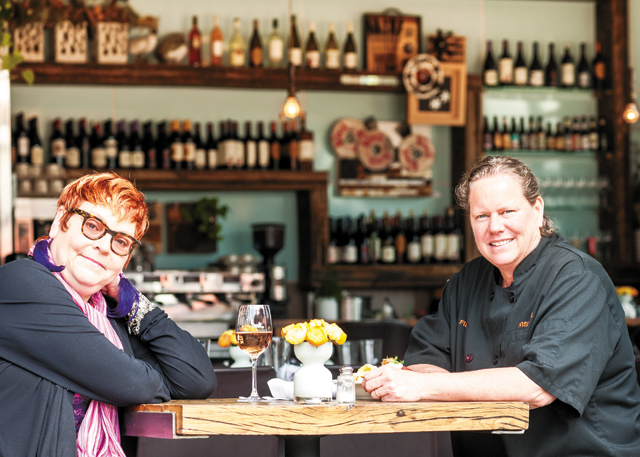 When Glawe was staring down the barrel of another Human Resources job, the two realized they would pretty much never see each other. A restaurant job means working while the rest of the world is out having fun. At Fisher’s urging, she followed her passion for entertaining and great wine and dove back into the hospitality world she’d left behind in her teenage years. Glawe found herself inside Bobino, working with their wine program and getting the chance to really dig into her passion for not just the wine, but entertaining people. Her gracious nature and ability to organize made her a perfect fit.

Eventually the two began their own consulting business TWO Food & Wine Design. After nearly thirteen years of working in Lucia’s kitchen it was time for Chef Fisher to develop her own cuisine; to find her own food voice. She reached into those memories of cast iron skillets, collard greens and plenty of bacon. The bacon you can find on the plates she sends out now for her scrumptious breakfasts is the culmination of those first forays into what she wanted to cook.

The two already knew Scott Endres and Dean Engelmann as the owners of Tangletown Gardens and they were excited to read in the neighborhood newspaper that Endres and Engelmann had purchased the erstwhile Liberty Custard building next to their lush shop and would open a restaurant, which would be Wise Acre Eatery.

This was the moment when these two took a deep breath, reached for each other and leapt into the next chapter in their story, with Endres and Engelmann. That was three years ago and fans have fallen hard for this beautiful spot, covered in greenery and dotted with reminders of the farm where all the ingredients are sourced.

That farm has been in Engelmann’s family for four generations. What struck Fisher and Glawe was the way they cared for the animals and the land. Both women have family roots in farming and both were so glad to see the way the Engelmann family cared for their animals and the land. There are no pesticides, no pumping their animals up on antibiotics, and cramming them into pens. “It’s an expensive way to farm,” said Fisher. Everything aligned with their beliefs. 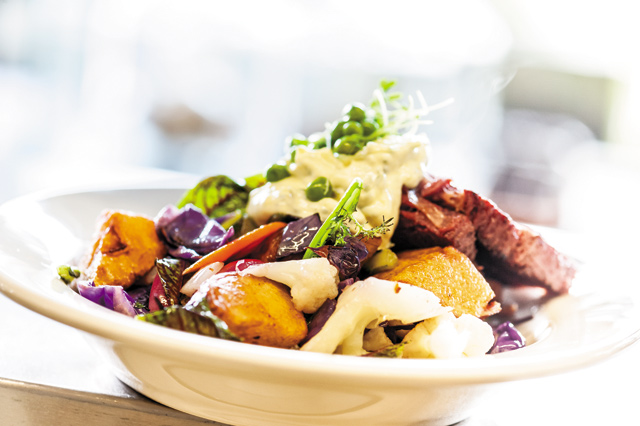 “It was serendipity,” says Glawes.

In the time that they have been running the front and back of the house at Wise Acre, the staff has become extended family overseen by these two proud mamas. There’s very little turnover and the customers have become beloved friends. It’s a community in this picturesque corner of Minneapolis where they’re making the world a better place one plate at a time.