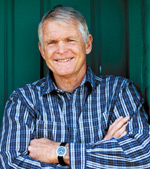 The postwar baby boom gave birth to the generation of gays and lesbians who came of age in the time of burgeoning progressive thought that brought about the civil rights and women’s movements, as well as Stonewall. Boomers pioneered gay rights, and laid the foundation for legislation that today provides protection from discrimination on the basis of sexual orientation or gender identity. They survived the AIDS outbreak, and pushed for better health education.

They exploded out of the closet, and gave the gay community something to be proud of. Now, as retirement looms on the horizon, some are facing the real possibility of having to retreat back into the closet, as a completely different set of financial and social obstacles faces them.

Growing older isn’t for the faint of heart, and no matter how much we want to postpone it with Botox, we all age. It takes verve, guts, and a dash of panache to clear the hurdles aging puts in our path, but older members of the GLBT community are finding that aging gracefully, if not with finesse, is possible when you know what some of the obstacles are, and prepare for them. Yet flexibility and resilience still are needed to rebound from the surprises life as an older person presents.

Certainly, older GLBT Americans face the same kinds of issues as their counterparts in the same age bracket in society as a whole, but some facets of aging are magnified within the gay population. Those raised in more conservative areas or in traditional households have had more at stake, because when baby boomers were coming of age, identifying as gay or lesbian was more likely to have had a more significant cost in terms of financial or job security or in family relationships. Gender identity, until recently, wasn’t even in our vocabulary.

Contrasting that with the current generation, where coming out is becoming increasingly common and accepted, it’s understandable that some people who are gay have spent a lifetime on the fringe of the GLBT community, but never actually have come out. Many understood, for example, that men who never married were “confirmed bachelors,” but because of so-called family sensibilities, never really referred to them as homosexual or gay.

In later life, when family traditionally has served as a more important source of support and help, a lifetime of isolation or estrangement from families of origin becomes a considerable liability. For that reason, families of choice, for a growing number of aging gays and lesbians, are an important part of their social network. One component of the fabric of a chosen family is affinity groups.

Prime Timers is an organization meeting that need for a number of older gay and bisexual men. For nine years, Harry Hartigan, 60, has been involved with the group, which has been more than a social network for him.

For Hartigan, Prime Timers has been his emotional support where, he shares, “I can talk openly and honestly about my issues.”

Hartigan’s concerns underscore the critical need for a vibrant social network, as well as highlight the vulnerability of the aging GLBT population to potential con artists, or to the perception that disclosing one’s sexual orientation to health-care providers might bring about inferior service.

More than a quarter of GLBT baby boomers express “great concern about discrimination as they age,” according to a 2006 MetLife Mature Market Institute study. Among lesbians, the response was particularly strong, with 12 percent stating they have “absolutely no confidence that they will be treated respectfully.”

Susana Jacobson, 60, captured the sentiment in saying, “Health-care people don’t get it—don’t get our issues—and the law does not take our families into account [for visitation].”

The combination of both of these major concerns points to the top source of unease among GLBT seniors: loss of independence. Of the MetLife study respondents, 74 percent reported they are afraid of not being able to take care of themselves. Similarly, another significant number were concerned about becoming dependent on others, sick, or disabled, and outliving their income.

Financial independence is more of a concern for older lesbians than gay men, likely the fallout of a lifetime of pay inequality in the workplace. Many lesbians left traditional marriages, and entered the workplace later in life, forcing them to make up for lost years of retirement planning, while often raising children at the same time.

Marriage inequality and existing estate laws further highlight the issue, and survivor benefits are merely the tip of the Social Security iceberg. As the government continues to spend Social Security surpluses to offset budget deficits, people are counting less on receiving their hard-earned Social Security benefits, and, therefore, are retiring later than ever.

And then, the existing tax code does not recognize same-gender couples. As written, it sees the passing of a home to the survivor as an inheritance, even though it may have been owned jointly, increasing the likelihood of losing that property because of the tax liability when one partner dies.

Shelter, of course, is the most basic of needs, and housing concerns among the older GLBT population embody each of the points noted so far. The vast majority of us want to live independently in a place that is welcoming, and, of course, affordable. The MetLife study reports overwhelmingly that GLBT seniors, like most Americans, want their final days to be in their own homes.

Hartigan echoes that sentiment: “I personally will do everything I can to remain independent as long as possible, but it would be nice to have a GLBT senior housing option available.”

Spirit on Lake is a 41-unit cooperative housing project that will be one such option. The ambitious project is an outgrowth of GLBT Generations, which brought Spirit of the Lakes United Church of Christ and Powderhorn Residence Group together. The first-of-a-kind venture for the Twin Cities is designed specifically with aging GLBT and allied people in mind. It is scheduled to open in late 2009 in the Midtown area of South Minneapolis.

GLBT Generations founder Barbara Satin cites PFund and Headwaters in moving Spirit on Lake toward reality, noting, “We’ve been able to get a better understanding of the needs and concerns of our GLBT community, and develop strategies to achieve our goals of helping GLBT people maintain a positive quality of life in their later years.”

Currently, very few of these types of housing projects exist, and most are still on the drawing board. There are still a lot of mixed feelings about them.

Jacobson sees the benefit of a GLBT facility in terms of compassionate staff, especially when intimate physical care is involved, but adds, “Many political and social issues have brought gay women and men together in organizations, [but] I think our ‘cultures’ are often very different.”

While seniors certainly face a lot of hurdles, many of these resilient people have the ageless, intrepid spirit that their experiences as GLBT Americans have forged. The MetLife study pointed out that gay men and lesbians, who have navigated the coming-out process, tend to cope more successfully with other life crises. Almost four in ten respondents stated they developed positive character traits, greater resilience, and better support networks because of being GLBT.

Life in our later years may not be the stuff of romanticized “golden years” poetry, but neither does it need to be something to dread. The path to a happy life after retirement is paved with sound financial planning and investments. It involves discussing and documenting your health-care wishes in the form of advanced directives and long-term care. Peace of mind for both you and your partner comes as well through taking the time to guarantee your legacy is preserved for the survivor by executing the legal documents to ensure final wishes are carried out as planned. It may be a hard discussion, but one that will be a capstone to a lifetime of accomplishment, commitment, and love.

Finally, in reaching out to others to complement your family of choice, a life shared with laughter and companionship makes it truly worth living…and still fabulous after all these years.