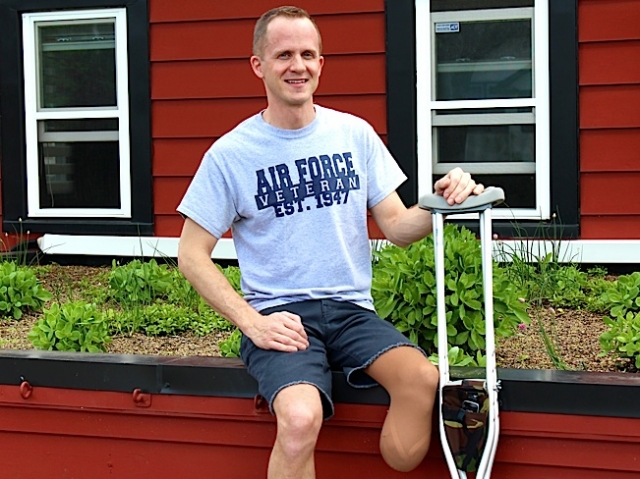 Erik Holmgren is a military vet with a mission. He wants to help other veterans, especially new amputees and gay veterans. He has had more obstacles in life than most, yet feels his struggles have made him a better person. He states, “the challenges in my life didn’t come to destroy me, they have pushed me forward to realize my hidden potentials.”

Raised on a turkey farm in central Minnesota, his parents were of Swedish ancestry and followed a fundamentalist evangelical faith. “In the 5th grade I realized there was something different about me, I was gay, but I didn’t really know what it meant. I never talked to anybody about it,” he recalls.

Holmgren made plans to join the Air Force during his senior year of high school.  Two months after graduation he was stationed in Southern California, “I fell into it with a bunch friends from the Southern Baptist Church. They were teaching me all these feelings that I had inside of me were wrong and I was an abomination.”

It was 1991, and the U.S. military was preparing for the first gulf war. He was flown to an air base in Saudi Arabia. “We were high up in the mountains, there were enormous amounts of mosquitoes, worse than growing up in Minnesota. I worked the night shift and every other night there was a big tanker truck that would drive around, it was run by the Saudis, there was a man in the back wearing this big chemical suit and he would spray the stuff into the air and this giant cloud of chemicals would roll into the hangar and I would be breathing this all night long.”

Holmgren endured the regular chemical exposure for six months.  During this time he also injured his ankle, it was a routine hairline fracture. But nothing ended up being routine for Holmgren.  While still in Saudi Arabia he began having problems with vertigo.

He finished his stint oversees and returned to the base in California.  He was soon diagnosed with labyrinthitis, severe swelling of the inner ear.  Chemical exposure is a known cause.   A few years later a rare giant cell tumor was found where the fracture had been in his foot. It was a benign tumor that devoured bone.  “I spent 32 nights in the VA Hospital, and they removed the cyst and filled up that empty space in my ankle with bone cement,” he remembers.   It would be the first of many surgeries on his foot.  The severe vertigo would also dog him. In an attempt to fix it, doctors performed surgery on his brain. It was unsuccessful and left him with hearing damage.

He completed his military service in 1995 and moved away from his evangelical friends.  He became isolated and deeply depressed. He made plans to kill himself.  Then, by chance, he connected with a former high school teacher who convinced him to seek help. He was admitted to the psychiatric ward at Abbott Northwestern Hospital.

He was released from Abbott after eight nights and continued treatment in an outpatient therapy group.  He began to admit the truth about his sexual orientation.  He moved to the Twin Cities and eventually joined the Gay Men’s Chorus. In the chorus he discovered “an amazing family in a safe community of very kind people.” He met other GLBT vets through a veterans program called Homeward Bound at the Minneapolis Community and Technical College.

An avid outdoorsman and gardener, he continued to struggle with problems related to the injury on his foot. In May of 2013, VA doctors were forced to amputate it. “It can either define you or destroy you, I wake up in the morning and I look down and I see only one foot, I think, what is this?  It becomes very dark, frustrating and sad. I tell myself, you’ve been through this, you have enough good moments in your past, get through it.  Go brush your teeth. That is very common. I still struggle.”

He has practiced formal meditation daily for twelve years. Holmgren explains, “The VA taught me how to be mindful, but basically it was meditation. The class is the one thing that has saved my life many times, because they were bold enough to go into Eastern medicine and say mindfulness is of help to our veterans, so let’s do it. It’s the one thing that’s the most helpful with my depression, more than meds, it changes the neural nets up there and helps me to erase or modify some of those old beliefs that were ingrained in me.”

His mother and his brother, who is also gay, came to care for him during the surgery.  His parents have softened over the years.  “Being Swedish, we don’t talk about everything, but there is a lot of love,” Holmgren says.

He looks forward to returning to his yoga class at the VA. Recently, his recreational therapist called and invited him to be part of a triathlon, which involves biking. “I can’t bike because of my vertigo and she told me they’d give me a trike. I was in tears with gratitude because the VA’s now going to help me get out on all these wonderful bike trails.”

However happy he may be with the local VA, Holmgren questions the motives of both of the wars in Iraq and Afghanistan. “It saddens me to see so many new veterans in need of prosthetics. I’m realizing now that life is just so short. I need to do what I can to support my peers and to be happy myself. I was helped by so many people, it’s time for me to give back,” muses Holmgren.