From The Pizza Parlor To The Photo Booth 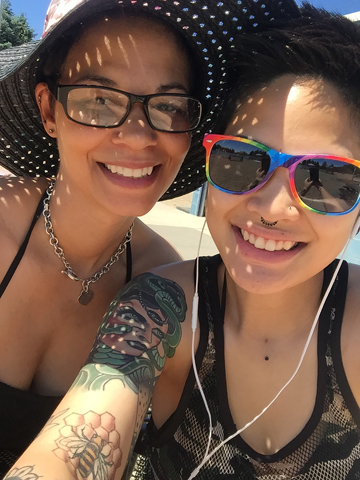 “I am so fortunate to have finally found my forever person!” says Tiffany, left. Photo by Bebe Vongvilay

“They say all that matters in a relationship is that you like the same pizza toppings,” Bebe says. She grins at Tiffany, ready for a reaction that she does not quite get. Tiffany grins back.

Pizza is an appropriate metaphor, considering that Tiffany and Bebe met while working at the same pizza shop in 2014. They quickly became friends and after a year and a few life changes, they realized they wanted more.

“As friends, we had conversations about relationships and always had an opinion about who the other one was dating,” Tiffany says.

In the last five years, Tiffany Hedstrom and Bebe Vongvilay have grown a lot as a couple. They have navigated victories and failures side by side, learned to parent together, and, most recently, bought a house and started a business together.

Learning how to navigate a romantic relationship with someone who has kids can be tricky, especially when the kids still live at home. Bebe has flourished in that role, though, and enjoys being able to tap into her inner child alongside Tiffany’s kids.

“Being a stepmom is weird but it’s pretty cool. I always have someone to skateboard with, beat in Mario Kart and teach me TikTok dance moves. I’m so lucky to be a part of our big rainbow family.” Bebe pauses. “We’re almost empty nesters. It’s been really rewarding. I’m so proud that they’re out here leveling up, making good choices and chasing their dreams.”

Tiffany echoed Bebe’s sentiment about the kids growing up. “I would be lying if I said it didn’t make me feel old, but it’s important for them to get out there and embrace all the ups and downs that the world is going to throw at them.”

Tiffany and Bebe lead by example in that way. They both work hard and play hard, often inviting the kids along for the ride. Currently the couple is hard at work on their co-owned business.

“We knew we wanted to build a business together and follow our dream of being female entrepreneurs,” Bebe says. “PhotoBooth Reelness is a way for us to make people smile, have fun and be goofy.”

Photobooth Reelness is currently a side hustle, but it has been an exciting journey so far. The creativity and passion of both women has kept new gigs coming in almost entirely by word of mouth. PhotoBooth Reelness has been at all kinds of events: weddings, birthdays, corporate gatherings, concerts, and more, and it was only when the pandemic struck that they had to hit the brakes on their fledgling business.

“We are both home on unemployment for the first time,” Tiffany says. “Bee has been furloughed and we have no idea what is going to happen with the marketing industry since being in large crowds is a large part of what we do.” It has been frustrating, but both are hopeful that their business will continue to grow post-pandemic. And, of course, they have been keeping busy with other projects in the meantime.

“We have been spending our extra time at home organizing and updating our property,” Tiffany says. “We spent the first year painting and updating the interior of our home and this year we are focusing on exterior projects.” When they are not working on home improvement projects, they are making the most out of quarantine in other ways, like savoring quality time with the kids and taking online classes.

All the extra time at home has also given Tiffany and Bebe the chance to reflect on their last five years together and how lucky they are to have each other. “Tiffany is the love of my life,” Bebe says, “She brings out the best in me and I love the life we’ve created together.”

“I don’t think that [pizza toppings] are all that matters in a relationship,” Tiffany laughs, bringing everything full circle, “but it is important to have a lot in common.” She credits the success of their relationship and the life they have built together to their willingness to take things slow and build on their commonalities. “If it’s the person you are meant to spend the rest of your life with, you shouldn’t be in a big hurry. They aren’t going anywhere.”

You can check out PhotoBooth Reelness on Facebook at www.facebook.com/photoboothreelness.