From the Editor: The Halloween Issue 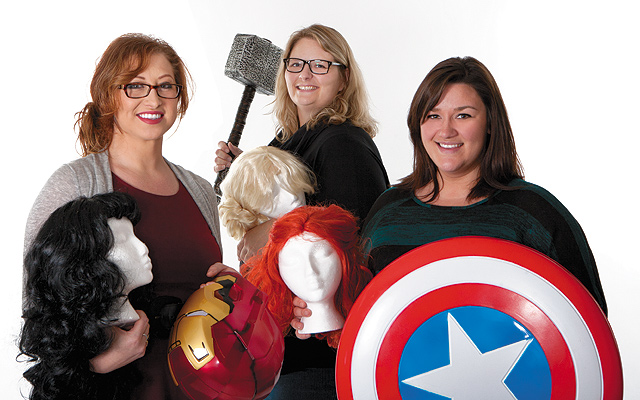 This Halloween Issue is something that has been in the making for two years. When I started this position as Managing Editor, the learning curve was steep (and still is, in many ways). What I learned early on when we had a photo shoot with a drag queen and some sailors from HMS Pinafore at the Guthrie is that if I could think it up and make it happen, it would happen. How many of us get to say that? Holy cow, I’m lucky. It took the two years since to figure out how to make it happen, which is something that comes with experience of the industry and knowledge of the people. Then, the timing. The timing was crucial because, at this time last year, the editorial calendar was made almost secondary to the election coverage and the campaign against the marriage amendment. That’s when I tried to pull most coverage to the conservative for the good of the community. Nobody needed to spook the straights, particularly when they were going to be voting on the rights of this community.

Now that marriage equality is a reality, I’m not going to say that it’s time to just let our freak flags fly, but, okay, yes I am. And, by saying freak flag, I don’t mean it as a negative. I mean that it’s time to not let this community’s sense of expression be curtailed by double standards, holding the people of this community hostage and closeted from even just dressing for Halloween in any way, shape, or form we might choose. As Brett Dorrian says later in her Halloween How-To feature, the sky is the limit. Let’s go there.

So we did. Because we can.

Every two weeks when I plan content for this magazine, I keep in mind that Lavender can do a great many things that other publications can’t; so we should. Because the point of this publication is to embrace all colors of the rainbow, the “rules” are up to us. Genders can be more fluid, depictions of characters can be more open to interpretation. So, we cracked the world of Halloween costumes open and took advantage of this position of privilege. Don Draper with spirit gum stubble? Got it. Really gorgeous “real housewives” played by gay softball players in drag? They’re in here. Superheros are played by the drag, trans, and queer kings and performers. Other queer and allied burlesque performers actually put on clothes–rather than suggestively taking them off–for this piece, something which asked them to be fluid, but in a different way than usual. The same goes for Mrs. Smith who, usually looking for her cat Carlyle with a big Gibson Girl wig on her head, actually appears via her actor’s original gender, as Sherlock Holmes. We asked these performers to step outside of their usual chosen performance comfort zones and do what the rest of us will be doing: assume different roles for the most fun holiday of the year.

Once I’d made the shift in my head that this year was the year to really stake our claim on Halloween and go for the proverbial gold, it was all a matter of making the plans and putting them into action. This is where the aforementioned experience and knowledge was critical to the success of the project. How would we pull off multiple shoots with multiple models and multiple teams in about a month of time?

Talking to Morgan Ross, who’s one of our newest Lavender team members, the plans started taking shape for exactly what this Halloween issue could be. Morgan and I started bandying around ideas and mentioning names and groups of people who could be asked to participate. It was a matter of which was the cart and which was the horse–do we start with the models and then determine which themes to depict and how to go about depicting them, or the other way around? This was when we called in Brett Dorrian for a consultation.

Brett is a makeup artist who worked with us in last fall’s Wedding Issue which was on stands pretty much a year ago, when we were voting against the marriage amendment (Brett! It’s our anniversary!). I knew from talking to her then that she could not only make brides and grooms look picture-perfect for their big days, but that she was also the makeup and special effects person behind The Soap Factory’s blockbuster haunted basement in recent years. So, naturally, when it came time to think of who could assist us with pulling off a Halloween costume and makeup how-to, nobody else came to mind but Brett. In a matter of an hour-long meeting with Morgan and Brett, we concepted a list of themes and possible participants and costumers, with the lofty goal of getting it all done within a few weeks’ time. What seemed like a farfetched dream was met with Brett’s assessment: “I can do it. All.” And we never looked back.

Each of us started reaching out to people who are both ridiculously talented as well as interested in publicity. And the response was tremendous. We had yeses every which way we turned. The circle of talent expanded and soon we had all the pieces put into place and ready to go.

A term from my corporate past is the “multiplication of talents,” which pretty much means that we find what people are good at and let them do their things. The same applies to this situation; once the pros were called in and given their directions, they showed up with their newly acquired zombie outfits and sheriff or trucker hats and thrift-store sourced items to become the roles that they were assigned. The multiplication of talents: find the pros and let them do exactly what they’re hard-wired to do–creative problem-solving and artistic expression. Some of them were asked to simply show up as blank canvases, others were asked to bring their whole Halloween concept to the shoots. And they all did so, perfectly.

As I look at the images, I don’t see the performers or community members, I see who the performers are portraying. Blowtorch is Prince Charming, Tea is Snow White. Bart is Andrea, Mistress Victoria is Lafayette, Karri is Alcide. The piece de resistance is that a shape-shifting character that usually goes from being a man to being a dog is depicted by a pup from the kink community. There are layers to the meanings within each theme and who is playing which role. This is a testament to both the ability of our publication to think outside the box as well as the willingness of our community’s people and performers to actually go there.

Take this issue and apply it to our regular lives, too. Sure, Halloween is a time when everyone who participates in it–from young to old–gets to step outside of our normal and express ourselves in a playful way. But, see what it means for our daily lives, too. See that finding that freedom to be comfortable in someone else’s skin or life for a night or a party is something we can do more often and regularly. Karri, one of the participants in this feature, once mentioned to me last year that it’ll be important for this community to not forget how diverse we are–but how hard we worked together against the marriage amendment and for marriage equality–when we’re no longer actively campaigning together. The person fighting next to us against that discrimination might be into leather or kink (or whatever…perhaps drag or adopting children or going to the seminary) and that’s part of what we’re fighting for: the ability to be free to express ourselves however we choose. I keep that conversation in mind as I progress through the editorial calendar and am extremely grateful to be able to make that notion more clear in this issue. However the members of this community choose to express themselves is acceptable and valid, whether it’s Halloween or a generic Tuesday.

Whether you decide to celebrate Halloween by dressing up in costume or makeup or not, I wish you a very happy holiday. It’s a time when the world gets to step into a bit of whimsy…somewhere I wish we’d visit more often.

I hope you have as much fun as we did.

P.S. Here’s a little soundtrack for you: