From the Editor: The Fallacy of Privacy and the Securing of Safety 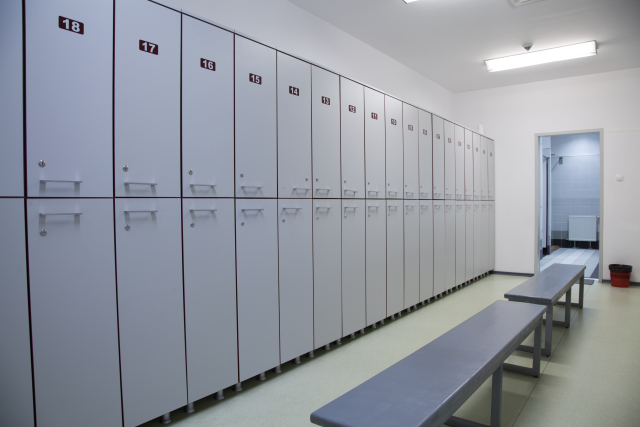 In a magazine dedicated to talking about Sports & Fitness, I find myself at a loss to not recoil at the thought of participating in an organized sport or working out at a gym. Athletics and exercise are daunting for those of us who haven’t yet found physical fitness and sports to be welcoming as a concept or a practice. But, worse, the barriers to accessing these spaces and activities are too great. The stigmas I have to jump over as hurdles are too high. The clubs and locker rooms are mine fields. The private is public and I choose not to accept those conditions.

I’m overweight. It’s a body type that has always existed but has been vilified and othered only in modern times, as the number of overweight people has risen while the cultural acceptance of overweight people has seen a steady declension. While I understand that there is great resistance to drawing comparisons between the struggles of people in different groups, being overweight has given me insight into the challenges faced by people who are transgender and gender non-conforming, as well as great empathy. There are a number of comparisons between being overweight and being a person who is transitioning into a gender that matches their identity: our bodies are different from the norm, we are hoping to “pass” and be seen as just one of the crowd of our peers, and our mere existence threatens the rules and codification of the gendered binary that seems to hold our heteronormative world together. We don’t fit the strict definitions of what our culture wants to be dominant, based on what we see presented in the media, which constitutes only about five percent of the world’s body types: lean, white, and fit. Not too much body hair, not too big or small of breasts, not too small of penis, not too short of neck, no rolls, no redheads, no cellulite, or flabby arms.

No five o’clock shadow on the face or five-month shadow in the armpits. For women. And men who’ve transitioned to be women. And queer people who are forced into picking a gender based on which door they walk through. And maybe the men should trim up to a certain point, too, while we’re at it. We are policing our bodies and each other’s bodies and we are suffering for it.

This idea of “passing” is something that a great number of people who fit the gender binary (women being feminine, men being masculine) adhere to and strive to stay within, something that doesn’t help those of us who are on the fringes. It’s a club whose members might both effortlessly fit into by virtue of being born with genes that fit the dominant culture, as well as those who torture themselves in order to maintain the guidelines that they see are constricting and choking, but lend order to their world and how they see it. People who are considered to be “passing” might do so at great risk to themselves and their health.

It’s a bunch of bullshit.

How is this bullshit most grossly enforced? By making people bare themselves in restrooms and locker rooms.

Take my example of being outside the norm by being overweight and expand the experience to include people who are transitioning, or have transitioned, to their authentic gender. Consider people who identify as queer and eschew gender definitions and limitations. Think about those of us who don’t want to fit into what a “woman” or a “man” are supposed to look like (and, depending on who you ask, plenty of recent versions of what “woman” represents would mean that we shouldn’t even be working out or playing sports, so kiss that Title IX goodbye). People are putting themselves at risk when they enter into such spaces where vulnerability has higher positioning than empowerment, no matter who we are or what we look like. The problem isn’t who’s going into the spaces. The problems are, simply, the spaces, first, and the expectations within them, second. This applies to both locker rooms and restrooms with both spaces having their own unique conditions and challenges to do such basic things: bodily functions and preparations.

Being a women’s, gender, and sexuality studies major, people often ask me what “gender studies” is, with good reason. Here’s a great example. If you compare the conditions of restrooms for men and women, there is a stark double-standard against men that our society has internalized and codified as acceptable. Women, apparently having more of a need and requirement for privacy (or safety if we’re talking about women naturally being the prey of men who are predators, another horrific standard that some people have internalized), have private stalls in which to use the same toilet they would at home, under the same circumstances that they would use it in the safety and privacy of where they live.

Men, on the other hand, are required and expected to use the restroom without private spaces, getting a trough or a urinal — two fixtures that had to be invented and manufactured by the plumbing industry for this purpose — and have to actually disrobe and bare the parts of themselves that we have deemed to be private in our culture. This double-standard is an incredible disconnect. We tell children that they have private parts that only they have control over; that nobody should ask to see or touch what has been deemed private. We tell them that, as they grow up, they can determine who has access to their private parts in terms of intimacy and sexuality. But then we tell boys that they don’t get to have that privacy in restrooms. That we’ve designed spaces and actually invented items to be manufactured that create restrooms in which men are required to dehumanize themselves as they publicly perform their basic, private functions multiple times a day. That, my friends, is why “gender studies” exists: to identify and call out discrimination based on gender.

As I’ve been asking the question of why haven’t we talked about the actual problems in the state of public restrooms, the fact that we require men to be treated so differently than women, plenty of men have expressed that they are not supportive of this double-standard. We should address this problem as one that is actual, rather than one that has been invented for an election year.

Really, consider recent history of what’s happened when legislators have tried to curtail the rights of members of this community in terms of marriage legislation. The community rejected that proposed discriminatory legislation and went so far as to push and secure those rights as law. In the case of transgender rights and who’s allowed in which private spaces, what are the possible outcomes here? First of all, people are definitely waking up to the fact that such proposed legislation scares a large number of people who will now be propelled to the ballot boxes on Election Day; a ruse that needs to be called out as often as possible. By making transgender people into something they’re not, whether they be framed as predators or oddities or new-fangled fads, they have been turned into a political strategy; invented as a new monster in this current wave of propaganda.

This concocted threat of transgender people requiring legislation to keep them out of restrooms and locker rooms of their chosen gender needs to be shot down as a non-issue. In reality, we need to protect our transgender friends, family members, and people we’ve never even met from the people who want to restrict their rights and actually make them less safe, less human. Second, an outcome could actually be a push for restroom and locker room reform. You want safe and secure private spaces in restrooms? We need to expand that to include everyone, which means that this culture needs to stop discriminating against men. How realistic is it to say that a next step could be the redesign and reconstruction of all restrooms to have private spaces for toilets, removing the exposed urinals and troughs? Well, it’d be a great expense, but it wouldn’t be actually inventing devices for a problem that didn’t exist, like was done with urinals and troughs. And, in a crass way, it’d create jobs for such reform. Do I think it’s a realistic outcome? I don’t know. But my gender studies heart says it’d be a correct and just outcome.

No matter what the outcomes may possibly be, as with the fight for marriage equality, this is where we need to find empathy. I don’t offer up my stories of woe about being overweight in a locker room in order to compare and determine who’s suffered more, I offer them as a means of indicating that I can empathize with being an outsider. And I can empathize with having to do certain things to try to conform to at least some of the standards of “femininity” that people who are transitioning to being female have to now consider, thanks to the gender binary. And I can empathize with men who are being forced to do something private in a dehumanizing and public way, because I see it now and have named it. And I am sorry that these are our conditions.

We do not have to accept them. But, before we revolutionize the restrooms and locker rooms of the world, we should first band together to fight the people who want to make the conditions in such places even worse, even tighter, even more restricted and dehumanizing. Please find how you can also empathize with the people who actually are at risk: those who are forced or expected to conform to conditions that they don’t find acceptable, whether they be men using restrooms without privacy, people who don’t look like they “belong” in a locker room, and people who don’t conform to their original gender at birth.

Be vigilant, respectful, and protective of each other.

With you and with love,
Andy