From the Editor: Out & About 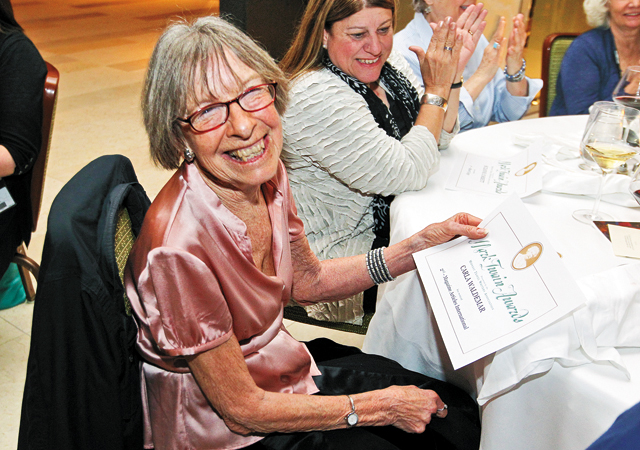 Lavender is celebrating our second Lav.fash™ issue as well as providing pages full of summer getaways for you to consider. How they fit together is open for interpretation, but when you ponder what you’d like to wear around town or on your getaways look to the Lav.fash™ pages for inspiration thanks to Justin Jones and Brandon McCray who are pictured on our cover.

Occasionally we get letters here at Lavender. When we do and it’s reasonable feedback, I like to give it some attention. Rather than write a piece myself, I’d rather highlight two topics that are very germane to this Summer Getaways Issue.

First, this Letter to the Editor was sent just after our Spring 2014 Wedding Issue. It has been edited for length and the visual aids were removed:

We are writing in response to an ad in the Lavender Spring 2014 Wedding Issue on page 58:

For an EXTRAORDINARY journey of romance.”

It is with such shock and dismay that we write! It is shocking that Lavender staff would place this ad at a time when atrocious infringements on GLBT rights in many African countries have been recently covered in mainstream news. Dozens of gay and lesbian African citizens are behind bars in Africa, awaiting trial on sodomy charges or already convicted under anti-gay legislation that, according to Amnesty International, exists in 38 African countries!

In Nigeria, the president’s move prompted a flurry of arrests, as well as riots outside a court where Africa’s GLBT community face trial for engaging in gay sex. In Uganda, activists worry that the law, and the president’s accompanying speech branding homosexuality “disgusting,” will incite homophobic attacks!

What this means for any same sex couple who travel to Africa, is that, depending to which country they travel, a gay couple caught kissing can be locked up for life, or more likely, beaten to death! So can someone found to have touched another person “with the intention of committing the act of homosexuality.” Rights groups found guilty of supporting homosexuality can be shut down and their directors jailed for up to seven years, or even worse, beaten or killed by people in the African community who are homophobic!

To post an ad like this one, proposing that Africa is a “romantic getaway” for a same sex couples is an endangerment to the GLBT community that you claim to service!

As a lesbian couple planning to marry next year we would never consider Africa as a place to celebrate our LOVE in a romantic fashion nor recommend Africa as a place for any same sex married couple to travel to for a romantic getaway! We would warn them not to go! Considering the intense hatred being advocated by the political leaders of Africa, and the laws they are enacting to support this hatred, homosexuality, in Africa, is viewed as one of the greatest supposed threats facing the continent: a root of all social, economic, and political ills!

Considering the well-publicized news on anti-homosexuality climate that currently exists in Africa, why would a well known gay magazine, such as Lavender, publish an ad recommending Africa as a safe place for a same sex couple to celebrate their love and romance?

We hope never to see this ad in future issues of Lavender magazine.

I want to thank Angela and Sharon for writing this letter. It’s valid and worth everyone’s time to consider. It was thoughtful and courteous and shows that there is a great need for the community to be critical of its choices. To the point of allowing an ad in an issue, it was a good ad, attractive and truthful, as argumentative as any of them, really. From an editorial standpoint, Lavender gives the readers information and power to make decisions. We present various ideas in various ways, and ultimately leave the decisions to each reader. John Townsend has written about problems in Uganda in the magazine for years. If you follow us online, especially via Big Gay News, we regularly report atrocities happening in different countries in Africa. But, as a counterpoint, we also know that Africa’s a large continent, and that GLBT people travel there with relative ease and safety. As with anywhere, we all need to enter a territory knowing what we might expect. And that is why we need to call travel agencies such as the one that placed this ad, to talk about circumstances in other countries and safety options. I’m sure those agencies would not recommend that anyone visit the nations where it would be unsafe to do so. But that, ultimately, is up to each person. You’ve made your choice and I don’t disagree with it. But, there are places in the United States that aren’t comfortable for travel, either, for some of us, and where same-sex couples probably shouldn’t kiss in public, either. (Not to the point of being arrested, but still not safe.) Sad but true.

What we do with our travel articles in this magazine is tell you our stories as we try to objectively experience different regions and countries. We vouch for a locale when we include it in our pieces, with the understanding that everyone experiences things differently. But, if we are credible to you, our stories can be good references for your own travel.

I’m pleased to announce that our primary travel writer, Carla Waldemar, has been recognized with two writing awards for pieces published in Lavender. The Midwest Travel Writers Association, a talent pool of breadth and depth, gave 2nd Place honors to two of Carla’s articles, one about Norway (in the international category) and one about Kansas City (in the Midwest sites category). Congratulations and thanks go to Carla for continuing to write for Lavender as well as a number of other outlets. We are fortunate to have someone of her caliber informing us about travel locales near and far.

Thank you for reading…and thank you for being critical of what is presented to you. How we all learn and develop is often through each other.

With thanks and wanderlust,