From the Editor: Summer Lovin’

We’ve been having busy times around here: Marriage, SCOTUS, Pride, and now Pets. So much catching up to do.

First, thank you for picking up the Pride Issue in June. From all reports, that thing flew off the newsstands. We ran out of copies here at the office and had to hope that we’d be getting our grubby hands on a few of them…which we did. Phew. This popularity told me a couple different things; print publishing isn’t dead and we needed a celebratory issue. There was no spectre of negativity looming. We had a little breathing room. We could tend to our fatigue. And then we could celebrate. Believe me, putting together the marriage coverage in the Pride Issue was therapeutic–it wasn’t done with any second-thoughts or doubts, it was done with respect, reverence, and happiness. Showing some unsung heroes, talking about how shocking it might be to suddenly have rights, featuring couples in wedding scenarios that can finally be “Happily Ever After” in marriage if they choose…all of these pieces looked toward a positive future based on years of hard work and resolve.

Next, I’d like to hear more from you. What are you thoughts and reflections about the recent developments? Minnesota passed marriage equality. The Supreme Court of the United States found Section 3 of the Defense of Marriage Act unconstitutional (Section 2 still exists; see E.B. Boatner’s “Edgewise” column). Californians are able to marry again thanks to the Supreme Court not upholding Prop 8. People are getting engaged and applying for marriage licenses. Where are you in this? What are you thinking? Let me know at [email protected]. I’ll collect thoughts and perhaps publish them as is, or use them to build a longer written piece; it’s time to start documenting the next stage in this community’s history.

As far as what’s coming up in the next issues of Lavender, we’ve got our Pride in Pictures Issue coming out in two weeks. Last year, I suspended all regular columns and content to give the community a commemorative issue of Pride photography to celebrate the 40th year of Twin Cities Pride. It was received so well that we’re doing it again this year. All photos, all Pride, all you.

Also, as we get closer to August 1 and the start of the new perpetual wedding season, we’ll be out there documenting what’s going on in the community. We’ll publish pieces that talk about how marriage will affect you and your families, particularly as we learn more about life after DOMA. We’ll keep a growing body of resources online so you’ll be able to refer back to them as we keep moving forward.

And move forward we will.

I’m grateful for our journey and our celebrations together. I look forward to continuing to document this historic time for this community. 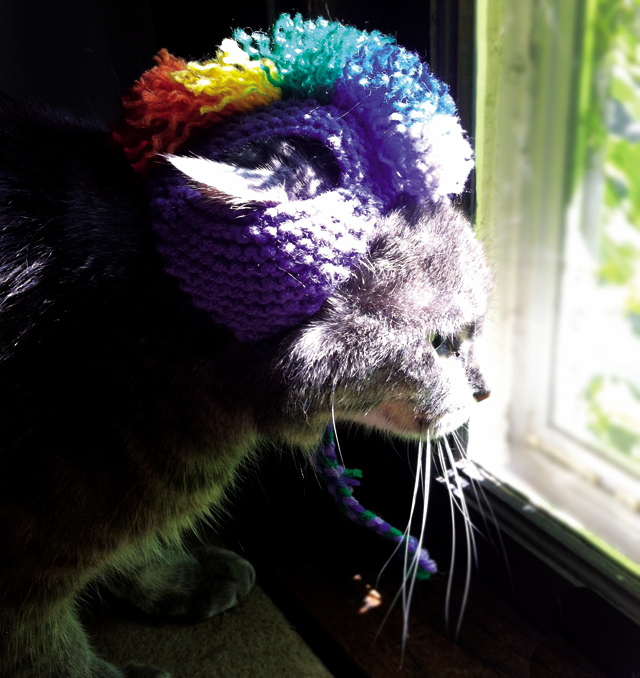 As an aside, I had a funny exchange on Twitter when our last Pet Issue came out with all dogs in it. The question was why weren’t there any cats in it? I responded that we’d switch on and off with dogs in one then cats in the next…blah, blah, blah. Another tweeter very astutely laughed and noted that we’re able to cover G and L and B and T in each issue but not both cats and dogs? Too true, dear reader. Too true. So, we have cats and dogs and even a bird in this Pet Issue. I’ll focus on integration over separation from now on. Can’t we all just get along? And, as an additional treat, please turn your attention to our friend, Fame, who now sports a knit rainbow mohawk hat that was featured in the Pets section of our Pride Issue. Fame’s human, Jordan Roberge, not only got online and purchased the last one available but also sent me a picture of dear Fame wearing it. A cat in a knit rainbow mohawk hat. Some days, it just doesn’t get much better than this.