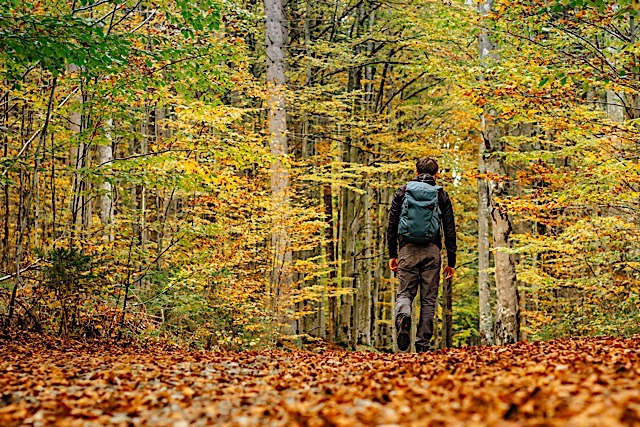 Fall is a period of self-reflection.

This time of year, I try to get into the woods as often as possible. These are little getaways—from the city, from the self. In the woods, I’m totally present. I listen, rather than get distracted.

I remember autumns of my childhood, flashes of tangential light and form. Very little dialogue. Grandpa’s colorless eyes that quivered like sea slime, his stooped shack in the Upper Peninsula ghost town of Pequaming. The black flies were surreal, a weather system unto themselves. The spit of bacon on the wood-burning stove. Grandma’s perfume with its chemical smart. I’d watch grandpa, the diaphanous hollows of his face, a wilted woodsman in heavy flannel. Mom, a silent shadow in the periphery, her angles caught by firelight and pulsing upon the hand-hewn wall. I’d run along the beach with Prince, my beloved Siberian husky, listening to the lake, feeling, briefly, the unblemished freedom of childhood, feeling the presence of some readymade God watching the world like a reflection passing over water.

I revisited this place recently, now in ruins. I pressed my hand to a jackpine’s bark; one can’t help but think of trees in the U.P.—they take up most of that region’s 16,377 square miles (and in the fall it’s some of the greatest leaf peeping on earth). Ironwood, butternut, honeylocust. Five species of pine, seven maple. From roadside swamps, wasted tamarack jut like fishbone among the cattails.

I try to experience their essence, their cosmic spirit. This is not a jackpine. It’s not even a tree. It is a wild thing older than man that man decided to call tree. I feel its warmth, its thumbprint texture, and imagine the hundreds of gallons of water traveling up the ancient straw of its trunk.

When I get into the woods, I walk around, look. My shadow moves across the trail like spilled water. I am not my body, nor the functions of its bundled plumbing. I am a vessel of consciousness hardwired with an ego, a 200-pound (give or take) unit of stardust. I am merely an echo of an echo of my homeland, a sliver of the Upper Peninsula that has shed and drifted. We are all waves on the Big Lake, breaking. And if I look the right way, I don’t see trees at all, but nameless things predating taxonomy and transcending language. I want to see everything this way. But first, I want to look at trees as living things, generous as gods, bending to our whims and asking for nothing in return, a gathering of strange and beautiful creatures, raising their limbs in exultation.

It’s fall. Get away.