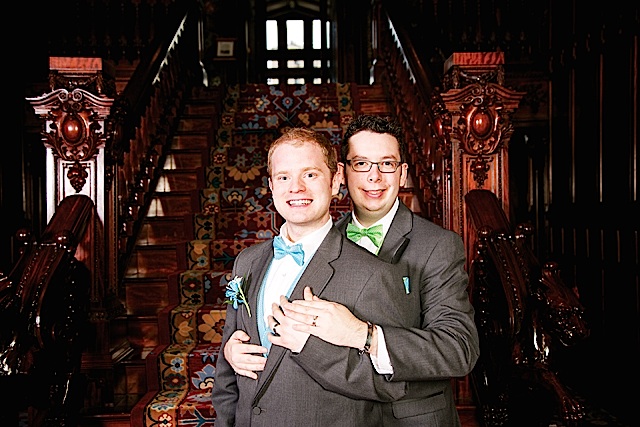 People become politically involved for various reasons … finding a significant other is likely not one of them. But that’s exactly what happened for Justin and Kevin Jagoe.

When answering the question, How did you meet?, Kevin’s short answer is: “Through queer organizing on college campuses… and drinking at The Saloon.” The long answer: when the two were in college (Kevin as a senior at Hamline University and Justin as a junior at the University of Minnesota), they met through a mutual friend, Alfonso Wenker, who ended up being Kevin’s best man. Kevin had gotten to know Alfonso through working across various Twin Cities private colleges to coordinate GLBTQ programming.

Kevin says, “I went to The Saloon on a Thursday night — May 5, 2007 (Justin interrupts: ‘It was April 5!’) — intent on dancing and spending time with Hamline friends. I ran into Alfonso and his group of U of M friends. At some point in the evening, Alfonso literally pushed the two of us together to dance and that was how we met.”

Justin is quick to add, “It doesn’t sound terribly romantic to say we met at a bar, does it? But the truth is that we had a really immediate connection.” In the week or so following the night that Alfonso pushed them together, Justin can’t think of a single day they didn’t see each other. “We just kept being with each other, spending time together, going out together, staying in together. What I love about our story is how gradually it grew into something so wonderful. Kevin went in my mind from being this really fun guy to being somebody I suddenly realized I was in love with, to being the person I needed in my life.” 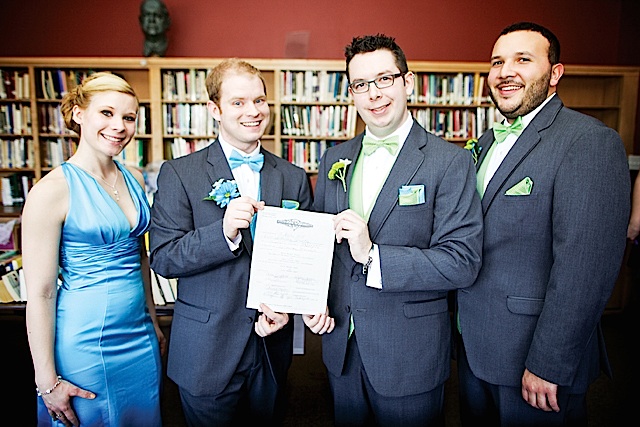 Kevin must have felt the same way, because five years later, they found themselves in New York City as part of their anniversary weekend. Kevin proposed to Justin on a bluff overlooking Harlem Meer, a lake in Central Park, before spending the rest of the week around Manhattan, visiting restaurants and taking in Wicked on Broadway.

“It wasn’t his first choice to propose to me there,” Justin shares. “We spent half our trek around Central Park looking for a particular flower garden that Google Maps assured him would be there. A few times I asked if we could be done walking, but Kevin was strangely adamant about finding it. We never did find that garden, but I have a hard time thinking it could be better than being proposed to while overlooking Harlem Meer.”

When it came time to plan the wedding, the couple formed a committee with the two of them and Justin’s sister and cousin, who had both planned weddings with family members before. Their friends, Alfonso and Ryan Kroenig (who is the owner and principal of Events by Lady K), also have been a part of event planning for a number of years, so the couple had a lot of resources at their disposal.

Incidentally, the committee began planning precisely 400 days before the wedding — a complete coincidence, but an interesting one nonetheless. “We actually took minutes, defined roles, volunteered to undertake tasks, maintained guest databases, and corresponded via email between meetings,” Justin says. “In retrospect, all the over-organizing was a good call; very little, if anything, got missed, and there were no real blow-ups or altercations or misunderstandings or hurt feelings in the planning process. It really worked out swell!” 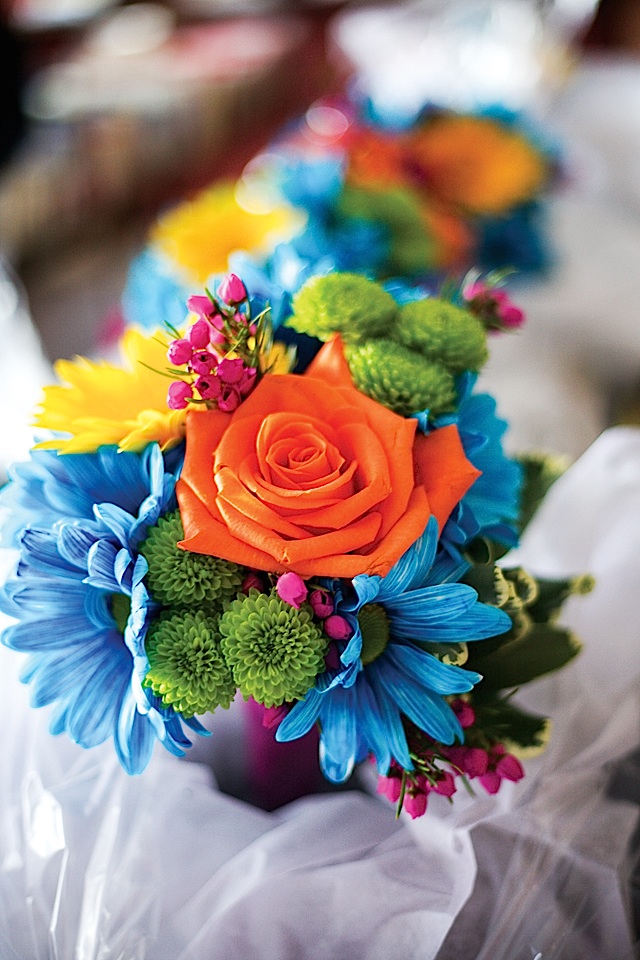 That level of involvement was natural for the committee, made up of multiple event planners. Ryan was part of the entire planning process in the most literal sense: he went along with Kevin when he went engagement ring shopping to propose to Justin. “They are two of my best friends, and I was honored to be not only their wedding planner, but part of Kevin’s wedding party,” Ryan says.

Beyond that, he even assisted with venue selection for their reception (identifying potential locations, setting up tours, and being the on-site contact the day of the wedding), was part of the menu planning and tasting process, created the flow of the day, and ensured all the details were taken care of. There’s more: he assisted with vendor selection for décor, such as uplighting and linen rentals, registry website to support their Paris honeymoon, and designed and provided the centerpieces.

And what an event it was! Kevin has been doing marketing and branding for organizations for a number of years, so he took the lead in creating the color palette, logo, typography, etc. “Justin definitely had input along the way but really we had a similar aesthetic for the wedding and there wasn’t a whole lot of need to give and take throughout the planning process,” Kevin says. “We wanted things to have a clean, modern look, using bright colors that helped convey a sense of fun for our day.”

To which Justin responds, “Kevin’s being way too charitable in his assessment of my input. The truth is that I am NOT much of an aesthete or stylist. At least, I knew I wouldn’t have nearly as strong of opinions on the colors, logos, or typography of the ceremony as he would. I actually think I left Kevin completely beside himself one evening when he asked for my opinions on colors, and I more or less said ‘I dunno… blue’s nice, I guess.’” 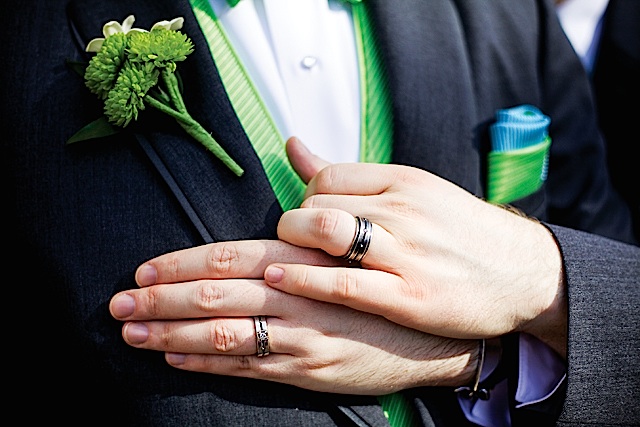 But of course, Justin completely trusted Kevin’s sense of style, and completely trusted the rest of the committee to say what worked and what didn’t. As far as his own original contributions to the ceremony, Justin confesses he’s a bit of a movie geek, and Kevin was kind enough to let him figure out the musical selections (mostly, they were music pieces from the scores of movies he enjoys, like the Studio Ghibli animated films, a piece from the Pixar movie Up, and one piece by Dvorak that Justin absolutely adores.

According to Ryan, the aesthetic was very “Modern Geek Chic,” very sleek and consistent. It was based on the logo Kevin designed that appeared on everything from their save-the-date to the day-of programs. They even created a hashtag, #JKSpecialDay, like the social-media-savvy millennials they are.

“I had a very strong idea that we carry our branding through from the engagement party to the honeymoon,” Kevin says. “I’ve always enjoyed brand consistency and doing this sort of work so being able to bring that to our celebration meant a lot to me. Once we chose our color palette and fonts, I created a logo and we built the rest of the wedding materials from there.”

Ryan says, “The bright color scheme of aqua and lime green influenced the pops of color that were prominent but not over-the-top.” Each man had a color for the wedding (Justin’s was that aqua Ryan was talking about and Kevin’s was lime green) that was carried through each side of the wedding party as well as their individual clothing and boutonnieres. They also had custom shoes done for all of the guys in the wedding party to help make the guys’ clothes more interesting. 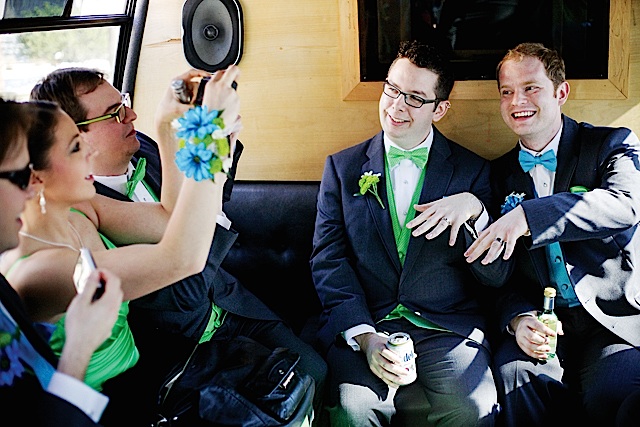 The pops of color worked beautifully, from the traditional appearance of colors throughout the wedding party in dresses, suit accents, and flowers, to the trendy details with contrasting color custom-Converse shoes. The colors were carried throughout the reception venue in alternating uplighting along the walls, napkins at each place setting, and centerpieces of candles. Each of them had one special and personal touch they wanted as part of the celebration: Kevin’s love of penguins, which appeared in the cake topper, and Justin’s love of Star Wars, which he used to created table signs denoted by references from the movies.

It’s clear that the men worked hard to make the ceremony reflect each person individually as well as part of a couple. Their choice in ceremony venue (First Unitarian Society of Minneapolis) and officiant (Rev. Dr. David Breeden) helped bring in their Humanist values, while their reception venue (American Swedish Institute) allowed the nearly 200 guests space to celebrate.

“It was important to both of us to have our ceremony reflect our deeply held beliefs and values,” Kevin says. “We didn’t want to use clergy from the religions of either of our childhoods and we wanted something other than a strictly secular ceremony.”

For now, the couple is focusing on their advanced degrees. Kevin is on track to earn his masters in nonprofit management from Hamline this spring. Once that happens, he will be studying to enter the seminary to become a Unitarian Universalist/Humanist minister. He’ll have to take on an internship someplace — which means, possibly, they’ll be heading out of state, but it’ll be a great adventure.

As for Justin, he’s got about a semester and a half before work begins on his thesis for his MFA in writing (also at Hamline) with a focus in creative nonfiction. Fortunately, he is able to work on his thesis remotely if needed.

“If we end up moving for Kevin’s internship, I’ll have something to do while he becomes a minister,” Justin says. “And who knows after that! Maybe a family? We’ve talked about it, but we’ve not yet talked about it enough.” 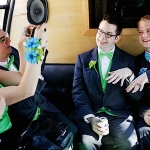 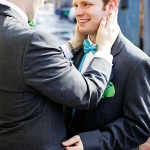 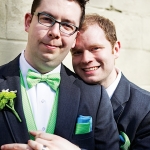 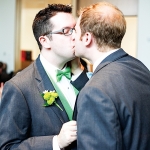 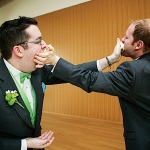 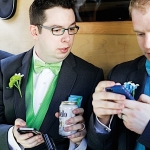 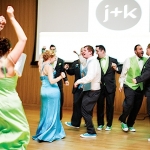 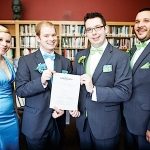 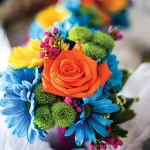 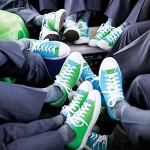 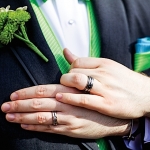 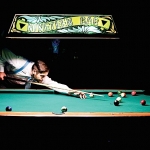 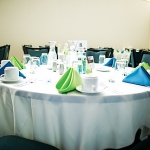 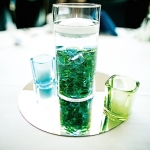 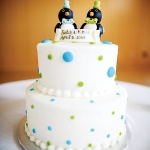 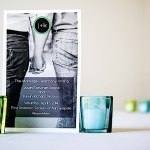 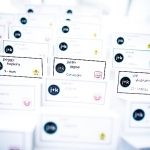 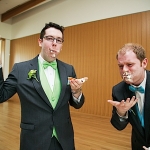