Cats believe they are superior beings. How sure are we that they’re not? Cats need people because they have no cash, no credit cards, no smart phones, and no can openers. People need cats because we’re not naturally warm and furry.

In 1997, a small group of people founded Feline Rescue, stating the mission “to provide safe shelter, veterinary care, and socialization for stray, abandoned, or abused cats until good permanent homes can be found for them.” Today, Feline Rescue assists over 500 cats per year in finding homes, has two buildings on Fairview Avenue in Saint Paul, and three programs for cats: an adoption center and shelter, foster care, and community outreach. 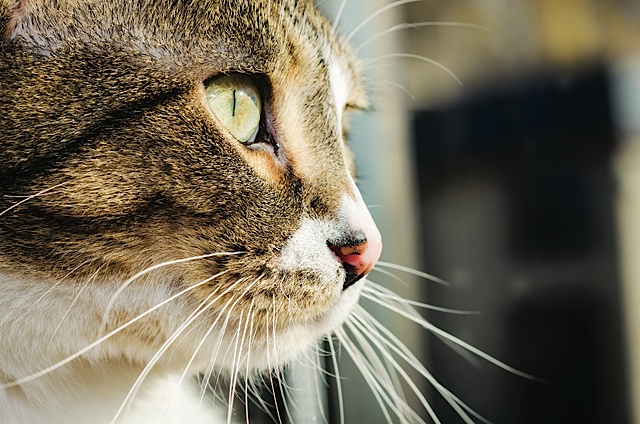 Feline Rescue is no-kill. If you’re a cat and you need food and shelter, you may live out your life at the adoption shelter or in a foster home. Cats live at Feline Rescue, even if they’re surly, rude, and/or have unacceptable habits like spraying walls.

Volunteers do Feline Rescue’s work, from cleaning litter boxes and mopping floors to accounting, marketing, and legal matters. It has one part-time employee who manages the facilities; he supervises contractors for plumbing, heating and cooling issues, and electrical work and also wields a mean hammer, building walls and shelves for Feline Rescue’s climbing and observing guests.

Cats have different values and priorities than people. People value keeping the drapes and walls clean and in one piece. Cats value being up high and peering down. Cats also, just like people, sometimes make bad decisions. Just after Christmas, “Rooftop Andy” made a bad decision. 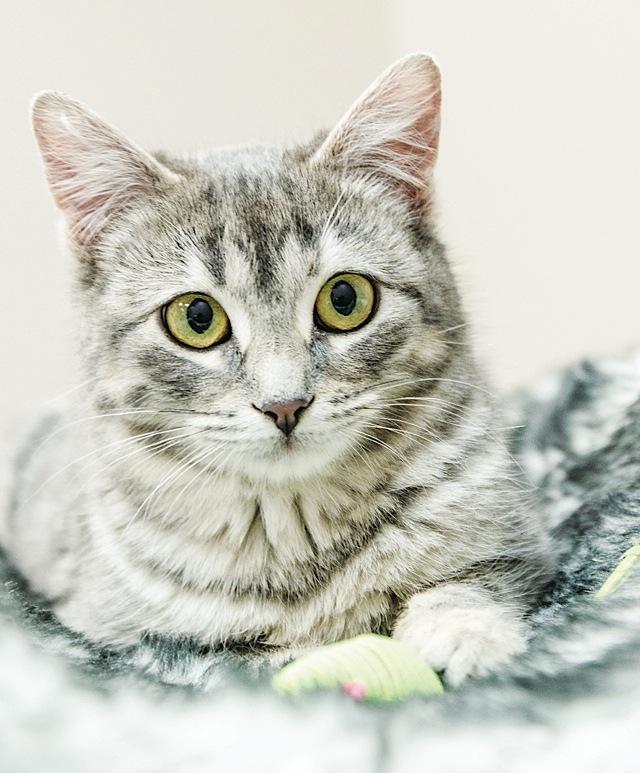 A semi-feral cat in north Minneapolis, Andy, pursuing height, got himself stuck on a two-story roof. He yowled and called to the people next door who had been bringing food to him and his comrades. Andy did not value staying up high in cold January weather without food. His human benefactors called Vickie, leader of Feline Rescue’s outreach team. On New Year’s Eve, she went to the scene of Andy’s decision with a live trap and some cat goodies. Andy’s good neighbor held the ladder for her, and up she went.

It took Andy several hours to decide to venture into the trap. Once he did, Vickie retrieved him, took him back to Feline Rescue, and arranged for MnSNAP (Minnesota Spay Neuter Assistance Program) to fix Andy up so he wouldn’t father several generations of Andy Juniors.

Andy’s friends wrote to Feline Rescue, “We spent the rest of the day actually crying from happiness, and I still smile every time I even think about it. It really seemed no one cared, and this poor cat was going to die because of poor judgment. Vickie changed that, saving the cat’s life and bringing the sun back to ours.” 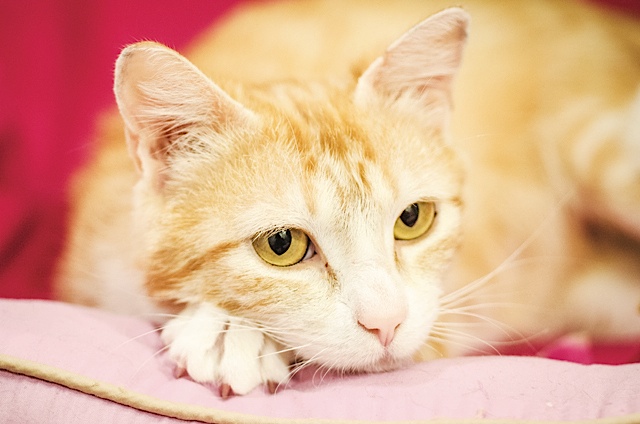 The people of Feline Rescue care for and love cats. Above all, they respect cats. A board member wrote, “We see humans and cats as two wonderful species sharing one planet. We know cats became friends with humans when humans began storing grains that attracted rodents. Cats knew what rodents were: dinner. Cats ate dinner and protected the humans’ grain. Soon, people protected the cats. As the T-shirt says, ‘Cats were once worshipped as gods. They have never forgotten.’ We rescue cats mostly from things other people do. We hope we help sustain universal order when we rescue a cat.”

Feline Rescue’s foster program, in which cats live in private homes, specializes in cat moms and kittens. People find a pregnant cat or mom cat with babies in their yards or on the streets. Feline Rescue finds the mom a home in which to safely raise her children. For example, the adoption center currently has Olivia Benson. People found Olivia and her babies living under a pool cover. They went to a foster home. When the babies were ready to leave Mom, they were quickly adopted. Mom Olivia has come to the center to find her own “forever people.” (She’s pretty cute and quite the lady.)

Feline Rescue’s adoption center doesn’t look like much when one drives by. But new board member Chuck Sencer calls it “the Ritz-Carlton for cats.” Why? Because the cats are actually happy. And, they’re free-range. Most of them roam freely in several suites and play with other cats and with toys. They sit in windows and watch you drive by, not in kennels, although a few are confined because “they don’t play well with others.” (Other cats, not people!) Humans notice that the center seldom smells of “cat”, thanks to twice-daily teams of volunteers who clean boxes and feed the guests. 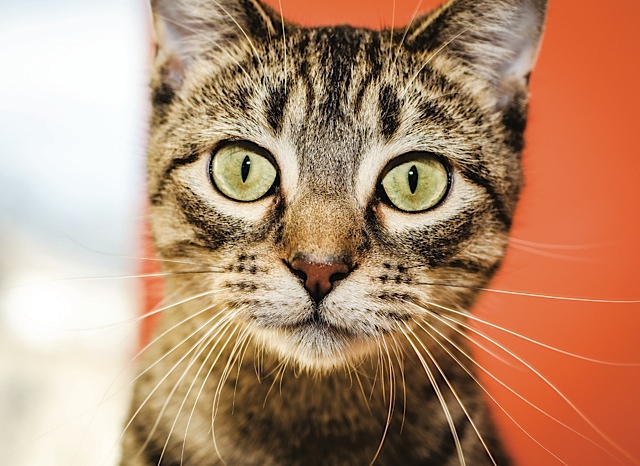 Feline Rescue is original. Its festival banner reads, “We Speak Cat.” Vickie, who climbed the ladder on New Year’s Eve, noted that Feline Rescue does it all, “With our trifold organization, we reach the tame and not so tame, the young ones and the old ones, and the ones in between, we work with all areas when it comes to cats.”

The bulletin board at the center tells stories. “Teddy, formerly Rossi, is doing well and really seems to be very happy here with us! We decided to name him Teddy because he is so soft and fluffy and so cuddly … he reminded us of a teddy bear! Thank you for all you do for homeless cats! We will be sure to refer anyone we know who is looking to give a nice home to a cat or kitten.” The board displays “thank you” letters from the City of St. Paul’s animal control director and the Anoka Police Department.

Feline Rescue’s people first work with cats. They work equally with people and other organizations. Where do Feline Rescue’s guests come from? The case files tell all: animal control, community waiting lists, stray, abandoned when people moved, found in a foreclosed house. People across the metro area call Feline Rescue when they find a cat in trouble. 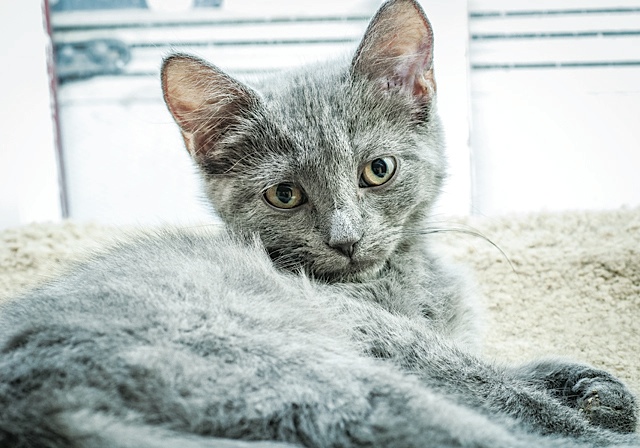 Feline Rescue engages actively with neighborhoods and other organizations. For the last two years, volunteers have started conversations in neighborhoods where they’ve been invited and distributed informational door hangers. Feline Rescue works in areas where cats, both stray and feral, have congregated and multiplied. It works with MN Spay-Neuter Assistance Program to identify cats needing their services and provides funds for both individual surgeries and basic vaccinations. Recently, Feline Rescue began working with Animal Humane Society in its grant-funded spay and neuter program in St. Paul’s Frogtown area.

Feline Rescue’s people attend many community events to educate and build awareness. They seek visibility so that cats are visible. They participate in pet events and community fairs, such as Twin Cities Jazz Festival, Pride Festival, and the Renaissance Fest. Feline Rescue was also one of three organizations with booths at the first annual Internet Cat Video Festival held at Walker Art Center.

How might a person adopt a Feline Rescue cat? Previous adopters suggest that “you go to the adoption center, walk in, sit down on any of the available chairs, and wait for a cat to adopt you. Because one will.” Current guest Paolo, very black and shiny, says, “Yo! I’m in here! In this room! I see you! Come see me! I’m young, black, a guy, and totally friendly. Come in! Come in! I like nothing more, except maybe dinner, than interacting with people. They’re cute and charming. Come in! Come in!” 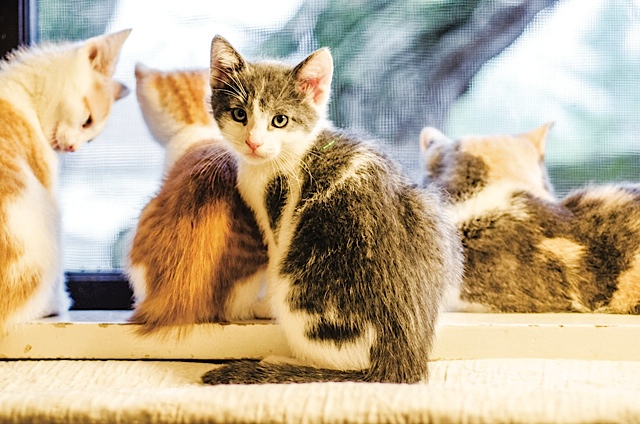