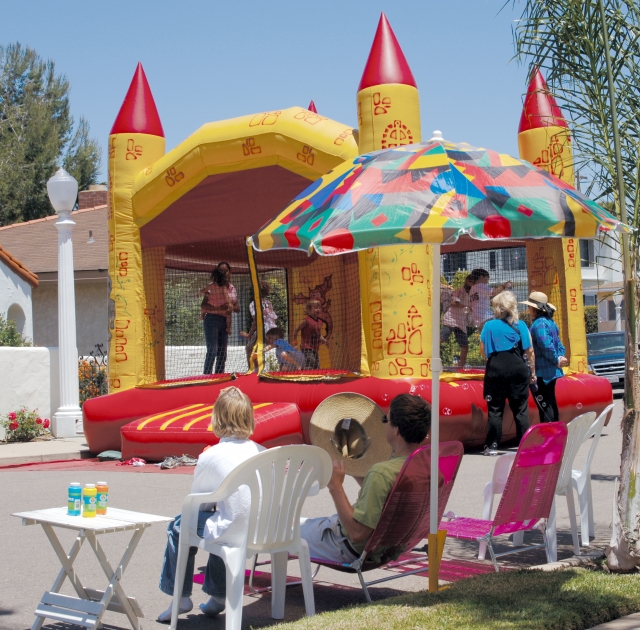 (In our first episode, my spouse and I were belatedly invited to our neighborhood block party. We suspected that homophobia was at the root of the delayed invite. But, in actuality, it was because our neighbors are terribly disorganized.)

We live in an urban suburb that’s just the right mix of fancy-bohemia to be home to people who are one-step removed from artistic fame. For example, one of our neighbors is Gilda Radner’s niece. That’s how she introduces herself. “Hi! I’m Gilda Radner’s niece!” And she offers the designation as explanation of why she sometimes gets special treatment. Last fall, when parents were anxiously awaiting to hear if their kids had been accepted into top-tier colleges, she was the first to receive word that her daughter had been accepted into an Ivy League college. “Oh, it’s just because I’m Gilda Radner’s niece. I always get everything first,” she said soothingly to other anxious moms.

My spouse and I love Gilda Radner’s niece. We’re not so crazy about other semi-celebrities who live nearby. The villains behind the great Block Party War of 2019, in fact, are the progeny of names you’d recognize. One woman, the daughter of a one-hit wonder novelist who hit it big after his book was made into a Hollywood epic and then deserted his family, and her pal, a direct descendant of a famous architect known for his prairie style and ruthless disposition, joined forces to deliberately undermine the success of our block party.

These two women live on our street, but in the block adjacent to ours. We live in the 1400 block, and they in the 1300 block. This will become very important as the story unfolds.

Shortly after we got an invitation to our block party—“The first ever in the history of this block!” the invitation breathlessly exclaimed—we received a solicitation for a donation for a bouncy castle to be erected on the day of the party. The note asked that we slip $20 into the mailbox of a home in the 1300 block.

At this point in the story, dear readers, I must note that I didn’t put a lot of critical thought into what I did next. This lack of “thinking” and “logic” would be used against me as evidence of my “stupidity” later on. What I did was walk to the middle of the 1300 block, drop $20 in the appointed mailbox, and then went about my day with no sense that I had just been suckered into consorting with the enemy.

Later that day, our bell rang and I found three members of the 1400 block party committee standing on our porch. They looked angry. One of them was carrying a clipboard and tapping it violently with a pen.

“We’re not here to accuse you of anything,” one of the women said by way of introduction. “We just need to know whose bouncy house you’re supporting.”

“We know you gave money to their bouncy house!” spat the woman with the clipboard.

“The 1300 block!” the clipboard lady said. “Once they found out we’re having a block party, they moved up their own party to compete with ours.”

My spouse was now standing next to me. She immediately sided with the block party ladies. “What’s the matter with you?”

I explained that I didn’t realize there were multiple parties and bouncy houses. “Can I just give you money to rent our own bouncy castle?”

“They’re getting a castle?!” the committee members exclaimed in unison.

(In our next episode, it’s block party day! Competing castles are erected and unexpected alliances are forged.)