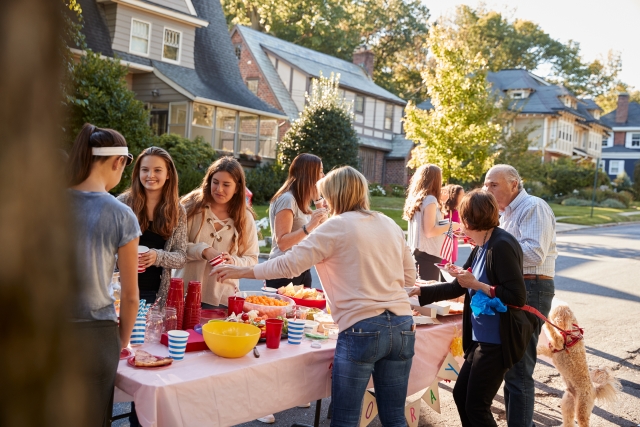 The invitation to the block party came late at night. I woke one morning to find it slipped under our door.

“I guess we’re finally going to meet our neighbors,” I told my spouse as I handed her the invite.

We bought our house three years ago and have had almost no contact with the adults on our block. Most of the other residents are young couples with kids. We’ve peeked out our front window like jealous maiden aunts watching these families gather in each others’ yards for barbecues and movie nights, where they project Disney films on an outdoor screen.

We invited one childless middle-aged couple over for drinks last summer. They brought their dog, who promptly attacked one of our dogs, ending the evening before we could uncork the wine. Now we just wave to each other from our gardens.

A surly and spectacularly unfriendly lesbian couple rents the house next door. They refuse to acknowledge us when we say hello. Recently, they insisted the city install a handicapped parking spot in front of their home, in spite of the fact that neither seems to have a disability other than a terrible attitude. They leave angry, hand-scrawled notes in red Sharpie on the window of any car parked within 20 feet of their parking space. I’ve suggested to my spouse that we curate a collection of these notes for an exhibit titled: “The Art of Using Multiple Exclamation Points As A Weapon.”

The little kids in the neighborhood have served as their parents’ ambassadors. They peddle over on their bikes and share their small dramas as we work in the garden. One kindergartener marches up our steps almost daily, demands a popsicle (which we keep just for her), and settles in to report her daily grievances, which largely have to do with the favored treatment received by her older sister.

It was this little girl who first told us of the block party, a day before we received an invitation. As she was completing her daily visit, she jumped on her trike, and shouted, “Make those cookies with the sprinkles that I like for the block party.”

My spouse and I stewed all evening over the news. We understood why we weren’t included in the movie nights. Our kids are in high school and college, so we wouldn’t be the prime audience for an outdoor showing of The Little Mermaid. But not invited to a block party?

Could it be homophobia? Were we being wrongly affiliated with the angry lesbians next door or the other lesbian on the block, an older woman whose wardrobe consists exclusively of Chicago Cubs jerseys?

We met the Cubs Fan—as we call her because she is exactly the type of person whose name you can never remember—at a neighboring block party the year before. She spent the day planted at the kids’ table, hiding from interaction with adults.

My spouse insisted we force a conversation on her even after I warned her it was a bad idea. The woman shrunk into herself like a scared turtle when we approached her. Then, in a fit of social panic, blurted out all of the intimate details of her lonely existence in a breathless monologue: the dastardly siblings scheming to steal her parents’ meager estate; the woman she’s pined over for 40 years who doesn’t know she exists; the ungrateful pets that skiddaddle, never to return, the moment they find an open door.

The following morning, when we discovered the invitation to the block party under our door, my spouse shook it in the air and declared: “This is our chance to show our neighbors that we’re the cool lesbians!”

I sank into the couch and sighed in anticipated weariness. This was going to be a lot of work.

(Stay tuned for the next episode where we are recruited to rent a bouncy house, and a rival block party threatens attendance at our party!)