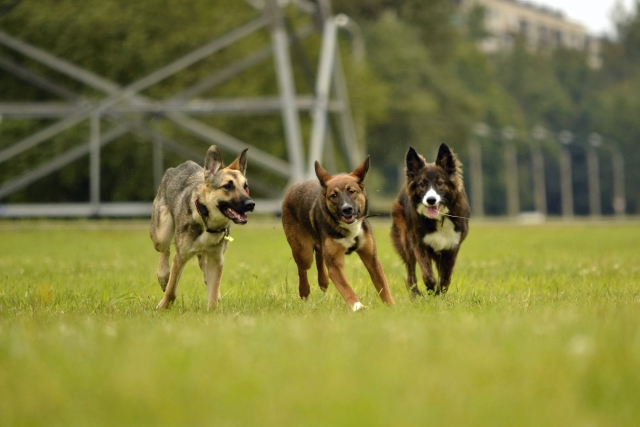 We leave for the park at 7 a.m. We used to go much earlier—between 4 and 5 a.m. Before coffee. I’d hustle my little pack out of the house and into the car.

But this was before the skunk attack of 2016. A skunk managed to spray all three dogs in one blast before we left the backyard. My screams, the dogs’ hysteria, and that smell (burning tar) woke my spouse, Christina. She is not a morning person. She had warned me repeatedly about the early morning outings disturbing her sleep. She came storming into the yard and into a thick cloud of oily stench, and I knew our pre-dawn park visits were over.

So, now we leave at 7. A marital compromise that pleases neither of us!

We arrive at the park, and all three dogs are thrilled. They never know where they’re going when I put them into the car. It’s almost always someplace fun. But it might be to the vet or to their arch-nemesis: the groomer. It’s a dice toss, and I can tell they spend a lot of time thinking about it. Because, really, what else do they have to think about? Their surprise and delight reminds me of when my parents took my two brothers and me to spend a Sunday looking at carpet. Then, on the way home, they unexpectedly turned into the parking lot of Adventureland.

I open the gate and they tear off, barking their fool heads off, looking for their friends. I have my own dog park friends. My favorite park friend is named Kat. I have spent no time thinking about the irony of having a dog friend named Kat. She is a former Navy captain who has a teenager with cystic fibrosis. She wants to retire to Florida. She’s in love with a professional wrestler. I learned all of this within the first five minutes of meeting her. I made friends with her as easily as my French bulldog, Nettie, made friends with Kat’s dog, Oreo.

But Kat is not at the park today. Instead, I see Bailey’s mom walking toward me with great purpose. I roll my eyes at my schnauzer, Livia. Livia is the most mature member of my pack and understands my middle-aged impatience for spending time with people I dislike. She shows her disdain for Bailey’s mom by refusing to curry favor with this human. Instead, she stares off into mid-distance and leans against my leg.

Bailey’s mom (I’ve never bothered to learn her name) is 15 years younger than me. She’s the type of lesbian I would have tried to win over when I was in my 20s and 30s. She’s self-important and has a stupid haircut. One of the benefits of aging is recognizing what’s worth the effort, and what’s not.

My indifference towards Bailey’s mom has, of course, attracted her to me. If only I’d known in my 20s that indifference, not pandering, is the secret to attracting jackasses. She thrusts her phone in my face and says that she’s posted a picture of my dog Nettie on her Instagram. I pull out my phone and look up her account, only to find that it’s private. She debates out loud whether to give me access. The account is just for close friends, she says—an invitation and a threat. This is the type of idiot she is. I shrug, which results in her quickly approving my access. I pointedly turn off my phone, round up the dogs, and head home.

Christina is up and bleary-eyed when we arrive home. She complains that we woke her when we left. But she’s not skunk-level angry. I open Bailey’s mom’s Instagram and we make fun of her stupid pictures.