“They say that the way to a man’s heart is through his stomach.”

First off: who’s “they”? I’d like to meet these people. Secondly: yes, absolutely true. Well, at least for me. I’m not going to speak for other men (or women, for that matter, because this logic could honestly be applied to anyone), but there is a certain je ne sais quoi to that whole saying. Why is food so intoxicating? Why does it vex us so? Food is a basic human necessity, but you never hear about anyone going all gaga and romantic about oxygen in the same way.

“And finally, monsieur et madame, we have an aged bottle of air, canned and pneumatically sealed with the utmost precision in a Grenoble village in 1965. $55 a glass.” 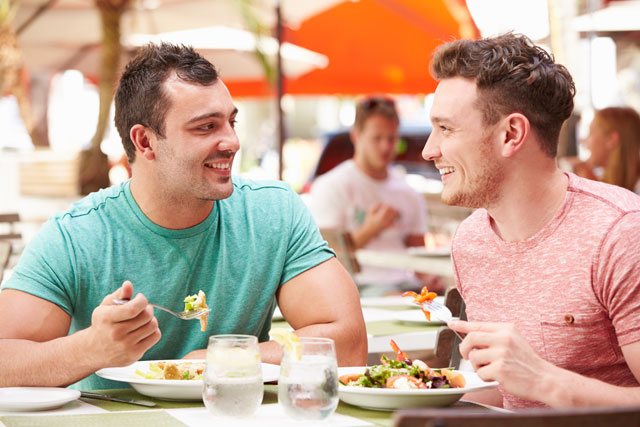 Or maybe there are people like that. It’s 2018, times change. But I digress. There’s nothing quite like a sojourn to a romantic culinary getaway, whether it’s on the French Riviera or just at the restaurant two blocks down. And it’s not just the food that makes many a memory on these excursions: the presentation, the ambiance, the restaurant itself.

But also the food. Let’s be honest. And for this edition of Lavender—the aptly named 2018 Romantic Dining issue—we’ve sought out the hottest dining hotspots in the Twin Cities to tantalize your tastebuds. From the divine New American fare of Tenant, to the 1930s delights of Bardo—which I can personally attest to bearing a dessert menu that will, for lack of more sophisticated parlance, punch you straight in the mouth with its flavor muscles—there are many cozy, sexy, and downright délicieuse destinations at your disposal.

But romantic dining isn’t all we’re offering in this issue. If you live in Minneapolis, you’re well aware that Super Bowl 52 is right around the corner, and, like any big event, the accompanying parties aren’t far behind. So if you’re hanging around town for the big game or just want to absorb the bacchanalia that surrounds it, we’ve got a handy Super Bowl What To Do guide, which includes football parties, GLBT-friendly shindigs, fan festivals, and much more.

Finally, a friendly reminder that Lavender‘s next First Thursdays happy hour event will be Thursday, February 1 at Wilde Cafe and Spirits, located right down Main Street in Northeast Minneapolis on the Mississippi. Come for the networking, stay for the great grub and delicious drinks. After all: something something heart, something something stomach. Allons-y!

Yes, I took French in college, could you tell?