Downtown Dogs: A Pup’s Home Away From Home

Ralph Bernstein was a banker. He came to Minnesota in 1996 to work for a big company and, by the time he left, he was running a multimillion dollar business for them.

“I had a pretty good and pretty typical life,” he says. “I had a wife and two children, a house in the suburbs, two cars, friends, golf clubs, dog, etc. I was good at my job, and the company was happy to pay me pretty well, so off I went to work every day.” 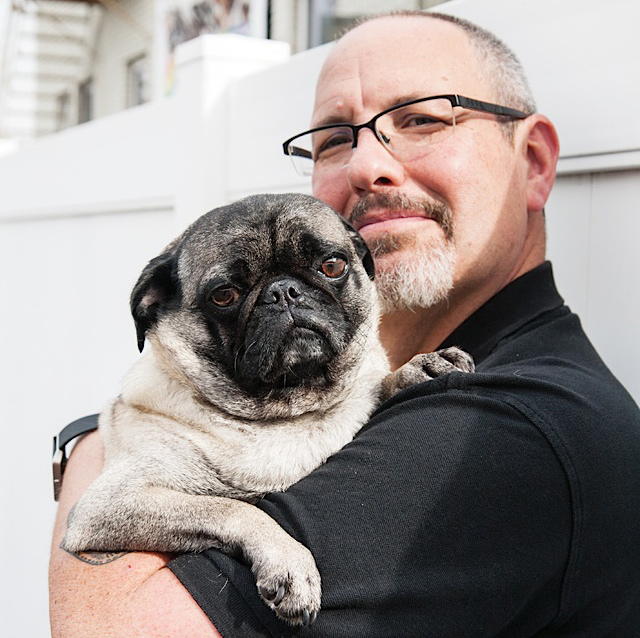 And then, on April 21, 2011, his whole world turned upside down. “That’s the day that my wife, Stephanie, suffered a massive stroke,” he remembers. “Five weeks later, she died. She was 49 years old. I will never know why it happened. All I know is that, in an instant, everything that I thought was important and everything that I thought my life was about, was shattered. And that’s when the blinders came off.”

He continues, “When I went back to work I soon saw just how much I had convinced myself that I was supposed to have a big corporate job. Then I realized how much I didn’t want to do it any more. I started to think about what I would do if I weren’t in the corporate world.”

The best parts of Bernstein’s days were when he dropped off his dog, Frannie, at Downtown Dogs in the morning and picked her up again in the evening. “It wasn’t just seeing all of the other dogs (although I am “dog stupid” as Stephanie used to say),” he jokes. “It was, as much, the tremendous positive energy and genuine warmth that greeted me every time that I opened the door. That’s a rare thing and it was exactly what I needed when everything else in my life sucked!”

He says, “No other business has the amazing combination of people, energy, love, passion, knowledge, and skills that make Downtown Dogs the awesome place that it is. And so I approached the former owner with the idea of selling me Downtown Dogs. Two years, and many conversations later, we signed on the dotted lines and Downtown Dogs became my new home.”

Offering both daycare and boarding for longer stays, Downtown Dogs is a dog’s home away from home. Much like daycare for children, doggie daycare helps with socialization — in this case, with other dogs and with people. As well, daycare provides an outlet for high-energy dogs who need lots of activity during their day (sometimes more than their owners, or parents, as Bernstein calls them, can provide). In a place like Minnesota, where the climate doesn’t always allow for a dog to run around outside, daycare provides a nice, warm alternative.

Longer term boarding provides peace of mind to a dog’s parents that, when they have to travel without their dog, for business, vacation, or any other reason, their dog is being well cared for and looked after, in a safe environment, by people who take that responsibility very seriously.

“When I was in the corporate world, I traveled frequently and often out of the country,” Bernstein says. “It was always easier to leave when I knew that Frannie was in good hands at Downtown Dogs.”

Boarding isn’t only for when parents are traveling. As Bernstein describes, family members come to visit who aren’t always “dog people” and boarding provides a safe way for parents to accommodate that. And, of course, families grow. He says, “We have had more than a few customers who boarded their dogs with us for a few days while they were welcoming a new baby into their family.” 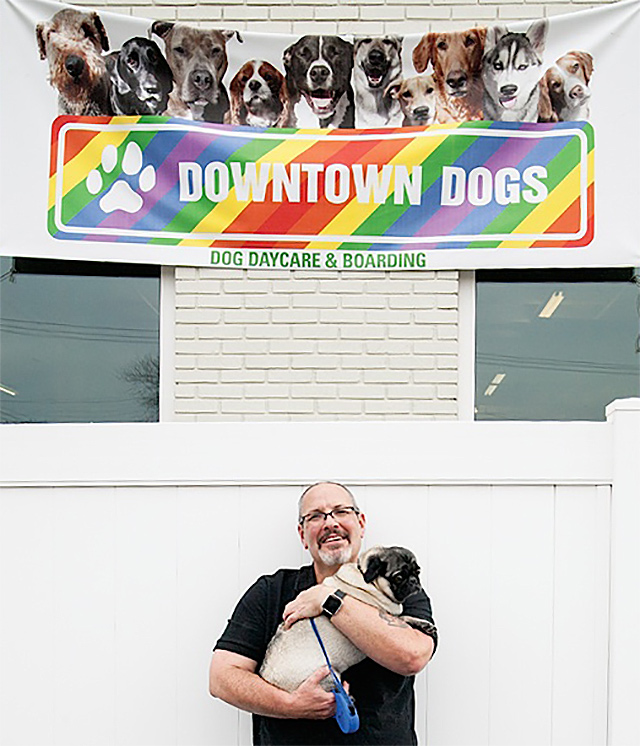 For any new clients, Bernstein and the Downtown Dogs staff talk to them about their philosophy and approach to dog daycare. “Essentially, we think dogs should be dogs,” Bernstein says. “We don’t try to treat them like people (other than our Halloween costume contest) but we also know that they each have a unique personality. We work hard to understand those personalities and how they translate into play styles and temperament. Understanding those things is an important way that we avoid having a lot of altercations in our playrooms.”

Every new client fills out a quick profile for their dog that Downtown Dogs staff then review with clients one-on-one. This takes a little more time, perhaps, than an online registration process but, invariably, Bernstein says they find out a key piece of information about the dog that they might not have otherwise. This is followed by a review of the dog’s vaccination records to make sure that they are up to date on required vaccinations: rabies, distemper, and Bordetella.

“We give new and prospective clients a tour of the facility if they would like one,” Bernstein says. “That doesn’t happen as often as you might think; people can see our three playrooms from our reception area so, right away, they get a pretty good sense of what things are like here. We review our contract and go over basic health-related information. Then we send the parents on their way and let their dog settle in with their new playmates.”

The three playrooms allow dogs to be separated by temperament and play style. “Each of our three playrooms — Florida, Vegas, and New York — has its own energy and personality,” Bernstein shares. “We don’t use a sorting hat like Hogwarts but, over the years, we’ve gotten pretty good at matching dogs and playrooms.”

Don’t the dogs fight? Sometimes. But, because of the way dogs are assigned to playrooms, and staff manages the energy in the rooms throughout the day, most fights stop before they ever start. When there is the occasional “dust up,” Bernstein says his dog handlers are on it right away before there’s a chance for anyone to really get hurt.

What if my dog gets sick while they are boarding? “We do whatever we can to take care of them,” Bernstein assures. “Every client agrees up front that we can take any steps necessary to make sure that their dog is well cared for, up to and including taking the dog to the emergency vet. We’ve never had a client get upset with us for taking too good care of their dog.”

As someone who has never sent his dog to daycare or boarded him while traveling, this writer is always cautious about letting others care for his pup, but Bernstein and his staff spend as much time with clients (both in person and on the phone) as they need for them to get comfortable with leaving their dog for a few hours or a boarding stay.

“We’re all dog parents, too, so we know how scary it can be to leave your dog with someone you don’t know,” Bernstein confesses. “Our webcams help a lot, too. Parents can peek in on their dogs whenever they want to.”

Each new dog starts their experience at Downtown Dogs with an evaluation; they are set up in a starter pen next to one of the playrooms. From the starter pen, the dog can observe all of the action going on in the playroom before actually joining in.

“We like to call them ‘courtside seats,'” Bernstein says. “One of our dog handlers keeps an eye and an ear on the dog to understand when they feel ready to be in the playroom. For many dogs that is pretty soon after arriving. For some, however, it may take longer. We never put a new dog on a play floor until they let us know that they are ready.”

Once a new dog is in a playroom the dog handler or handlers assigned to that room keep an extra close watch on the dog to make sure that they are settling into their new environment and getting along with their playmates. If a dog still seems a little tentative or shy, the handlers may adjust their schedule, giving them more time to settle in before putting them in the playroom.

“And, of course, new puppies can spend several visits without their feet ever really touching the ground, our dog handlers love new puppies,” Bernstein says. “There certainly aren’t any specific breeds that don’t work well for daycare and boarding. In fact, Downtown Dogs is known for the fact that we take all breeds, ages, and sizes of dogs, including all the ‘bully’ and ‘giant’ breeds. We love our Great Danes, pit bulls, and Newfies.”

“They are taken to one of our potty/exercise yards at least five times during the day so that they have plenty of opportunity to stretch their legs,” Bernstein explains. “And, since there are always staff members in our boarding room, those dogs get plenty of human company throughout their day. Dogs who are very social, but also know how to respect other dogs’ boundaries, do the very best. Picture a school playground, and all of the personalities and play styles you typically see, and you’ll get a pretty good feel for what goes on in one of our playrooms.”

Maybe it’s not a trust issue with leaving your dog behind, but a bit of guilt that comes into play. Bernstein reassures dog parents not to feel guilty about leaving their dog, whether for the day or overnight. “That’s exactly why places like Downtown Dogs exist and why we all love what we do,” he says. “It’s the best job ever. Every day we get to provide a service that our customers need and hang out with dogs all day long. It really doesn’t get much better than that.”