Down and Out (but Dealing) In the Driftless 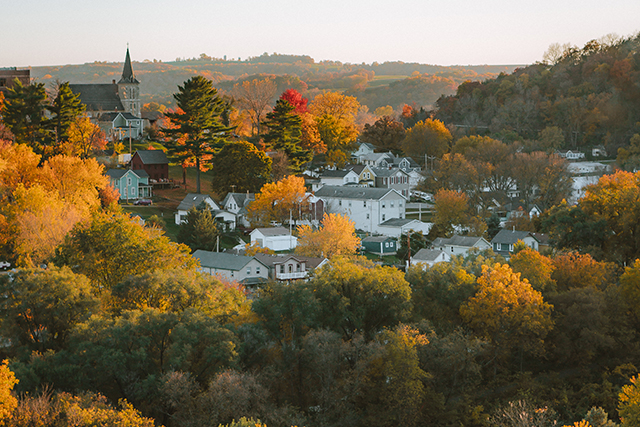 I have planned this trip to reset. Retail therapy hasn’t worked, substances haven’t. Meditation didn’t take. I have very little appetite. I either sleep too much or not at all. It’s textbook. My partner recently moved out. A trial separation graded pretty swiftly into a concrete breakup. We’d been together for eight years, and married for nine months.

The Driftless Area is called thus because, simply put, glaciers failed to drift through this region between c. 115,000 –11,700 years ago. The Driftless is a centralized blotch covering southeastern Minnesota, southwestern Wisconsin, northeastern Iowa, and the northwestern corner of Illinois. This is, essentially, America untouched: carved with rivers and sweeping valleys, the ground beneath honeycombed with sinkholes and caves. And while northern Minnesota is known for its rugged majesty, I tend to favor the south, where nightfall brings lightening bugs like constellations dispersed.

My car is packed to the windows with a tent, sleeping bag, self-inflating sleeping pad, lamp, string lights (for ambience), firewood, the works, as well as two coolers—one for food, the other for water and beer.

The landscape between Saint Paul and, say, Chatfield is basically a proletarian circuit board of name-brand crops and GAS FOOD LODGING, everything tidy and well-kept as a widow’s garden. The city of Rochester feels somehow Canadian. And then, as 52 crosses the Root River, the earth transforms; all jutting hills and sunbaked mesas and dramatic bluffs of eroded Cambrian bedrock.

Lately, my mood has been oscillating between oblique sadness and the anhedonic void. My therapist has urged me to manage time in increments—thirty minutes, ten, five. My dogs, whom I’ve left with a sitter, have been unusually affectionate, following me around my loft, waiting outside the shower, flanking my pillow at night.

So I’ve come out here to reset. It’s a Friday on the edge of summer; clouds move through the sky like old mammals through water.

I had originally planned to camp on Jim Gardner’s 160-acre family farm outside Spring Grove (pop. 1,320), which I’d booked on Hipcamp as “Driftless Farm Getaway.” But when I arrive, I instead opt to book their cabin, available under the same name on Airbnb. It’s a little more expensive—camping is $40/night; the cabin’s $89—but there’s a fire pit, grill and an outhouse. And it’s, like, 90° out here. The hosts, Jim and his wife Ellen, are extremely accommodating and flexible, allowing me to cancel my Hipcamp reservation and book the cabin right there, swiping my card on Ellen’s phone.

“I’ve lived here and helped farm all my life,” Jim, 25, tells me as we tour the property in his side-by-side.

And the word “Driftless” begins to take on another resonance. Whereas all my life I’ve drifted like a parade balloon—Chicago, rural Montana, Los Angeles, Portland, Minneapolis—searching for meaning and happiness with urgency, many of these folks have felt no such compulsion; what they’re searching for is already here. And, now 38, I know that I have passed through some people’s lives like a soft breeze, and others like buckshot.

Jim and Ellen (and little daughter Esther) currently offer pasture-raised chickens, turkeys and eggs, and sell on their website and at farmers markets in Winona and East Isles. He says, “We plan to add other livestock, such as cattle, pigs, sheep and goats to raise regeneratively.”

Regenerative agriculture is the future—it refers to farming dedicated to the reversal of climate change and, among other benefits, restoring soil biodiversity.

“This winter,” Jim says, “we’re starting a buyers’ club where people can order and we’ll deliver to drop-off sites around the area and the Twin Cities.”

I ask what Jim likes to do in his spare time.

“I love to read non-fiction and listen to shortwave radio.”

The view from the porch is stunning, lush and green: the inverse of my geometric view from downtown Saint Paul, which is a network of lines and planes and different shades of the same color, reflected from a thousand panes of smoked glass.

It’s late afternoon. I drive into town to check out RockFilter Distillery, which, according to Jim, serves “the best bourbon [you’ll have] in your life.” Spring Grove is a farming community, a crossroads among cornfields marked by church steeple and water tower. That an award-winning organic small-batch bourbon and whiskey distillery even exists here (with a very fashionable bartender, and his equally fashionable partner sitting opposite) is impressive and unexpected.

I have indulged all over the world—from lecherous dives in Key West, to inspired cocktail rooms in the Haut-Marais—and the mixed drinks at RockFilter are some of the most delicious and multidimensional I’ve ever tasted. After every sip of every cocktail, I shake my head.

A guy walks up and says, “Which race were you in?”

I blink at him.

He gestures at my t-shirt. “Which RAGBRAI.”

I look down, and I’m wearing a RAGBRAI XX 1992 shirt. “Oh, my partner sells vintage clothing,” I say, and feel a pronounced downshift in mood.

As I’m building a fire back at the cabin, the Gardners’ dog Kaya—a large black-and-white Karakachan—approaches, hesitantly at first, but then basically tackles me. I get up, laughing, and Kaya runs off, doubles back, and comes bounding toward me with such energy that I sort of square off and lean into the impact. She hangs out for most of the evening, trying to climb onto my lap, and in the morning she’s lazing outside the cabin door.

I see my exes in dreams, in places I’ve never been. They look happy, fulfilled, ageless. They never recognize me, and I can’t seem to speak. But I try to communicate through desperate gestures. Then I wake up, blinking at the ceiling. Sometimes I’ll cry, my entire face suddenly animated, trembling, as if some fault line inside my head has been tripped. And I’m always careful not to disturb the dogs, hiccupping instead like a jammed machine.

Each one of us is a grid of selves, a messy flux of psychic debris—and once I started to look outside myself, back at Sacred Heart Elementary, my personal debris started to collect—but out of our own disconsolate mappings love somehow withstands. We are equipped with this ability, to engage in the untranslatable rapport between two hearts, epic but still simple and natural, like the crosscurrents of prayer or a sign language among sea life. It is holy, this ability. It is perhaps holiness itself. And love becomes our most essential unit of measurement—quantifying everything, occupying us entirely—and we definitely feel its lack. No wonder we use such devastating words—crush, fall, breakup—to talk about it. In fact, neuroimaging studies have found that the same areas of the brain associated with physical pain light up during a breakup; similarly, “Tylenol has been shown to reduce emotional hurt” (Kross et al., 2011). Over the years, many flings and partners have taught me that love can leave your deepest and most romantic parts feeling empty as a whistling shell.

Turns out, all that dime-store psychology starts to make sense when you’re in distress: In the event of a difficult breakup, it is imperative that the most essential relationship you must rekindle is the one with yourself. And that’s why I’m out here.

In Lanesboro the following afternoon, I rent a canoe from River Rats Outfitters.

“You got another person with you?” asks Ken, the proprietor.

He looks sideways at me, and then glances in the river’s direction. “Well, shouldn’t be a problem. You’ll just have to paddle backwards.”

I spend all day on the Root. And while not exactly the experience I’d anticipated—my partner and I once canoed this same river out by Preston, and the afternoon was quiet and peaceful, punctuated by a spotted riverside fawn bent and drinking as we passed—this feels vaguely spring-breakish; I am the only canoe navigating hundreds of booze-swilling tubers. But one of the lessons this trip is apparently teaching me is to accept what I cannot change. So I apply a little cognitive dissonance: this is not an annoyance; I am lucky to be surrounded by such fun energy.

I open the cooler and toss him a can.

He holds it up. “Shotgun with me?”

This and exchanges like it follow me down the Root. And it’s the most fun I have all summer.

Back at the cabin, exhausted, I build a fire and spend the evening staring into it.

In the morning, mist will roll in and this entire landscape will disappear into obscurity. It will feel like driving down a mountain. I will take it easy on the corners, happy, content, reset. I will see two spotted fawns, delicate as origami, and a field of sand hill cranes, hunched as shepherd’s crooks.

It can be difficult to sit in silence with certain memories, which now seem frozen in amber like dead things preserved in full view. But it’ll get easier. It already has.

The Driftless is a peaceful and haunting and beautiful place. And if these trees could talk, I bet they’d sing.