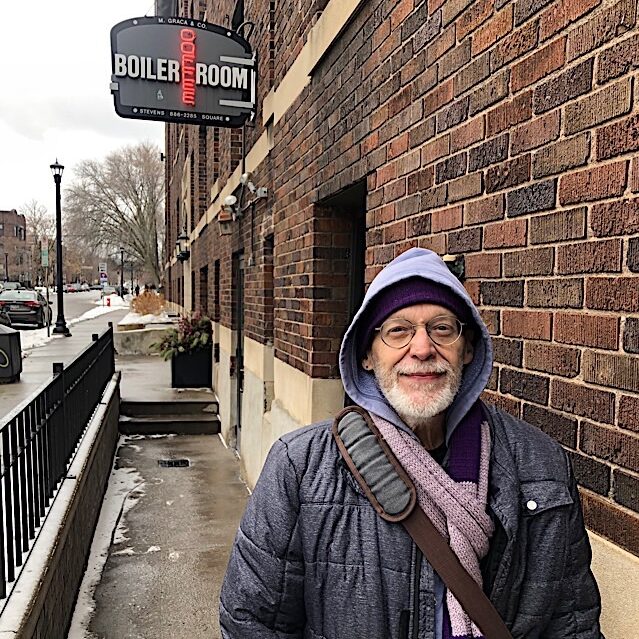 Denny Jacobson realized he was gay at a young age – five or six, he says – but in the 1950s, that wasn’t something people talked about. Despite having a supportive mother, he was assaulted multiple times as a child, later struggled with substance abuse, and witnessed his friends dying of AIDS while the president wouldn’t even acknowledge the crisis. Somehow, through these experiences, Denny has remained exceptionally positive, a firm believer in love and the goodness of humanity. Today you’ll find him in the Stevens Square neighborhood, where he’s lived for about fifteen years, doing his best to brighten everyone’s day.

Denny has been with his husband, Daniel Jackson, for almost fifty years. “I met him in 1973 when I was about 22,” he says. “I had told my gay friends, ‘I’m tired of dating, I feel like a hoe.’ So they introduced me to Daniel. Within a minute of meeting him, I knew he was special. There were, like, little sparkles around him and I was just overcome with ‘Yes, this is the one.’ I just knew it was him.

“The first three times I met him, he didn’t want me sexually – not that he wasn’t interested – but I made a point, and wanted to see how he was going to react. So we kind of dated, but I was still dating other people. After three or four years, I decided, ‘What are we doing?  Here is the person, who when I was 22, before I met him, I had prayed to God [for].’ I had said, being religious, I want to meet someone who I can be with for the rest of my life. And it happened!

“So by the time I was 27, we had sealed our love and relationship, and it just got better and better. We could have been married in 1977 when I finally realized the relationship was what it was going to be.” Officially, Denny and Daniel were married in 2013.

While they were falling in love in the seventies, Denny was also working on his own trauma healing. “In 1977 I went through a program – it was called Christopher Street, it was over on 22nd and Hennepin. It was a counseling place for gay people to go. Michael Roebuck was one of my counselors. They began talking about [AIDS]. They were saying gay men are dying in New York and Los Angeles, they’re dropping dead. They called it the gay cancer. By the early 1980s, Michael Roebuck [and several of my other friends] had all died of AIDS. It was really fast. Back then they didn’t know what to do, so people were just dying. It was a very sad time.”

AIDS now, of course, is manageable with the proper treatments, and the stigma has lessened. We as a community lost so many of our elders during that time. When asked if he had any advice for young LGBTQ people today, Denny sighed and said, “I don’t know. Just be careful, because things right now are crazy, and they could get worse for GLBTQ people. You can’t solve the hatred, so I think you do need to be careful, but if you can be out and be open, that’s the best thing to do. Just keep watching what’s going on in the world. Because people can change our rights, people could do that really easily coming up. I want us to band together and be as supportive as we can, and I mean to everybody, not just GLBTQ, but to everybody.

“I like being more positive, because the negative stuff can just drag you down. I always take those negative things and flick them up into the air, little boxes of icky stuff, just flick them up there and say goodbye. The one thing God’s son says is, ‘love one another as I have loved you.’ Yeshua never said who! He just says to love one another – so that’s everybody. That’s how I look at it.”

Wise words to live by.

Thank you, Denny, for being who you are, and for helping us do the same.