Declaration of Love: An Engagement Story

“I had an inkling right away.”

“I realized I couldn’t see sharing my life without him.”

Such comments from José González-Maciel and Alex Mazurek, respectively, are typical of couples as they reflect back on their engagement. But how a couple gets to those statements is unique to the relationship and the individuals. 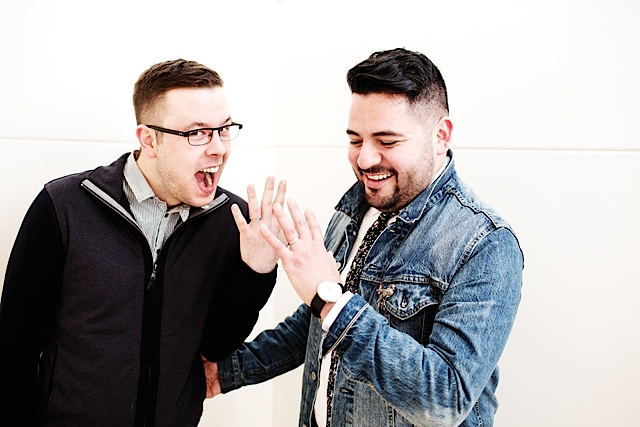 José and Alex officially met at a downtown bar through a mutual friend, but that was just a quick introduction. “A week or so after that, I ran into Alex in Dinkytown and discovered that he lived across the street from my office,” José says. “He accepted a lunch date — Wally’s in Dinkytown — a couple days later.”

Shortly after the lunch date, José went on a month-long work trip to Copenhagen, during which he and Alex would Skype twice a day, which José describes as “grossly adorable.” He came back from Copenhagen during Pride weekend, and they’ve been together since, nearly five years.

José had an inkling that the relationship might be marriage material right away. “Alex is such a special man. He is extremely intelligent, genuinely one of the nicest people I have ever met, and is extremely motivated,” he says. “He is also very level-headed, which is the antidote to my hot-headed nature. Alex is my family, so it was due time that we made it legal.”

Alex, as part of his level-headed nature, took things as they came. “José was a little overzealous from the beginning,” Alex says. “He wanted me to move in after two months. I take my time with things. I never questioned our relationship, but wanted to enjoy our relationship as it was without getting entangled in what the future held. At about the two-year mark, however, I realized I couldn’t see sharing my life without him.” 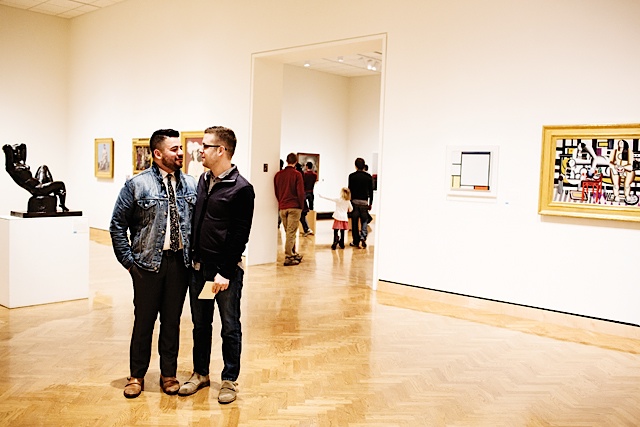 When the time came, José had rings custom made by Filigree Jewelers in the North Loop, knowing that Alex wanted a classic wedding ring with blunt edges: Alex’s done in white gold, while José’s ring is rose gold. “I wanted to propose with both rings because having only Alex wear a ring during our engagement felt a little weird,” José says. “We are both engaged, so if one of us wears a ring, both of us wear a ring.”

He continues, “I skipped asking Alex’s parents. There was no need. I knew they’d be thrilled. Instead, they were the first ones we called upon getting engaged.”

The proposal took place during midterms of Alex’s final semester of law school. Knowing that his studying schedule was going to be pretty intense, José had to have a pretty good reason to get him to Minneapolis Institute of Art, or at least close to it. Also, since a photographer was booked for the proposal, José needed an excuse to make him dress up at least a little. So he made fake plans to meet one of their friends for drinks to celebrate her birthday.

Other than that, the rest of the plans were logistical: Dinner reservations at Spoon and Stable, hotel reservations at the Chambers. “Somehow, going back home after such a high seemed a little lackluster,” José says. “I also wanted to include our friends somehow, so I asked some of our closest friends to meet us at Marvel Bar after our dinner plans. It was so nice to be able to close out the night with them.” 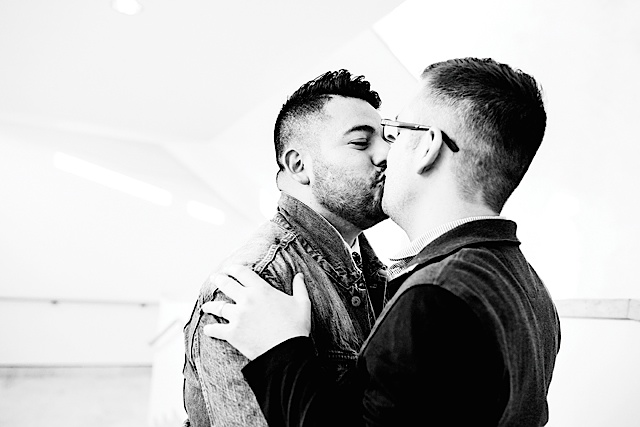 Alex knew the proposal was coming, he just didn’t know when. “He is the worst at keeping secrets. Every time his best friend would call, she’d start the conversation asking, ‘Is Alex in the room?'” he says. “A few days before he proposed, he was showing me something on his phone when he received a rogue text from my best friend saying, ‘OMG, he’s going to love it!’ And, one night at two a.m. he hastily sent an email upon realizing my ring size was a 10.5 and not, as he had assumed, a 10.”

Since José admits to his lackluster secret-keeping ability and Alex knew it was coming at some point, José wanted the proposal itself to be a surprise. Initially he was planning to propose to Alex during an already planned trip to Big Sur. A good friend of theirs told him that Alex had mentioned that he thought he was going to propose at some point during the trip, so in order to maintain the element of surprise, he decided to propose before Big Sur.

“I vacillated between getting on one knee or not. I opted against it because it just didn’t seem like something I would ever do,” José says. “Instead, I wrote everything I wanted to say on cards, which I handed to him and asked him to read. We have traditionally written cards to each other for any milestone event in our lives that we keep tucked behind framed artwork on our bedside tables, so this added to the collection.”

Alex laughs as he says, “Long story short: I was a stick in the mud. I was in my final semester of law school, and we were leaving for a vacation two days later. I had to finish up some writing I had for both work and school, so I could enjoy our vacation worry-free.” 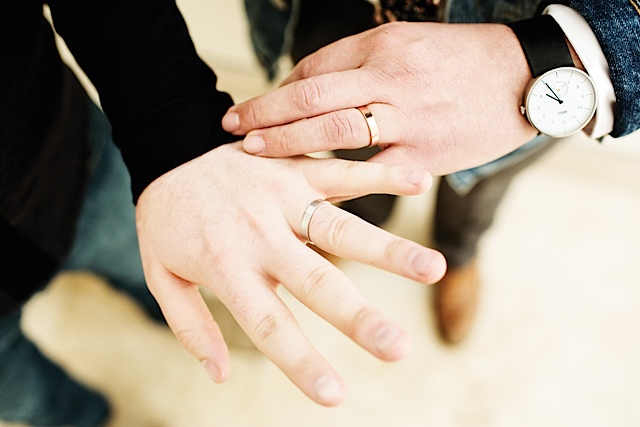 Alex shares he was initially unwilling to shower, change, or leave the apartment. “After José’s coercing, I made myself presentable enough to grab a single drink with his friend for her birthday,” he says. “As soon as we got in the car, she called to say she was going to be late because she was doing her taxes. I was immediately annoyed because I could still be writing at this point.”

José innocently suggested they stop at Mia while we wait for her. Alex agreed on the condition that he was able to sit on the ground floor and continue working on his writing. Jose was insistent on a quick stroll through the contemporary art exhibit on the third floor, to which Alex begrudgingly agreed. Ordinarily, the contemporary art section is a favorite; they make frequent trips throughout the year, especially in the dead of winter. They even have a Chuck Close print hanging in their living room, making it an appropriate backdrop for what was to happen next.

“I thought, if he takes any time to actually admire any of the work, I was turning around and heading back down stairs,” Alex says. “As the thought of bolting to return to my computer percolated, I realized José was nervous and breathing hard. I turned to him as he pulled something out of his pocket. That’s when I knew what was happening. He handed me an envelope with a letter. We sat together as I read it. It ended with, ‘Will you marry me?'”

Having not yet realized the birthday drink was a ruse, Alex figured they were still going to meet José’s friend. But, they left for the Le Méridien Chambers hotel, where they shared champagne while calling friends and family to let them know, as only their closest friends knew this was going to happen. 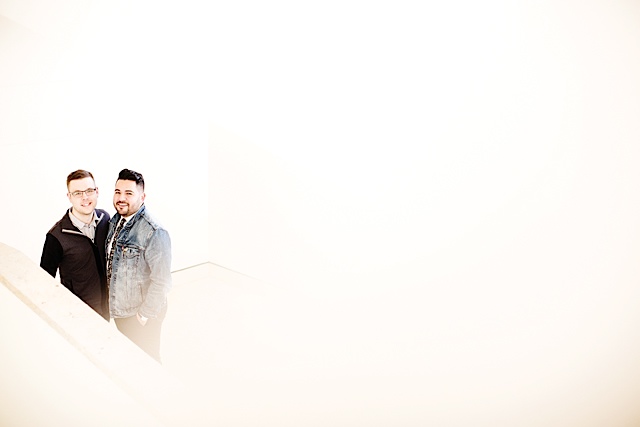 “Right before I was nervous that everything I had planned would collapse and I would have to improvise,” José adds. “During, I honestly blanked out a little. After the proposal I was just really happy. I immediately wanted to start planning the wedding, but Alex gave me a moratorium on any wedding talk.”

Alex confirms, “We weren’t even out of Mia yet and José started talking about dollar amounts and people. I shut that down right away. I wanted us to enjoy the moment.”

Thankfully, Eliesa Johnson of Photogen Inc. was on-hand to capture the moment so the couple can cherish the memories for years to come. As their photographer, Eliesa made the men feel very comfortable right off the bat. “So much so that Alex initially thought he had met her before, which he had not,” José says. “It was great to meet Eliesa before the engagement and go over our relationship; she made us feel that she was personally invested. I cannot say it enough: she is absolutely wonderful. She is doing our wedding photos as well.”

José admits that not everyone needs to take engagement photos, as he’s all abut doing whatever you want for your engagement. But he says this felt right for them, a sentiment that Alex echoes. “At that time we didn’t know what we wanted to do in terms of a wedding,” Alex says. “If we were going to completely elope or have a formal celebration. It was smart of José to want to memorialize it somehow.”

With a wedding set for April 1 of this year, José and Alex have reached the end of the planning stage, which saw them wax and wane on whether no wedding or a big wedding was right for them. The couple decided on an intimate wedding of about 50 of their closest friends and family in their home, followed by a honeymoon in Oaxaca, Mexico.

“I don’t think the engagement changed our relationship,” Alex confides. “We knew before that our lives were inextricably intertwined. The engagement was just a perfunctory symbol of something we already knew; it was more of a declaration to everyone else that we were dedicating our lives to one another.”

José agrees: the way people perceive them as a couple has changed. “There’s something about soon being legally joined that legitimizes our relationship,” he says. “For a lot of people in our lives we serve as the only example of what it means to be a gay couple. Through our actions we always try to demonstrate that we have similar values, we work hard, and we try to be good people.” 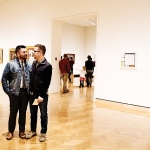 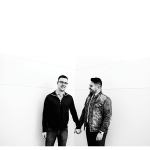 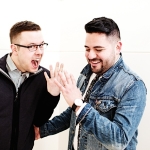 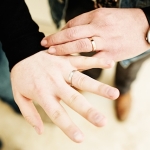 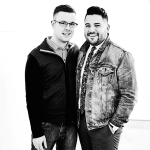 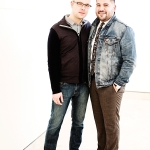 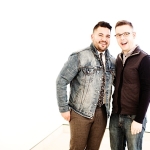 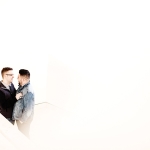 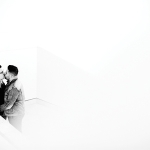 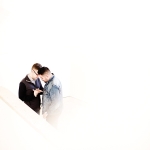 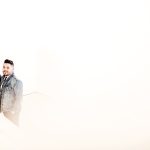 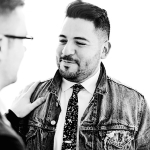 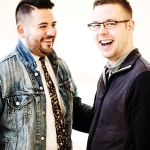 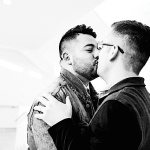 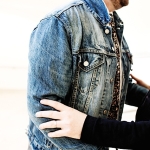