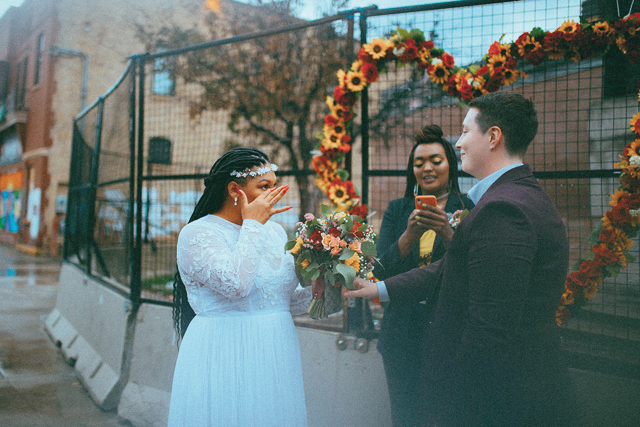 Celina and Alexis Berndt quickly became Minneapolis icons after getting married at the burned-down Third Precinct.

In protest and in love. That’s how Celina and Alexis Berndt’s marriage began. The couple said “I do” on June 28, at the former Third Precinct in Minneapolis, which had been burned down by protesters in the wake of the murder of George Floyd. “Our wedding was a protest against police brutality toward Black people and the LGBTQ+ community,” the couple says.

The wedding, which was also on the fifty-first anniversary of the Stonewall Uprising, came last minute, as the killing of George Floyd, and the ongoing police brutality against Black and LGBTQ+ folks, shifted their priorities.

“Although we were already engaged, the wedding was extremely last minute. We got engaged in February and were planning to wait a year or two before we got married. However, after the murder of George Floyd, our priorities changed,” they say. “We had been to multiple protests and witnessed the brutalization and arrests of protesters, most of them being people of color. We realized we could be arrested, hospitalized, or worse, so we decided to tie the knot immediately.”

After being together for a year and a half, the Berndts didn’t want to wait any longer to get married, and their friends and loved ones were just as excited for them.

“Because our wedding was so last minute, our group of friends banded together and started planning the wedding. They only had two weeks and planned the most beautiful reception at our friends Mark and Michaela’s house,” they say. “Our friend Nadirah was our officiant, and they connected us with our photographer, Emma Wondra (Instagram @emmawondra). Michaela baked an adorable two-tiered, heart-shaped cake, and Celina’s sister, Allison, brought a rainbow-themed cake as well. Nadirah ordered tacos for the reception from Taqueria Hacienda on Lake Street. Our friends Mimi, Kate, Roman, and Zoja all helped to plan and decorate for the reception.” 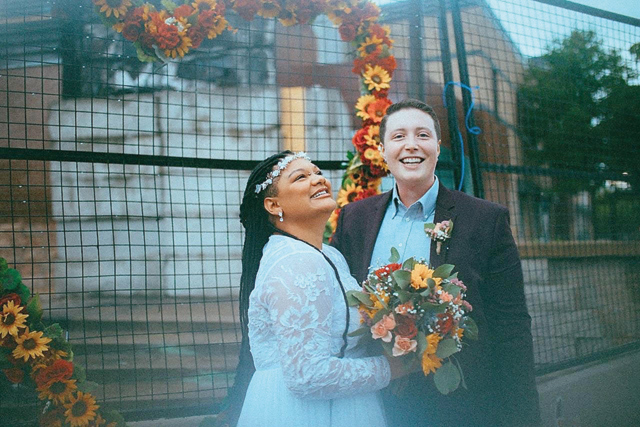 To say it took a community to pull off the adorable and activism-driven wedding would be an understatement. Not only did friends of the Berndts come together with just a couple of weeks to give them the wedding of their dreams, but the wedding itself served as an event of healing and love for the community.

“My favorite part of the wedding was the feeling of healing and community,” Alexis says. “We got to take some time away from the anxiety and trauma of protesting and providing mutual aid—to celebrate love, family, and liberation.”

“My favorite parts of the wedding were the overwhelming feelings of joy, community, love, and hope for the future,” says Celina. “I got to marry the love of my life!”

Following their wedding, the couple is continuing to pave the way for a police-free future in Minneapolis and beyond.

“I’m working on earning my bachelor’s degree while providing mutual aid to the Twin Cities area,” says Alexis. “I want to continue to use my social media platform (Instagram @actualangel) to provide community resources and updates. We’re saving to buy a home in the near future as well as thinking about having children within the next five years! Before that, though, we want to be able to travel.”

“Everything Lex said! I’m also looking forward to continuing to learn what a police-free future will look like,” Celina adds.