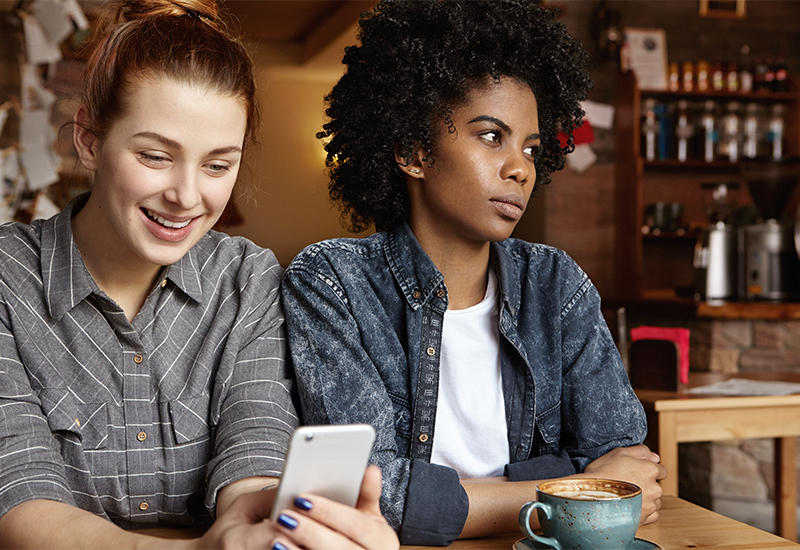 A few months ago, my spouse, C, was invited to dinner by a woman of some renown in their shared profession. I do not like this woman—let’s call her Horrible (not her real name).

This put me in a bit of a pickle. Horrible was indeed in a position to help my spouse’s career. But, I suspected, the only thing Horrible was interested in advancing was her creepy romantic agenda.

Why did I suspect this? Because I’m not a frickin’ idiot!

Of course, we should have ignored this clearly manipulative overture. But I was intrigued. I wanted to meet this broad. And, I reasoned, after she met me and my relationship to C took on human form, she might lose her appetite to stalk C. I was wrong.

What the evening amounted to was a chaperoned date. Horrible attempted to woo C, ignoring me as I glowered at her from across the table. She used her professional credentials as a love poem, pursuing C with promises of lectureships in foreign cities with umlauts in their names.

And guess who picked up the check? Not Horrible! Not “I’ve-been-invited-to-speak-this-summer-in-Malmö.” No! Me! The chaperone! When the check arrived, Horrible didn’t even acknowledge it. It was as invisible as I was.

Following the dinner, after getting drunk on Horrible’s pledges of casting C in starring roles at academic confabs, C began to trust Horrible’s intentions to mentor her. So, when Horrible invited her to dinner—without the chaperone this time—C accepted.

Now, I could have greeted this news with a temper tantrum. But I am a dignified and secure middle-aged woman. So, instead, I told C that I hoped I was wrong about Horrible. I wished only that Horrible would take C under wing—and not into her bosom—and deliver on all the promises she made. I gave her a kiss and my assurance that I trusted her completely, and waved as she headed off on her date.

And then I opened a bottle of wine and guzzled it.

C arrived home a few hours later, looking as dazed as an airplane crash survivor. It seems, dear readers, that my assessment of Horrible’s motives was spot on! Quelle surprise!

Horrible spent the dinner deflecting C’s attempts to talk shop, and seemed shocked—insulted even!—that C would want to dwell on something as prosaic as her career prospects. Instead, she suggested they repair to her condo, which was conveniently located next to the restaurant. Horrible had just redecorated her bedroom and she wanted C’s opinion on it. C turned down the invite and hurried home.

In the wake of the #MeToo movement, it’s important to note that men don’t own the market on predatory behavior. Women can be jerks, too.

P.S.: Horrible stuck C with the check for the dinner. So, she’s not only a jerk, but a cheap jerk.