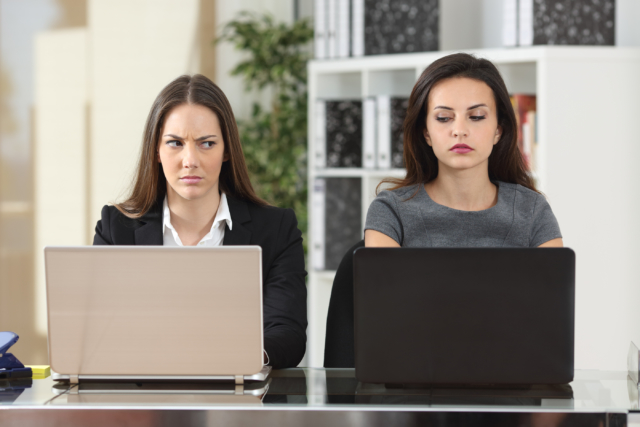 Several years ago, when I learned she was leaving the company we worked for, I broke out in a jig in my office. And I don’t even know how to jig! My body took it upon itself to react in a spontaneously combustive jig!

Yet, a few months ago when my archenemy sent me a “friend” request, I accepted it immediately.

I’m sure her therapist is as stumped as mine is over our ersatz camaraderie.

When we worked together, I would cringe each time I saw her stupid face or heard her stupid name: Agathe. She’s got some nerve having that name! She’s not even French! She grew up in Iowa! But that never stopped her from wearing a beret or pompously insisting that people pronounce her name as “A-gat.” I, of course, always introduced her in meetings as “Aga-tha,” because I’m petty and vengeful.  And because I’m a patriot and that’s how we pronounce that name in America!

Agathe and I had quietly loathed each other for years. We started our careers in publishing around the same time. She successfully rode each swell that roiled our troubled industry through the power of fawning, wheedling, and bootlicking. She would threaten to quit every six months, only to be wooed back—and promoted—by insecure executives who fed off her masterful toadying. Most repulsively, she routinely sacrificed the small needs of her staff in order to benefit herself.

I, on the other hand, rose to the middle of the organization through a combination of hard work and being a pain in the ass: but all in the name of defending the proletariat against our corporate overlords.

I once organized a break-in to our HR director’s office so we could get a peek at our personnel files. In my file, I found dozens of pink memos written in the HR director’s crabbed hand. Her handwriting was nearly indecipherable, so I could decode only two words in her description of me: “demagogue” and “ardent.” I approved of both terms and, frankly, was impressed that she knew how to spell “demagogue.”

Agathe and I maintained a healthy distance at the office. If she were forced to interact with me, she’d stand just outside my doorway, inveigling me in a high-pitched whine generally associated with birds of prey. She’d perch at the lip of my office and knock tentatively at my open door. Her faux timidity was one of the things I most disliked about her. She was, in reality, as aggressive and ruthless as a honey badger, though without its roguish charm.

“Hi?” she’d say. This is how she’d start every conversation with me. I had long wanted to rip the question mark off the greeting and slap her silly with it.

For as much as we hated each other, we managed to treat each other with strained professionalism. We rarely came at each other head-on. Rather, we each were masters of the flank attack. She may have been an inept, lazy, pompous self-promoter, but I always respected her as a worthy opponent.

Once we became Facebook friends, though, I was baffled to discover that my hatred for her began to mellow. And that made me sad. Having her as my enemy gave me a raison d’etre. I suppose Superman would regret losing Lex Luthor, too. Maybe that’s why Superman never kills Luthor.

For all the talk of how social media is destroying civility, little has been said of its power to strip relationships of a healthy fervor.  How can you maintain a strong enmity or love for someone when faced with the banality of their daily life? Now when I see her on my feed, the most passion I can muster is an eye roll.

Thanks to Facebook, I’m reminded daily that I only mildly dislike Agathe. I miss hating her. I need a new archenemy.