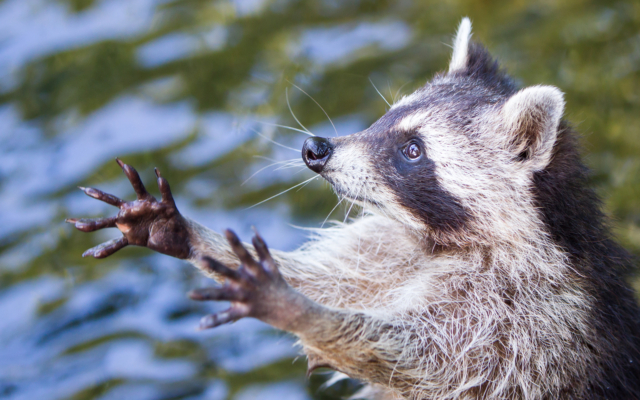 I came home this morning to find a raccoon in my house. I wish I could say that this is an unusual experience.

I have a dog door that leads from my back porch to my yard. It’s designed to allow my dogs to come and go as they please. This system worked well for several years when I was living at the house full-time. My three dogs noisily patrolled the perimeter of the yard, chasing intruders, and keeping my home free from varmints.

I’d often spot critters in the wooded areas just beyond my fence, staring wistfully into the yard, longing for entrée. I never understood what they hoped to find within my boundaries and why they were so determined to break in. It’s not like the lawn is slathered in peanut butter and honey.

The dogs kept nature under control until last year when something very unnatural happened: I fell in love. Then all hell broke loose.

The problem with being in love is that it makes you want to make concessions to please your beloved. So I merrily agreed to abandon my carefree life in a lakeside resort community and move 90 miles away to an ultra-progressive suburb where even non-lesbians drive Subarus.

The dogs, of course, came with me, leaving my home vulnerable to vengeful beasts. It didn’t take long for them to begin their assault.

It started charmingly enough. A robin built a nest directly above my front door. Squirrels quickly recognized a breakdown of defenses and set up camp in my gardening shed. They now dart in and out of the shed through a small hole in the wall, planting their flag more firmly with each acorn they stockpile in their arsenal. Chipmunks have become so confident in their station that they no longer manically tear across the landscape. Instead, they stroll languidly.

Then came a very aggressive community of bees that do not seem to appreciate that I have a Save the Bees bumper sticker on my hybrid SUV. They hate me and I suspect they are not lifting one finger to do anything to save the planet. I have yet to see one of them bother to pollinate anything. They’re like a bunch of ineffectual, cranky Commies, drunk with bitterness and screaming about the bourgeoisie but refusing to make the minimal effort to improve their own plight.

And then there are the moles. I never believed that moles really existed. I thought they were something created by Scientology to make us believe that the Earth is ruled by a subterranean superclass of monsters with inconspicuous eyes and shovel hands. But now I know they are real. They have created an elaborate tunneling system under my yard, making it as spongy as the surface of the moon.

Of all the wildlife, the raccoons are the most talented at breaking into the house, but they are also the least destructive and the most respectful. When they manage to pry open the locked dog door, they make only surgical strikes on foodstuffs. They’ll pull a box of cereal from a cabinet, neatly emptying it into their gullets, leaving only the empty box as evidence that they had visited.

Only my stray cat, Mittens, remains on full-time duty. We’ll return on the weekends to find him lying in the front yard too exhausted to even whack the moles that occasionally pop up from their underground lairs, which used to be his favorite hobby.

And even this weak defense is about to crumble. My beloved wants to move Mittens to the suburbs. And Mittens, who, like me, had long been reluctant to let anyone tame him, seems ready to give up the wild life and become domesticated.