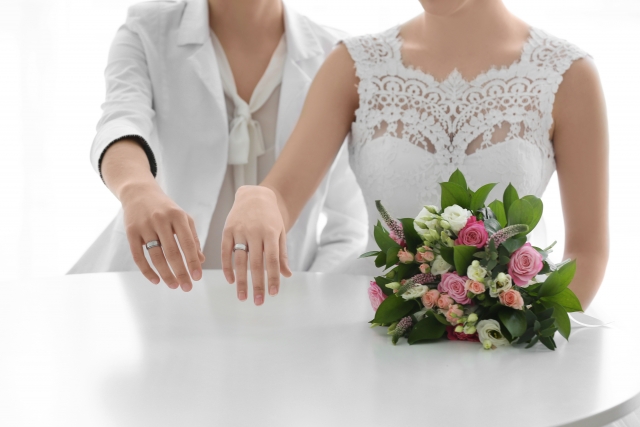 A year and a half ago, as we were drafting our wedding vows, I wanted us both to promise to never, ever, keep Cheez It crackers in the house.

We quickly decided to keep that out of the vows because we knew it was a promise we could not keep.

Several other vows were left on the cutting room floor—many having to do with self-denial of favorite snack foods.

“We’re middle aged,” my bride reasoned. “We can eat whatever we damn well please. Who’s going to stop us?”

Ultimately, we didn’t vow much of anything because our wedding ceremony turned out to be a bit of a mess.

The ceremony was delayed an hour because friends were Skyping in from different parts of the world, and there were technical difficulties getting everyone online. The tech team who was hired to coordinate the calls quit mid-project, packed up their equipment, and left before the ceremony. So our other guests jumped in and used their phones and laptops to virtually connect our remote friends.

While this was going on, C and I were nervously killing time in our room, guzzling champagne. The ceremony was held in a historic inn, which had provided us with a bedroom to prepare in. We spent the hour pacing the small room, silently practicing the vows we had written to say to each other. It had taken me weeks to write my vows and I wasn’t happy with the result. I found it impossible to express the depth of my feelings for her. It was like giving oxygen a hearty pat on the back and glibly thanking it for giving me life.

Finally, everyone was connected via smart phones, and as we made our entrance to George Michael and Aretha Franklin singing “I Knew You Were Waiting For Me,” I saw several disembodied heads floating from phone screens in the darkness.

A good friend was the officiant of the ceremony. Over drinks the week before, we went online and signed her up to become a pastor of the Universal Life Church, which qualified her to marry us. C and I wrote our own ceremony. All she had to do was read off the script we gave to her.

The problem was that C had given her the wrong document. She accidentally printed out a bunch of random notes on stuff we needed to get done before the wedding, including a grocery list. Cheez Its was at the top of the grocery list. Our friend read it all dutifully. This led to a lot of confusion.

When it was time to say our vows, we abandoned our pre-written vows and instead just riffed. C told the colorful history of our 26-year journey to the altar, and poked gentle fun at my quirks. I made some loose comparisons between the family dynamic of sea otters and my relationship with C’s kids, and then closed by singing a chorus from a Broadway show tune. We never actually got around to making vows. I wondered at the time whether that invalidated our marriage.

After the first kiss, and the toasts, and the cake, we embarked on married life. Vowless.

Yesterday, we celebrated the 28th anniversary of when we first met. We only had an hour to squeeze in a quick celebration before the kids arrived home from school. So we drove down the street to the church that had hosted the coming out group where we first met.

As we parked in the church lot, making out like teenagers, I realized that while we failed to make wedding vows, I had lived up to an important promise I made to myself 28 years before. “One day,” I vowed to myself on the night we first met, “I’m going to marry that girl.”