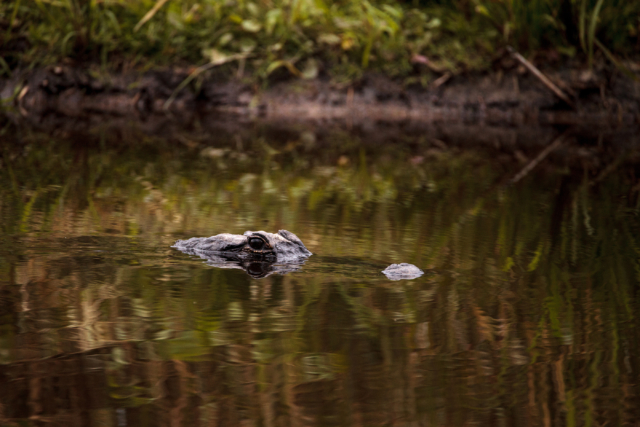 Maybe it wasn’t the best idea to read a compilation of all the people who have been killed by alligators in Florida since 1990. Especially not right before we headed to an alligator-rich area to swim in a remote natural spring.

“Did you know that in 1990, the same year we first met, an alligator killed a woman who was enjoying a picnic with her family on the shores of the very springs you want to swim in?!” I exclaimed to my spouse. “The alligator dragged her into the water and buried her in an underwater cave shortly after she served her husband a plateful of Hawaiian salad.”

I don’t know what I was more upset by: the image of a loving wife in the jaws of a prehistoric beast, or the disappointment her husband must have felt in not being able to enjoy his Hawaiian salad. I love that stuff! It is the only dish that allows an adult in polite society to eat marshmallows as part of a meal.

My spouse didn’t even bother looking up at me. She was too busy scrambling around the hotel room, trying to ready the kids up for our day trip. We were spending a long weekend in Orlando, and she wanted to take a nature break from theme park madness.

“Will you stop reading that nonsense and focus on something important: like making sure we bring enough water so the children don’t die of dehydration!” she said.

And that, dear readers, is our relationship in a nutshell. Her focus is on the boring, day-to-day details of keeping our family afloat. And I’m in a perpetual panic over the monsters—real and imagined—that are stalking us from the depths.

Our relationship is just like a Disney fairytale! We fell in love in our mid-20s, but were cursed by a dark fairy and driven apart. For the next quarter-century years, we travelled separate paths until we were wondrously reunited on the 25th anniversary of our first kiss. We married a year later.

But Disney never follows its lovebirds after they buy a two-flat in the suburbs, merge kids and pets, and struggle to understand the multitudes of stupid and annoying habits each partner has nurtured over 50 years of life.

She has two teenagers, who I adore. They regard me as a slot machine that spits out sugary drinks, junk food, and cash anytime they feed me a compliment. My spouse reminds me constantly that bribery is not parenting. The kids and I disagree.

Becoming a parent at age 50 is like mysteriously waking up in an enchanted forest after falling asleep in the comfort of your own bed. It’s shocking and scary, and you don’t know how the hell you got there. You have stumbled into a magical land filled with strange and vulnerable creatures who are counting on your messy skills to navigate them to safety.

This has been a challenge for an adult who often forgets to brush her own hair before heading to work.

I’m terrible at the details of child rearing, so instead I concentrate on battling the biggest monsters threatening our family. For example, we just learned that our 18-year-old got accepted into a very prestigious and very expensive university. While his mom began teaching him skills on how to live without her, I strapped on my armor and began an assault on the debt-breathing tuition dragon threatening us.

And at the hot springs near Orlando, while my spouse slapped sunscreen on the kids and fed them fruit instead of the crap they wanted from the vending machine, I vigilantly paced the shore, watching for alligators and any other monsters that might eat us.