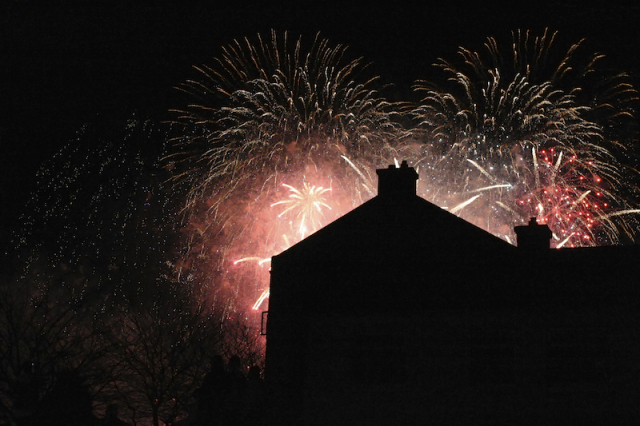 I’m writing this while looking out the large windows of my hotel on the raging North Sea. The whole of northern England has been under a dark cloud since my arrival. Continuous downpours have flooded most villages, including the one I’m in now, forcing people to take row boats down the cobbled streets, making the whole country look like a gloomy version of Venice. In my posh hotel (well, posh by Northern England standards), I’m perched on an island above all the destruction.

And on my small island is an odd assortment of castaways. It’s a decidedly older set of British folk, so attached to their country that even on vacation they stubbornly refuse to leave it for the less expensive and much more temperate beaches of Spain. Instead, they pack themselves into tweed and rain boots and stalk north to this forgotten industrial outposts, the only claim to fame is a beach with tides so troubled that the churning waters claim dozens of lives a year.

I’m the only American in the hotel. I am here because I am an idiot.

My idiocy has nothing to do with my love of forbidding, Northern places of little obvious charm. I actually consider my attachment to unloved places to be a mark of good character. It takes no imagination to travel to Miami Beach in the winter. But it demands a certain admirable lunacy to journey to a place known for its inhospitality even in the best of weather.

So in 2015, when I was planning where to spend the Christmas holiday, I didn’t hesitate to select the coast of Northern England.

I was briefly between relationships when I made that plan. But my temporary single status had nothing to do with my decision. I’d never let a relationship stop me from doing exactly what I want, when I wanted to do it. In fact, I was baffled by friends who refused invitations to travel because of the constraints of a relationship.

“But you really want to go,” I’d say, struggling to understand why’d they considered their lover’s feelings over their own selfish desires.

This was usually greeted with a helpless whimper and defeated slump of the shoulders. And then they’d return to the comfort of their understandably healthy relationship, while I’d shrug off emotional commitment, toss on a parka and march off for my next solo adventure.

But in 2015, something remarkable happened. I met someone I don’t want to leave. Even going to the grocery store without her creates an ache.

Early in our relationship I mentioned that I had plans to go to England over the holidays. Because of her personal commitments, it was impossible for her to join me. And because of my commitment to stupidity, I didn’t consider there was an option for rearranging plans so that she could join me. So we ignored the subject for months, because even the mention of the word “England” would cause us both to pout.

And so, stubbornly, I got on the plane even though I didn’t want to. And, sullenly, she allowed it because grabbing my ear and dragging me back to the car would have caused a scene.

Now here I am on New Year’s Eve. The rising seawater has created an actual moat around the hotel cutting us off from the rest of the world. We’ve been told that it might be impossible to leave town. In the past, I would have embraced the natural disaster as an opportunity to revel in my own company for a few days more. But I’ve got a plane that leaves in a few hours. And, most importantly, I’ve got a reason to get home. So, I’ll find an escape and I’ll get home. Because, finally, I realize that’s where I belong.