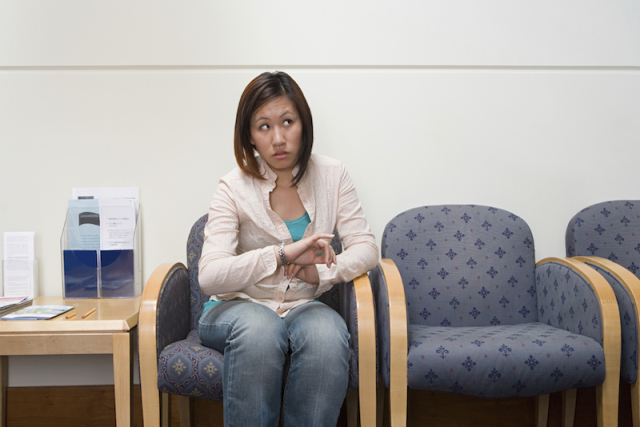 This morning, I went for my annual checkup at my doctor’s office. I was super crabby because I was instructed not to drink coffee before the appointment. This was necessary because the visit included a cholesterol check, and, apparently, cholesterol doesn’t like coffee. Just another reason for the world to wage a war against cholesterol. Coffee-hating bastard!

Anyway, there I was, uncaffeinated and crabby as hell in the waiting room, when in walked a striking woman wearing a stylish cape. Naturally, this caught my attention. Women who wear capes are either very rich or very insane, and you usually can’t tell on which side they fall until engaging them in conversation. Same goes for women in picture hats.

The woman appeared to be around my age so I broke the ice by bringing up a subject that all 50-somethings are obsessed with. “So, have you had your first colonoscopy?” I asked. “You know, you get a free one when you turn 50.”

The woman looked at me as if I was insane, which I thought was ironic since I wasn’t the one wearing a cape.

“I know you,” she said with a combination of certainty and hostility, which suggested bad blood between us, another irony given my feelings about cholesterol.

“I’ll give you a hint,” she said, pointing out the window to a bar across the street.

My doctor’s office is located in a neighborhood I used to frequent in my 20s and 30s. It was the center for the lesbian social scene, and the bar across the street was base camp for girl-action. I spent nearly every weekend at the bar doing what every lesbian does starting in her mid-30s: settling into a string of monogamous longish-term relationships where carefree fun is forbidden.

Once as sparkly and promising as Oz, the bar’s exterior now looked as beaten and desiccated as the failing livers of its former patrons. A few years back, a couple friends and I thought it would be fun to pop in the bar and relive our youth….always a mistake. After a dreary hour, we left feeling depressed and smelling of tobacco and stale disinfectant. The next day I got a tetanus shot.

I stared at the woman in the cape. Even in the bar’s glory days, I couldn’t picture this fancy broad walking through its doors, which in typical blunt lesbian style, were suggestively painted mauve. It was about as subtle as entering through a Georgia O’Keeffe painting.

“Are you sure? I think I would have remembered you,” I said.

“I would have thought so, too,” she sniffed. She abruptly stood, grandly swept the cape over her shoulder and stalked to the other side of the waiting room, turning her chair so she wasn’t facing me.

The strange incident transported me back to my younger days, when such encounters were a routine occurrence. There was rarely a weekend that went by when I wasn’t confronted by some woman who I had inadvertently injured. At the bar across the street from my doctor’s office, I spent most of my time seeking refuge from these uncomfortable assaults in the bathroom or behind one of my larger friends.

At the time, I couldn’t imagine a better life — where every day held the promise of romantic drama and intrigue. Each time I walked into that bar, I just assumed I’d get a glass of wine tossed into my face by the end of the evening. And I looked forward to it!

Now, at 51, sitting across from a woman who wanted nothing more than to incite me, I refused to get riled. After all, it might negatively impact my blood pressure, which is far more thrilling to me these days than dyke drama.