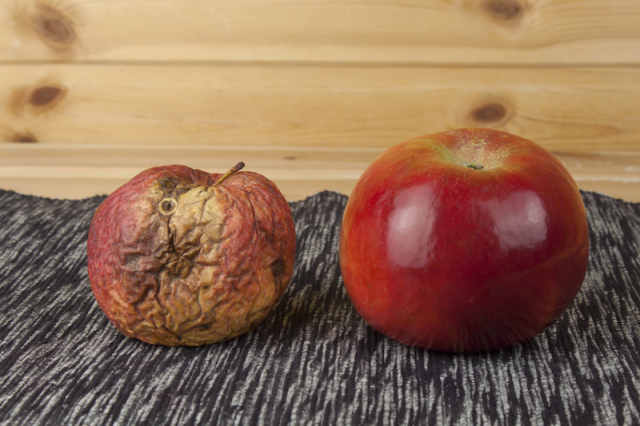 My girlfriend wants to do an experiment where we say terrible things to an apple for a week.

The apple conversation popped up while we were walking home from a grammar school science fair, where her fifth grade son was presenting a project. I’m not sure what his experiment was exactly; however, it seemed to require the indiscriminate spraying of food colors on every kitchen surface.

One of the young scientists at the fair presented the apple project. It involved her spending a week shamelessly flattering one apple, and insulting another one. At the end of the week, the favored apple was red, ripe, and juicy. Its sad counterpart was pale and mealy.

“Let’s insult an apple and see what happens,” my girlfriend said.

“You force me to buy nothing but organic fruit and now you want me to be mean to it?” I asked. “You’re a monster!”

This conversation took place right around our first anniversary. We first dated in 1990, but then took a short 25-year break before reconnecting last year.

A lot has changed in my life in the past year. I fell deeply in love, moved to the suburbs with my girlfriend and her kids, and started buying organic everything.

Before we reconnected, I had heard of organic foods, but I thought they were limited to fruits and vegetables. I had no idea there was such a thing as organic beans, popcorn, or tortilla chips. Turns out there is an organic version of just about every food, and they all are a million times more expensive than non-organic. But even though I don’t understand the definition of organic (grown in fields of diamonds and harvested by angels?), I began buying it exclusively because of love!

If I hadn’t been so blinded by love, I would have seen that this organic nonsense was a slippery soap that led directly to the laundry room. Sure enough, my detergents and bleaches were banished and replaced with something called “Soap Nuts,” which come in a package featuring an illustration of a hippie in a yoga pose.

“He doesn’t look like he’s ever taken a bath in his life,” I argued when first handed the package. “Why should I trust the cleaning power of his Soap Nuts?”

I can’t even discuss what happened to the fabric softener sheets. It’s too painful. Who doesn’t love soft, static-free clothes? A monster, that’s who!

Soon, my beloved bathroom products were under attack. I considered these bleach- and ammonia-based powerhouses more like friends than cleaning tools. Yet, I turned my back on them for love. Coward that I am, I couldn’t even look directly at them as I dutifully boxed them up and carted them to our town’s hazardous recycling center.

As we walked home from the science fair, in our clothes dulled to a milky gray by Soap Nuts, I decided I had finally reached my limit.

She studied me for a moment and then finally nodded her head.

“OK, I’m going to let you have this one,” she said. “But, tomorrow, you’re going to learn about just how dangerous your favorite coffee is. And then we’ll replace it with some nice organic herbal tea.”

I kicked a stone in frustration and entertained some dark thoughts about love. Stripping me of caffeine. She was playing a dangerous game.

I looked up menacingly, preparing to launch a full rebellion that would include the return of my full artillery of cleaning products. But there she was, smiling at me, and I knew I was defeated. Damn you, love!

“Fine. I’ll start drinking tea,” I conceded. “But I’m not being mean to an apple.”