Crossing Paths (And Paths And Paths) 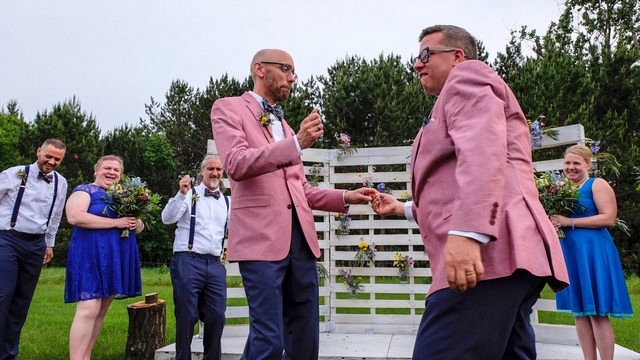 The love story of Eric and Chris Herr-Madsen was meant to be written from the very start.

Eric Herr, who worked professionally in theater for more than 18 years and currently works in customer service for a utility company, met Chris Madsen, who worked at the Minnesota Children’s Museum for more than 7 years, in various theater marketing and audience service positions, and currently works as a Clinique counter manager at Macy’s in Mall of America, and the couple immediately bonded over a shared interest in performing arts.

Though Eric and Chris didn’t meet until the two talked online and planned a dinner and movie date in Uptown, they found out that their paths had been crossing long before their first date.

“We discovered we could have met numerous times over the past five years in St. Paul because our jobs were on the same block, we took the same buses downtown, ate at the same lunch places, and lived in the same Grand Avenue neighborhood! It wasn’t until Eric moved to Uptown that the fates decided to let us finally meet,” Chris says.

Chris says the first date was spent discussing their favorite live shows, movies, and TV shows. During the movie, it was clear to Chris that Eric was someone to hold onto.

“Time flew during dinner, and we almost missed the movie. During the film, we started to hold hands, and I don’t remember much of the movie after that,” Chris says. “All I could think of was how right that hand felt and how I wanted to keep on holding it. The popcorn was quite neglected.” 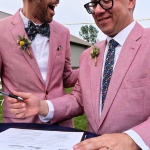 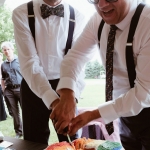 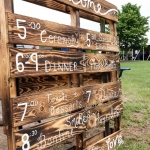 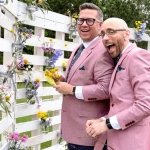 Eric, on the other hand, says he was plagued by first date jitters, but soon after meeting Chris, all of his nervousness melted away.

“I was so nervous, here was this handsome man who agreed to go on a date with me. I just remember not knowing if we’d have anything to talk about. Once the date started, I forgot to even be nervous as the conversation just fell into place,” he says. “[We discussed] our likes, friends, work, and before we knew it we were watching Melinda, Melinda at the Lagoon Theatre, holding hands, and perhaps a good night kiss! After that first date, I knew this guy was special and I really wanted to see him again.”

Before long, Chris and Eric were ready to tie the knot while camping at Gooseberry Falls in 2007 with some friends and their young daughter Natalie.

“One day we were walking along Pebble Beach, and she asked, ‘Where does Eric sleep?’ Her mother responded, ‘You know how mommy and daddy love each other and sleep in our room together? Well, so do Eric and Chris. They love each other very, very much, so Eric sleeps in the bedroom with Chris,'” Eric says. “Natalie took a long pause, thinking very intently, and finally she responded, ‘So, that must make you husband and husband!'” 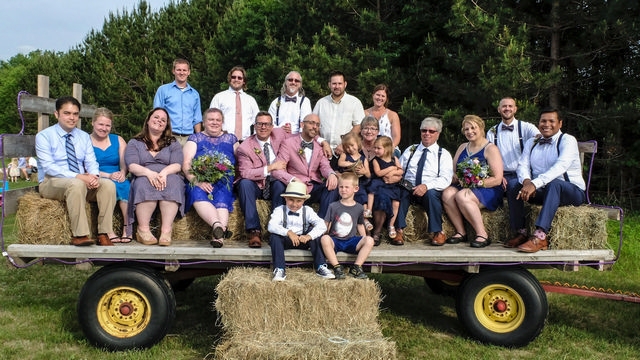 “I had planned a very romantic Valentine’s Day weekend at the Grand Superior Lodge. The big plan was to go on a cross county luminary ski through Gooseberry Falls and a hike on Pebble Beach the next day. What I couldn’t have predicted was the fact that it was 64 degrees that weekend and snow had melted, so the skiing became a beautiful hike through Gooseberry,” Eric says. “The following morning, as we were headed to Split Rock, I realized I couldn’t wear my jacket as it was much too warm for that and had to do my best to hide the ring. There on the shores of Pebble Beach, I started talking about the last time we were there and the wise words that young Natalie had spoken, at that moment I got down on my knee and asked my best friend Chris to marry me.”

Soon after, the couple was celebrating their love with 250 of their closest friends at their outdoor garden wedding. Their wedding party was comprised of friends they had known for 25 years or more, and Eric’s sister was his best lady.

“During the reception, guests enjoyed dining from Potter’s Pasties food truck and a table of appetizers, continued to play lawn games, enjoyed activities, and, after toasts and an amazing beat poem by some friends from Ireland, everyone enjoyed the Doughnut Wall for dessert. Hay rides and a s’mores bonfire rounded out the evening along with all the dancing,” Chris says. 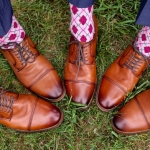 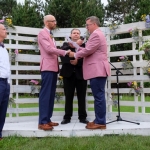 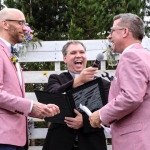 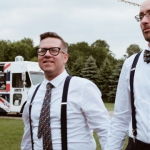 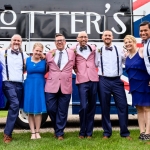 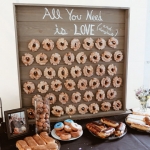 Eric says they like to call it their “DIY wedding” because they, with the help of many friends and family members, created the wedding decor themselves. Eric’s father even designed and built the stage that they tied the knot on.

“Everyone was having such a good time, and it felt like it was the best theatrical production we had ever been a part of. The emotions of love and the feeling of belonging to something bigger than just that day were felt by everyone. We had been through quite a journey to get where we were, and everyone was so happy to see this union,” Chris says.

After meeting in 2005, Eric and Chris are still celebrating the endless love that they share to this day. Eric says the love that he experienced on their wedding day—both from Chris and supportive family members—continues just as strongly every day with Chris as his husband.