Coming Out…Again: Speaking Up about Mental Health in the GLBT Community

If you walk past Kimberia Sherva or L.A. Jones on the street, you wouldn’t assume that anything is different about them. They both appear to be healthy adults going about their daily lives. But what the outside world doesn’t see is that both Sherva and Jones live with mental illnesses, along with over 25 percent of Americans. Indeed, most people with mental illnesses are (contrary to popular belief) very well integrated into society. Sherva and Jones, along with the Minnesota chapter of the National Alliance on Mental Illness (NAMI-MN), are trying to minimize the negative stigma our society places on mental illness.

Sherva and Jones are just two people from our GLBT community who deal with the double-stigma of being GLBT and living with a mental illness. Though anyone can be affected by mental illness, GLBT individuals experience a higher rate of mental illnesses than straight people. NAMI suggests that this increased inclination toward mental illness may be connected to challenges many GLBT people experience, such as “negotiating coming out, fear of or actual familial disapproval and rejection, victimization by peers, and the chronic stress associated with having a stigmatized identity.” The multiple discriminations GLBT people with mental illnesses face create a double-stigma effect that negatively impacts everyday life. 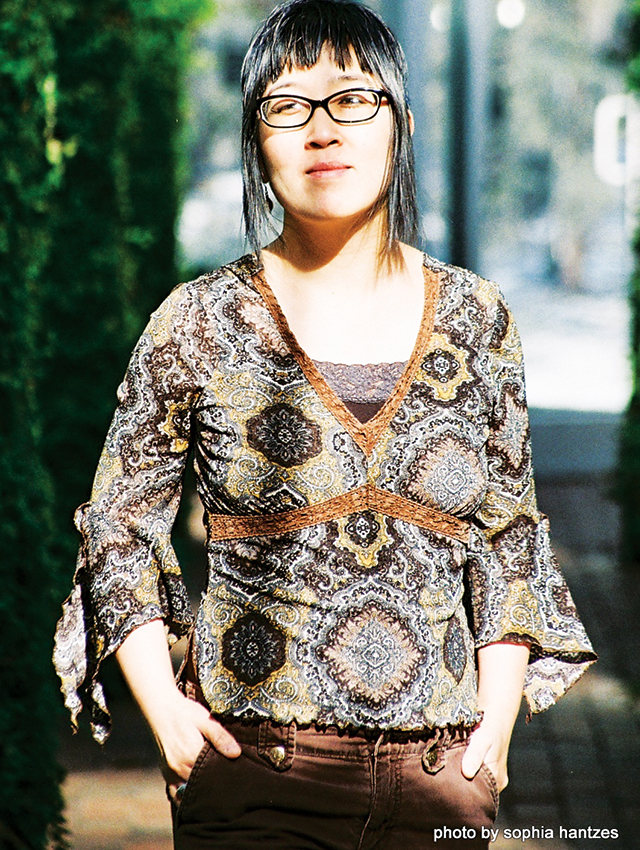 Kimberia Sherva was diagnosed with a mental illness at age 17. Sherva lives with greater depression, anxiety, PTSD, personality disorder, and suicidal ideation. Sherva volunteers as a group facilitator for NAMI-MN and is a presenter with NAMI’s In Our Own Voice program, which encourages people to share their stories of what it’s like to live well with mental illnesses. Photo by Sophia Hantzes

Brian Jost, NAMI-MN’s Director of Public Awareness and Peer Programming, explains the current mental health situation in our community. “People who are gay, lesbian, bisexual, or transgender have often faced discrimination, prejudice, and victimization. Studies indicate that these types of experiences are a strong predictor for developing mental illnesses. Suicide rates are higher, particularly for youth, who are three times more likely than straight youth to attempt suicide. Being rejected by family, discrimination, and bullying add to that risk factor.”

Our community faces an even tougher challenge: this double-stigma makes seeking treatment significantly more difficult. The standard mental health system may be unwelcoming to GLBT folks, and individuals may feel the need to hide their identities. Additionally, GLBT mental health organizations may not be fully equipped to provide services to individuals across the whole spectrum of mental illnesses. Education and training are therefore imperative for organizations that provide assistance to GLBT people with mental illnesses.

Sherva also acknowledges the “pull yourself up by your bootstraps” mentality of our society that expects people to “quit wallowing and move on.” People with physical diseases such as cancer or diabetes are not shamed for their illness, nor are they told to just get over it. However, mental illnesses carry a negative stigma because our society expects a person to get over or simply ignore anything that seems like weakness, specifically when the weakness is emotional or mental.

The negative stigma surrounding mental illness is even more damaging when it’s combined with the prejudices and discrimination GLBT folks face on a daily basis. Sherva explains that developing a more positive view of mental health in our community is urgent: “People are literally killing themselves because they’re too ashamed or afraid to get help or talk about living with mental illness. We have to be there for our community, period.”

We can combat the negative stigma connected to mental illness by speaking up, educating ourselves and others on mental health issues, and advocating for people with mental illnesses, especially in our community. Many of these solutions start on an individual level; by changing our own personal attitudes toward mental health issues, we can change the broader societal discussion.

It’s also important to remember that mental illness is just one part of a person’s identity; a mental illness doesn’t define the person. Just like many GLBT people advocate for being seen as more than their sexual identity, people with mental illnesses want to be seen as more than their diagnosis. Sherva adds, “I really do hope that someday, people can say ‘I live with bipolar’ or ‘I live with schizophrenia’ and no one bats an eye because it’s a health condition like living with high blood pressure or high cholesterol.” 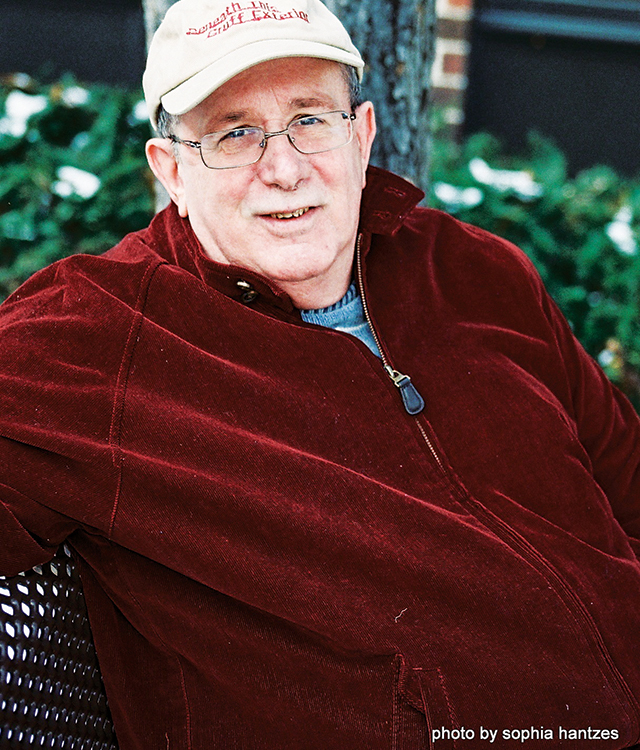 L.A. Jones was diagnosed as schizophrenic with severe psychosis in 1984. After going into recovery, Jones came out of the closet as a gay man. In 2012, Jones was committed to Hennepin County Medical Center with chronic alcohol poisoning and benzodiazepine addiction. Since going through treatment at the Pride Institute, he has been substance-free. Jones’s current diagnosis is bipolar disorder with severe panic anxiety disorder, and he currently volunteers as a group facilitator for NAMI-MN and participates in the Mental Illness Chemical Dependency Support Group at Vail Place. Photo by Sophia Hantzes

Another way that we can change the conversation about mental health is to change our language. Using words like “crazy,” “schizo,” or “psycho” to describe people or situations perpetuates a negative attitude toward those with mental illness. For people with mental illnesses, those phrases can be just as offensive and hurtful as phrases like “that’s so gay” and “no homo” are to the GLBT community. Additionally, Jones suggests that people adopt a “people first” language when referring to individuals who have mental illnesses. Instead of saying “the mentally ill,” it’s more humanizing to say “people with mental illnesses.”

We can also combat stigma by educating ourselves and others on mental health issues. NAMI believes it’s important to stress that mental illnesses are “not the result of personal weakness, lack of character, or poor upbringing.” People who have mental illnesses are not at fault or to blame for their conditions, and they should not be ashamed of their illnesses.

Jost reminds, “We need to recognize that people do recover, they do get better. There are people living with mental illnesses all around us. Let’s recognize the struggles and barriers they have faced and the gifts that this then brings to our communities. Not only can this shape people in the arts — writers, actors, artists, singers — but it can also lead to greater empathy for all those who have faced discrimination in their lives.”

People should also be aware of their options when it comes to treating mental illnesses. No single treatment plan is going to work for everyone, and individuals should speak with medical professionals about their intended treatment. Developing a proper treatment plan takes time and effort, and individuals need to find the proper balance of medication, talk-therapy, and peer support for their specific situation. Sherva has developed a plan that combines “talk therapy with the right medication to really help me live with mental illness and do the day-to-day things I want to do.”

Both Sherva and Jones incorporate peer support groups into their treatment plans, and they both are facilitators for NAMI’s LGBTQAI Connection groups. This program is unique because it is not run by medical professionals, but rather is run by people who have the experience of living with mental illnesses. Jost explains, “NAMI Connection is a weekly recovery support group for people living with mental illnesses in which people learn from each other’s experiences, share coping strategies, and offer each other encouragement and understanding.”

Sherva and Jones went through an application and interview process to be selected as facilitators and then went through training to learn how to facilitate group discussion in an inclusive, safe, and productive way. Jones clarifies that they are “not therapists — we’re facilitators. Just peers.” This peer relationship, Jones believes, is a lot less intimidating for people. Another benefit of peer support groups is that participants are receiving advice and support from a less clinical perspective, allowing them to relate to the lived experiences of others.

Another benefit of NAMI’s Connection groups is that GLBT people have a safe space where they are embraced for who they are. Jost states, “We believe that recovery is possible for anyone no matter what community a person identifies with.” These groups allow for people to connect with both other GLBT people and others who are living with mental illnesses. Sherva says, “Just being with other GLBT people gives a lot of people a sense of security and safety.”

Through his volunteer position as a group facilitator, Jones has noticed the benefits of helping others and serving the community. He states that “people who tend to not get out and who stay at home and are depressed and who concentrate on their symptoms” are less likely to recover from mental illness. “If you focus outward on others, it just relieves your own symptoms that much more.”

Finally, we can improve how our society views mental health by being supportive advocates for people who have mental illnesses or might be dealing with mental illnesses that are not diagnosed. Jones believes that people should not be afraid to reach out if they see someone struggling. If someone knows that they can ask for help without judgment, it will be more possible for them to get the help they need.

Jost encourages people to not be afraid to seek treatment. Individuals can initiate a conversation with a physician, or reach out to a county mental health crisis team in an emergency. If people are unsure about how to seek help, NAMI-MN’s website offers information and links to various mental health resources.

Additionally, Sherva suggests that individuals who are struggling find a support network of people who will understand, support, and encourage them. Sherva believes that having a sense of humor and patience helps, adding that “a person can sure get down on themselves for struggling at times or having to go to the hospital or needing to change their treatment plan. That’s not fair to them. People need to give themselves breathing space, too.”

We should also encourage people to feel empowered to advocate for their own needs. Sherva notes, “If something isn’t working, whether it’s a treatment plan or medication, they have the right to ask for a change. Advocating for themselves helps when getting back onto one’s feet and feeling like one’s in control of their life.”

This sense of control and empowerment can make a huge difference as people recover from mental illnesses. Living as a GLBT person with a mental illness isn’t easy, but with proper support and treatment, it is possible to not only survive each day but also thrive. Within our community, we can make a concerted effort to support and advocate for people with mental illnesses. By changing our own perceptions on mental health, we have the power to alter the whole conversation. We can come out as advocates for mental health as we break the silence and share our experiences. Together, as a community, we have the power to foster a more positive outlook on mental health.

For resources or more information on how to get involved, visit www.namihelps.org.