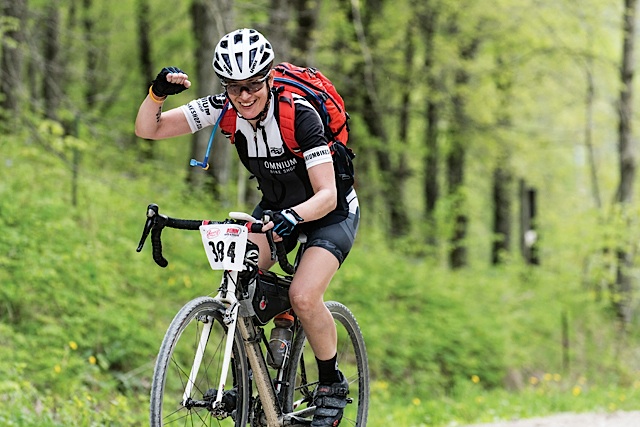 It’s like the Tour de France but with more mosquitoes. It’s like Walden but with less symbolism. It’s like Brokeback Mountain but with fewer sheep. It’s the second annual running of Le Grand du Nord Gravel Cycling Classic, and it’s grinding its way toward the present.

According to the event’s website, “Le Grand represents one of the most amazing gravel courses in the United States. Starting out of Grand Marais, Minnesota’s spectacular harbor, the route climbs to a breathtaking view of the U.S./Canadian border.” That breath will be taken, in many turns, on Saturday, May 27.

The event is presented by Heck of the North whose founder and director, Jeremy Kershaw, says that he “has watched The Heck of the North transform the lives of people who have not necessarily identified as ‘athletes,’ including some pretty inspiring women.” One of those inspiring women (who is very much an athlete) is Dr. Pamela Gonzalez, a pediatrician specializing in addiction medicine in the Department of Psychiatry at the University of Minnesota.

What drew Gonzalez to Le Grand du Nord was “mixing physical challenge with experiencing the beauty of Minnesota.” The physical challenge part is starkly obvious: cyclists circulate through the northern hinterlands on gravel arteries that wend and wind for a full 100 miles and culminate at a height of 6,000 feet. Such travails might discourage other riders, but they only serve to drive Gonzalez toward self-styled greatness. Says she, “Long events are both challenging and energizing.”

Despite its length, or perhaps because of it, Le Grand du Nord is not officially a contest, but compulsively competitive riders sometimes go into business for themselves, according to Gonzalez’s experience. “It’s a race for some people,” she observes. “They can’t help themselves.”

As with the operation of any finely tuned machine, fueling a distance cyclist’s body is is no small consideration. Such is the case with Gonzalez as she rides, but in a way most of us can only dream about. “I burn a lot of calories just sitting still,” Gonzalez says. “Cycling makes it worse. Anything longer than three or four hours, and l need to get protein and fat calories mixed in. I try to eat as much real food as possible, but I am not turning down pizza or another cookie, ever.”

This fueling can factor into the 100-mile journey itself. “Keeping myself properly fed and watered is also challenging,” Gonzalez points out. “This event is relatively short, compared to ultra events, so for me, there aren’t any mind tricks that come into play. I’m energized by hours alone. Solitude recharges my battery.”

The event’s solitude, however, can sometime prove imperfect in the best way possible. Gonzalez explains, “It’s a good mixture of solitude, but [cyclists are] still looking out for each other. When coming upon another rider on the side of the road, and someone asks, ‘Do you have everything you need?’ they mean it and are ready to stop and help.”

Preempting the need for such help involves training of a nearly monomaniacal scale. “Cycling, and more cycling,” Gonzalez reports. “All my training is cycling-specific, including core and strength work.”

In addition to these considerations, Gonzalez also enjoys the advantage of familiarity, as she attended last year’s inaugural version of Le Grand du Nord. Her recollections are reminiscent of an Impressionist painter’s shades and tints. “I did participate in the first,” she remembers. “It was foggy, which I thought was a visually enjoyable way to take in the landscape. This year could be different if there isn’t fog, as [event director] Jeremy Kershaw purposely put in a tiny detour to a scenic overlook last year. He’s purposeful about the challenges and vistas.”

Although Gonzalez can easily be counted among Le Grand du Nord’s inspiring women, she finds that becoming an inspiration often begins with being inspired. “If you want to spend more challenging time on a bike, and want to see beautiful spaces in Minnesota,” she concludes, “this is definitely an event to check out.”