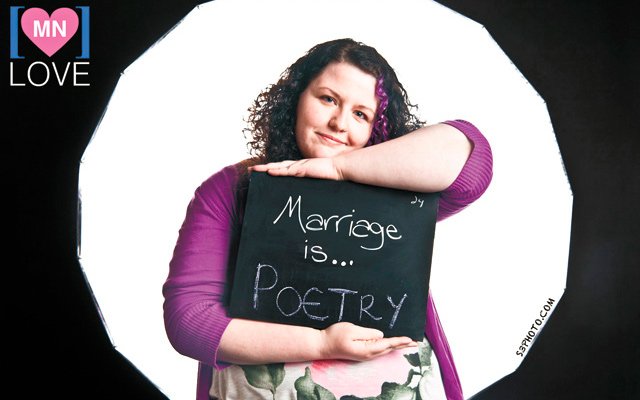 Organizations, corporations, clubs and individuals across Minnesota and beyond have begun the battle to defeat next year’s statewide vote to constitutionally ban same-sex marriage.  One of the more clever, creative groups lending their hand to the cause is [MN]Love.

[MN]Love is a platform for people to engage in a statewide dialogue about marriage equality.  Whether it be through our “Marriage is…” photo shoot campaign or our letter-writing campaign, we seek to connect Minnesotans to other Minnesotans so that we can defeat the 2012 ballot initative that seeks to insert hate into our state Constitution.  We have many tricks up our sleeves between now and November 2012, so stay tuned!  =

The group’s photo campaign—artistry by Simon Scott Stromberg–has brought them all over the state, including many of Minnesota’s annual pride festivals.  Says Brandon,

In light of the upcoming ballot initiative that narrowly defines marriage as between one man and one woman, we introduced our “Marriage is…” photo shoot campaign.  This campaign is not meant to redefine marriage, but instead is a chance for Minnesotans, of all backgrounds, to visually depict what marriage means to them.  We encourage people to share these photos with others in an effort to have a continuous and expansive dialogue about why marriage equality matters.

Anyone interested in participating in or learning more about their photo and letter campaigns can contact [MN]Love’s outreach director, Betsy Narr, at [email protected]